Browse: Home   /   Join us and the Clinica Mobile 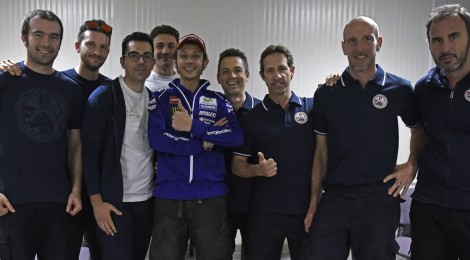 Join us and the Clinica Mobile

Do you know what is the Clinica Mobile? Clinica mobile is a mobile hospital housed in a truck specifically equipped to provide medical support to motor bike riders at races all over the world.

Dr Michele Zasa will talk about how and where the clinic operates and of his experiences with famous riders.

When: Wednesday, 24 February at 7pm

Motorcycle racing is associated with inherent dangers, so medical assistance onsite at each circuit is of vital importance.

Life-threatening crashes have been diminishing over the past few years, thanks to the better safety features developed in the last decades. Improved medical presence at every race has also been crucial to ensure the safety of pilots and their staff.

A prominent role in terms of safety and medical rescue in the last 40 years has been played by the world motorbike championship travelling medical facility.

An Italian Doctor, Dr Claudio Costa, formally founded Clinica Mobile in 1977, and since the very beginning, the Clinica has played an essential role in motorcycle races.

The Clinica Mobile is fully staffed with Italian medical professionals and it is a mobile hospital housed in some trunks specifically equipped with medical devices. These include X-ray machinery, medical ventilator, physiotherapy beds, High Intensity Laser Therapy and thermotherapy machineries.

Everybody can seek advice or treatment at Clinica Mobile; illnesses treated vary from broken bones to flu, sore throats, seasonal allergies, etc. This service is provided not only to professional riders. Although they and their staff are the most regular patients of the Clinica Mobile, its services are provided to anybody working at the circuit on Grand Prix, including journalists, stewards, chefs, mechanics, team managers.

In the early days of World Championship racing, medical facilities were often far from adequate. Dr Claudio Costa set out to fix this in the early ‘70s. The travelling medical facility has its origins in Italy, where Checco, Dr Costa’s father, was the organiser of motorbike races at the Imola racing circuits. Dr Costa realised that he and his team of specialists could be of help at Grand Prix venues throughout the world.

Dr Costa’s staff started travelling to each Grand Prix carrying boxes of medical equipment to attend to patients. A more portable clinic became a reality when a mobile unit was presented at the Salzburgring (Austria) race on 1 May 1977.

Since then, Clinica Mobile staff have been involved in saving many riders’ lives, including Franco Uncini, Philippe Coulon, Michael Rougerie, Virginio Ferrari, just to name a few of them.

Since then, the Clinica Mobile unit has evolved to keep pace with the latest medical advances.

Its importance has been recognized by prominent figures, such as Pope John Paul II, who blessed it in 1988, and King Juan Carlos of Spain, who visited the clinic in 1997.

The Clinica Mobile’s role has changed over time, with the building of permanent medical centres at each circuit to provide the equipment, staff and hospital back-up to deal with life threatening emergencies.

Today, medical personnel both on the track and in the circuit medical centre treat riders who crashes in the track, where they are moved immediately after the crash. However, a doctor from Clinica Mobile is with them since when they arrive at the medical centre, and brings them to the local hospital in situations requiring a transfer. In less serious cases, riders are discharged from medical centres and sent to Clinica Mobile for further treatment.

Most part of Clinica Mobile work is related to providing generic medical treatments, pain therapy, orthopaedic advice, imaging evaluation. Two doctors attend each race – an anaesthetist and an orthopaedic – together with four physiotherapists, and a radiologic technologist.

Not only the Mobile Clinic is a centre for acute conditions treatment, but it is also a place where riders come to relax after tough practice and qualifying sessions, and where they can receive physiotherapy treatments, if needed.

Clinica Mobile is an established reality, well-known among motorbikers from all over the world, and even the International Motorbike Federation (FIM – Fédération Internationale de Motocyclisme) recognize its role in the FIM Medical Code. Media coverage of the Clinica Mobile’s activities is significant, as well.

MotoGP is the most famous motorcycle racing world championship, visiting four continents and with pan-global television coverage. Established as a World Championship by the FIM (Fédération Internationale de Motocyclisme) in 1949, it is the oldest motorsports championship in the world and the premier class of three racing classes that take to the track on a typical Grand Prix weekend.

MotoGP has a rich history with Grand Prix events having taken place in every corner of the world throughout the last 62 years. More than 2.2 million people attended the circuits to watch MotoGP in 2011. Italy, Great Britain, Spain, the USA and Australia are just some of the countries scoring high in terms of race victories and world titles. Over 200 countries broadcast MotoGP events, with races reaching over 330 milions houses worldwide.