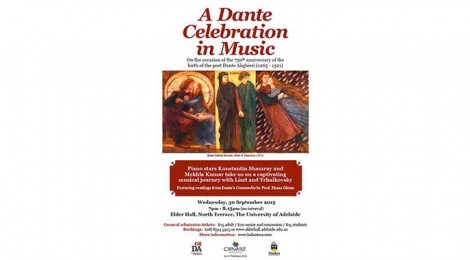 A Dante Celebration in Music

The Dante Alighieri Society of South Australia was created 50 years ago so there is cause for double celebrations.

There have been other occasions this year when these important milestones have been observed and now we turn to A DANTE CELEBRATION IN MUSIC which will be held in the superb acoustics of Elder Hall on Wednesday 30th September at 7pm.

The Dante Alighieri Society is thrilled to have secured the services of pianists Konstantin Shamray and Mekhla Kumar who will take us on a captivating musical journey with Liszt and Tchaikovsky.

Konstantin is well-known to Australian audiences having distinguished himself as the first competitor in the history of the Sydney International Piano Competition to win both First Prize and People’s Choice Prize, in addition to six other prizes in the 2008 event.

Adelaide-born pianist Mekhla Kumar is a favourite with local audiences having been awarded several awards such as the Elder Conservatorium and Helpmann Academy “Emerging Artist Award” as well as a grant from the Ian Potter Cultural Trust.

Together they will play a 4-hand arrangement of the Francesca da Rimini Symphonic Fantasy by Tchaikovsky. Also on the program is the famous Dante Sonata by Franz Liszt – another virtuosic work inspired by La Divina Commedia.

Interspersed between the music, Professor Diana Glenn from Flinders University will read excerpts from Dante’s masterpiece.

Media enquiries, please contact Eugene Ragghianti at eragghianti@cicinc.com.au or on 0408 375 846.

EVENT: A Dante Celebration in Music

The forthcoming concert is organised by the School of Humanities and Creative Arts, the Dante Alighieri Society and Carnevale. We have two superb pianists, Konstantin Shamray and Mekhla Kumar, who will perform a four-hand arrangement of the Francesca da Rimini Symphonic Fantasy by Tchaikovsky. Also included in the program is the celebrated Dante Sonata by Liszt. The music will be interspersed with readings by Diana Glenn from Dante’s Divine Comedy.

Konstantin Shamray was born in Russia in 1985 and his international musical career was launched in 2008 as the Winner of the Sydney International Piano Competition (First Prize and People’s Choice). He has recorded (for ABC-Classics and Naxos) the last set of 18 piano pieces (Op. 72) by Tchaikovsky and his Grand Sonata, as well as works by Scriabin and
Prokofiev.

Mekhla Kumar Adelaide-born pianist Mekhla Kumar is currently undertaking a performance PhD on the Liszt Sonata in B Minor at the University of Adelaide. She has undertaken a Masters at the Hochschule für Musik in Freiburg, Germany, under the tutelage of Dr Tibor Szsasz and in 2012 she received the “Emerging Artist Award” from the Elder Conservatorium.

We look forward to seeing you there!

From the organisers: Luciana d’Arcangeli, Diana Glenn and Eugene Ragghianti