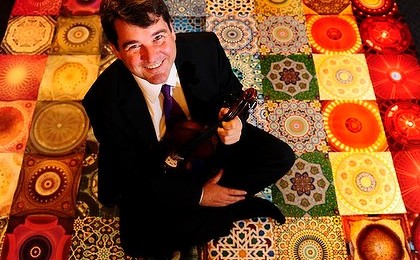 An hour with Chris Latham

On 6 November we welcomed for the second time Chris Latham, Artistic Director of Voices in the Forest and WWI-related projects. This time he came to talk to us about the ‘squillo’, which is “a technical term for the resonant, trumpet-like sound in the voices of opera singers. It is easily recognizable by the distinctive brilliant, ringing quality in the timbre of the voice”. Chris went on to say that this was the secret of great Italianate tenors (eg Giuseppe Di Stefano, Luciano Pavarotti) who were able to sing with power rather than force so as to be heard above orchestration. The pitch has to be at a certain frequency to be effective. Chris talked about harmonics and demonstrated resonance and voice projection by effectively using his diaphragm. We discovered he has a very good voice too – he is actually a violinist by profession.

Chris also played excerpts from opera arias sung by the three main singers who were to be featured at Voices in the Forest, an event scheduled for 30 November at the National Arboretum. The singers were NZ tenor Simon O’Neill, baritone Peter Coleman-Wright and the amazing Latvian soprano Inessa Galante.

Inessa is internationally famous for her interpretation of Caccini’s Ave Maria. If magical singing moves you and you appreciate limpid soaring notes, then I highly recommend listening to this piece on YouTube. You may then wish to listen to the same Ave Maria sung by Andrea Bocelli. When I checked both in mid December, I was amazed to discover that Bocelli’s rendition had attracted nearly 3 million hits compared with Inessa’s 433,000. There is a world of difference between the two interpretations and without hesitation I opt for Inessa’s.

Chris Latham’s presentations are always much appreciated by Dante members as he’s an engaging, disarming, knowledgeable and interesting speaker. He will return during 2015.