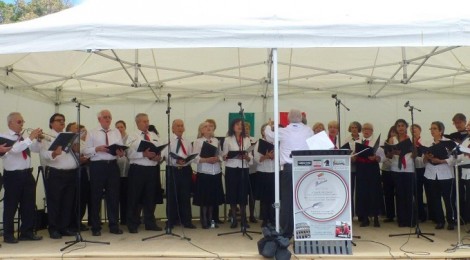 Our beautiful choir, Dante Musica Viva, has had an exciting and very busy year and is looking forward to a bit of rest!

As usual, we opened the year with a performance at the National Multicultural Festival in February. In March we sang at the Palm Sunday Friulani picnic at Edison Park, a picnic that attracts some 250 people each year. We then worked very hard to prepare for three major concerts. In early May we travelled to Griffith where we entertained a large audience of enthusiastic Italo-Australians migrants. (We were so popular that they invited us back as soon as we can manage it, promising an even larger audience next time.) Then in late May we performed at our own annual concert at the Italo-Australian Club and on 31 May at the Italian Cultural Centre on the occasion of community celebrations for Italy’s national day.

It was also in May that we launched our second CD – Nostalgia d’Italia 2 (available for $15 through the office or our choir manager, Saverio Palma). The CD has 20 tracks ranging from the sublime to the ridiculous – ie from opera arias (like Il coro delle zingarelle) to short folk songs in regional dialects (like E chi che toca la mia morosa).

The second part of the year started with a concert in July for the Giuliani Association’s ‘Festa de le fritole’ (festival of a sort of sweet dumpling popular in the N-E of Italy) and then DMV focussed on a combined choral performance at Llewellyn Hall (held in September) as part of a major fund-raising concert for the neo-natal unit of Canberra Hospital. It was a tremendous experience for our choir to sing on stage alongside more experienced choirs.

November was another particularly busy month: on the 8th we performed at the first Festa Italiana in the Embassy Gardens; on the 22nd at Queanbeyan’s Italian Community Festival; and on the 26th at the Dante end-of-year function. In December we were asked again to sing at the Multicultural Awards Ceremony, and at the Giuliani Christmas picnic at Weston Park. We are taking a little break over the festive season before gearing up for the 2016 National Multicultural Festival (13 February).

As part of our series Know your choir, this time we feature Brian Proctor. Brian is one of about ten ‘foundation members’ of the choir, as you can read in this article prepared by him. Brian has been a keen student of Italian for several years. As a regular and dedicated member of the choir, Brian sometimes steps in to form our ‘three tenors’ team when one of the regular tenors is absent. And his career has taken him from country teaching to the bar (and it’s not the drinking-type of ‘bar’…). Here is his story.

“I was born in Maitland NSW in 1941 and lived there until I was about 20. After finishing school I accepted a Teachers’ College Scholarship and did my BA and Dip. Ed. at Newcastle University College as it then was. While I was at Uni I was a member of a choir conducted by Professor Bryn Newton-John, father of Olivia.

I taught in NSW high schools for seven years teaching English, History and Latin at Cowra, Hay, Sydney Boys’ High School and Caringbah. While I was at Hay I joined the local amateur drama group and there met my wife who was also teaching there. Last year we celebrated our 50th wedding anniversary.

While I was teaching I studied law and was admitted as a barrister in 1968. I worked in various legal positions for the remainder of my working life and have now been retired for a few years. I came to Canberra in 1981 to take up a position as Registrar of the ACT Supreme Court and thought at the time it was likely that after a few years my family and I would return to Sydney. However we liked the lifestyle here and the idea of living elsewhere soon became out of the question.

I went to Italy in 2005 in a U3A group led by Ottavio Bagozzi and on my return decided to learn Italian. I enrolled in the Dante grammar classes at Telopea Park School and also joined a conversation class and the Dante choir. I have now been a member of the choir for over 10 years and have seen many people come and go. It’s very pleasing to see that the continuing membership has increased from the handful of members at the beginning to over thirty or forty. In the first few years the rehearsals were held after the conversation classes finished at 9pm and attending those rehearsals until 11pm was quite demanding. I was very pleased when it was decided to have the rehearsals before the conversation classes and not afterwards.

Although some of our songs are in dialect, most are in Italian and I have found that singing in Italian has greatly improved my pronunciation and vocabulary. I have also learned a lot about Italy as we hear a lot about the background of each new song we sing. I have enjoyed the challenge of performing for both Italian and non Italian groups. A particularly memorable experience was the recent concert to celebrate the 20th anniversary of the Neonatal foundation when our choir was part of the massed choirs who sang on the Llewellyn Hall stage. In the program I was listed as the only tenor from the Dante choir.

Apart from the Dante groups I have been a member of several U3A Italian classes and have done two courses run by the Continuing Education Group of the ANU. Other activities include an exercise class once a week, attending weekly meetings of a Men’s Shed and attending a bird-watching walk once a month.

In 2011 I had a second trip to Italy this time in a group led by Julie Docker of the ANU.”