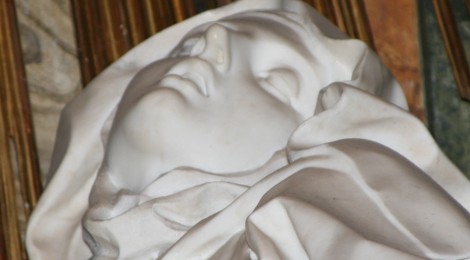 Returning to us for the fourth year in a row, Gordon Bull (Senior Lecturer at the ANU School of Art) gave us an enthralling presentation on Bernini – the major figure of Italy’s Baroque period. Gordon had introduced us to Caravaggio in 2011, Raffaello in 2012 and Tiziano in 2013.

Stressing that Baroque is a style characterised by “theatricality”, Gordon described Bernini (1598-1680) as primarily a sculptor but also an architect, painter and draftsman. Indeed, these days we would see him as multimedia man: his workshop employed all types of craftsmen including guilders, plasterers, woodworkers and stuccoists.

Bernini’s output over his long life was “enormous” – his fountains can be seen in the major squares of Rome including Piazza Navona, Piazza Barberini, Piazza di Spagna and Piazza Minerva; he produced some 300 paintings (he was a “Caravaggist”) and a number of stupendous statues each with their own narrative; St. Peter’s Baldacchino and the altar to Alexander VII (in which he portrayed the victory of faith over death) inside St Peter’s Basilica. His most admired work is probably the majestic design of St. Peter’s Square: his is the elliptical colonnade that seems to symbolise the arms of the church embracing the faithful.

Gordon treated us to a series of wonderful images of the best-known and loved statues of Bernini. These include Gordon’s favourite, the “amazing” Apollo and Daphne with its flowing drapery, its dynamic movement and the leaves sprouting from Daphne’s fingertips as she tries to escape Apollo. Other statues, also shown to us from different angles, were Pluto and Proserpina (in which Pluto sinks his fingers in Proserpina’s flesh as he drags her to the underworld); Aeneas fleeing Troy with his father and son; and Bernini’s own version of David in which he portrays the illusion of life and power in David’s movement and torsion.

Gordon also showed us the Ecstasy of St. Teresa in the Cornaro Chapel at S. Maria della Vittoria – a “theatre design in polychrome marble, wood and stucco” – and a number of great portrait busts including one of the French king Louis XIV.

Bernini was not only an extraordinary artist but also a good businessman. He enlisted the support of important patrons that included Cardinal Scipione Borghese, four popes and the French king Louis XIV. Gordon highly recommended a visit to Galleria Borghese in Rome where many of Bernini’s statues are held.