Browse: Home   /   How Italy is portrayed in the Australian media 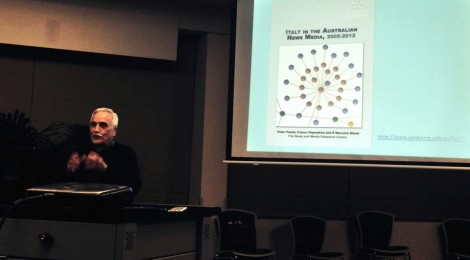 How Italy is portrayed in the Australian media

On 17 July, Franco Papandrea gave a fascinating talk to the Dante conversation group on how Italy is portrayed in the Australian media.

Franco is well known to readers of this newsletter as president of the Canberra Committee of the Dante Society. What some Dante members did not know is that he is also an expert in media research. As Adjunct Professor at the News and Media Research Centre (NMRC) of the University of Canberra, he co-authored (with Prof Peter Putnis and Prof R Warwick Blood) a report entitled Italy in the Australian News Media, 2005-2012.

As Franco reminded us, national pride can be very sensitive and easily bruised. As Australians, we feel offended if Australia is portrayed negatively in international media (e.g. as racist in relation to attacks on Indian students). Italy is the land of la bella figuraand projecting a positive image is part of the national psyche. So Italians are very, very concerned about how Italy is portrayed.

No nation is free of stereotypes. They colour our perceptions and behaviour. Most stereotypes have a grain of truth, but are expanded and extrapolated in such a way as to be offensive. Often, the intention is not offensive, but the effect is. Franco gave the example of the German magazine Der Spiegel, which accompanied an otherwise serious article about Italy with a cover picture of a gun in a plate of spaghetti. The picture was meant satirically, but by focusing peoples’ attention on the stereotype of Italians as pasta-eating mafiosi, it detracted from the content of the article.

However, the purpose of the NMRC report was far broader than an examination of the use of stereotyping. The authors identified all of the stories about contemporary Italy that were published between 2005 and 2012 in three newspapers – The Australian, The Sydney Morning Herald and The Age. There were 5325 stories in all. (The report also looked at 932 stories from television news, going back to 2008, but in his talk Franco dealt only with the print media.)

A number of factors favour Australian media interest in Italy, including: Italy’s economic importance in Europe and the world, its importance as an Australian export market, its historic role, its role as a sporting nation and as host of important sporting events, as well as the links forged by Italian immigration to Australia. To estimate the extent of this interest, the report’s authors compared the number of Australian newspaper stories about Spain, France, Germany and Italy during the 2005 to 2012 period. It found that France was the subject of the largest number of stories in all years except 2006, when Germany was first. (Germany hosted the World Cup that year.) Germany was in fact the second most reported-on country for the first half of the period studied. However, it was overtaken in 2009 by Italy, which then remained ahead.

The peaks in reporting on Italy were in 2006 (corresponding to its World Cup win and the Turin Winter Olympics) and 2011 (the Global Financial Crisis and political scandals around Silvio Berlusconi).

The biggest subject category of reports about Italy was sport, with 1555 stories. However, Franco pointed out that sport by its nature gives rise to large numbers of short newspaper items, reporting scores for example. Other categories were the arts (502), business/industry (389), fashion/design (466), international affairs (565), politics (644), travel/tourism (413). There were 791 stories on “other” subjects, including major earthquakes in Italy and the Costa Concordia disaster. Apart from this ‘other’ category and sport, the numbers across the categories are fairly consistent. This shows that there is no particular bias in the Australian media as to the subject areas to be covered, but rather a significant interest in contemporary Italy across the board.

In 2009, The Australian started to focus on Silvio Berlusconi’s personality and scandals. In that year, The Australian published 76 stories which referred to Mr. Berlusconi in the first paragraph. The report assessed that of these, 2 were positive, 19 neutral and 55 negative. It is probably no coincidence that this occurred after Mr. Berlusconi and Rupert Murdoch, owner of The Australian, had fallen out. (Mr. Berlusconi’s government had increased taxes on Mr. Murdoch’s Italian pay–TV operations, which were in competition with Mr. Berlusconi’s own media empire.) Franco did note however that, internationally, other major newspapers – many not owned by Mr. Murdoch – were also highly critical of Mr. Berlusconi.

After Mr. Berlusconi left office in 2011, Australian media interest in Italian politics dropped. The three newspapers had a total of 150 political stories in 2011, and 30 in 2012. Reporting also changed in tone, becoming more serious, and most stories were neutral or positive.

What of harmful stereotyping of Italy in the Australian media during the period studied? There was controversy in 2009, when an article in the Australian Financial Review, criticising Italians’ supposed apathy about Mr. Berlusconi’s behaviour, was accompanied by a cartoon map of Italy. The cartoon used crude language to re–name Italy’s cities and regions, reflecting offensive stereotypes. Complaints by Italian-Australians led to the newspaper publishing an apology.

However, based on its examination of thousands of stories, the report concluded that there was no underlying negative image of Italy in the Australian media. Neither did it agree with criticisms made in some quarters that Italian affairs were neglected or marginalised in the Australian media.  Rather reporting on Italy showed significant, serious, interest across a broad range of subjects.