Browse: Home   /   James Joyce and his life in Trieste 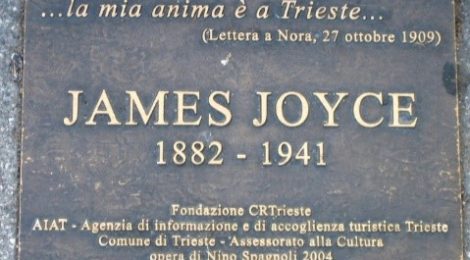 James Joyce and his life in Trieste

Trieste was at the same time the background and the protagonist of a period of Joyce’s life between 1904 and 1919. Trieste had been under the Austro-Hungarian Empire and was one of the most important cities in Europe. Joyce moved to Trieste in 1904 to teach English at the Berlitz School. He also became a private teacher of English and Italo Svevo (Ettore Schmitz) was his most famous student and his great friend. During World War I Joyce moved to Zurich and returned in 1919 but for only nine months. There are many stories about Joyce’s time in Trieste. As soon as he arrived at Trieste’s station, aged 22 and penniless, he was caught in a brawl while his future wife Nora Barnacle was waiting for him on a park bench opposite the station. He based his life in Trieste on the teaching of English and wanted to become part of the community. His young son and daughter went to the local school, where they picked up the harsh Triestine dialect.

The period Joyce spent in Trieste represented for him a phase of intellectual growth, a progressive ‘revelation of reality’, an epiphany, which led him to understand life and literature, as confirmed in various collections of correspondence, manuscripts and ephemera.

His collection of short stories, Dubliners is set in Dublin, but it was completed in Trieste. In Dubliners he explores the eternal phases of human life, childhood, adolescence, mature age and public life. In each phase, the main characters become aware of the sense of their life, through a sudden revelation, an epiphany triggered by an object, a place or even a weather event. We may say that, on a large scale, Trieste represented for Joyce an epiphany itself, a place where he attained self-knowledge and where he explored his growing self. In Trieste, he started to work on Ulysses, which would make him internationally famous, and on a play, the Exiles. In Trieste, he published his poems, Chamber Music, and his autobiographical poem Giacomo Joyce. Italo Svevo, his great friend, became for Joyce an inspirational source even for the creation of the character of Ulysses’ protagonist, Leopold Bloom. Joyce and Svevo discussed life and literature. Together they explored writing techniques to express the flow of thoughts, the stream of consciousness for Joyce and the more controlled autobiographical style of Svevo.

Every year on June 16 it celebrates Bloomsday (Bloomsday is the day on which all the events of Joyce’s Ulysses occur). The Museum also offers an itinerary through the city of Trieste to allow visitors to discover Joyce’s places. Visitors may start from the railway station where Joyce arrived in 1904 with Nora, once in piazza Grande, today called piazza dell’Unità d’Italia, and then walk to the streets where Joyce lived in rented apartments. An iconic place to visit is the Berlitz School in via san Nicolò, where he taught, close to the Stella Polare Caffè, in Via Sant’Antonio, home to the local intellectuals. It is possible to stroll from the Greek-Orthodox Church he attended in Riva 3 Novembre, to the local Newspaper Il Piccolo he wrote for, to the brothel in Via del Pane, located between the Jewish ghetto and the seaside district of Cavana, an area with at least 40 brothels at that time. Joyce was also a regular at the Art Nouveau bakery and pastry shop Pirona, in Largo Barriera Vecchia, which is worth visiting. Joyce might have not been wealthy while in Trieste, but he liked certain pleasures such as eating out, drinking, buying books and going to the theatre. He used to buy cheap seats at the Teatro Verdi, in the upper loggione where the opera was just as captivating for him.

Trieste also hosts a famous statue of James Joyce, by sculptor Nino Spagnoli, positioned on the bridge in 2004 to celebrate the 100th anniversary of Joyce’s arrival in Trieste.