About 4 years ago I went with a friend to a concert at the Italian Cultural Centre. There were groups representing different cultures. I was impressed by the Italian choir’s free and easy style of performing, especially Yvette Devlin who was “moving and a’shaking”. After the performance Livio Chicco mentioned that anyone was welcome to join. And the rest is history! I have been in the choir ever since.

I was born in Belmore, NSW, but when I was two we moved to Como West in the Sutherland Shire, next door to my grandmother’s home. My mother worked as a secretary in Sydney, and later for the Sutherland Shire Clerk, then in London at a private school where Prince Charles was a student.

My father was a “jack of all trades”. He went through the depression catching rabbits, working on various properties as a stockman, learning the trade of a butcher – doing anything to keep alive. He had inherited a natural robust voice from his soprano mother. He was not, however, given the opportunity to learn the piano – only the girls in the family received this privilege. He became self-taught and often played Chopin’s Polonaise superbly by ear. He had a natural talent and a wonderful tenor voice, with which he wooed my mother at a party where he was singing. She later became his accompanist. My mother achieved honours in the Theory of music.

I was thus born into a creative, musical, hard-working, working class family. People often think it would be wonderful to have this shared experience in music, but this is not always the case. My father tried to push me into singing very difficult songs and arias well beyond my young years. Eventually my mother stepped in and took me to a very highly recognised singing teacher, the late Richard Thew, who conducted the Messiah every year at the Sydney Town Hall. Richard told her “take her away and let her be a child and leave those beautiful top notes until she’s 16” when he would see me again. He also remarked that I had the ability to not only sing but to “put it over” meaning the ability to act, which could not be taught. It came naturally. I must have been so precocious because I clearly remember asking him if his piano was in tune! (Our old piano at home had never been tuned.)

I went to private singing lessons from the age of 10 and competed in many Eisteddfods. In my first Eisteddfod at the age of 10 I won first prize in a section with other girls aged up to 13 years. But I disliked Eisteddfods, often getting an ulcerated throat a couple of weeks before competing I continued taking lessons until my late 50s.

At 16, I joined a Catholic Youth Organisation group, where I met my late husband, Ian. We married 50 years ago on 15 July 1967, at the age of 22 and 23. My husband was a design mechanical engineer, and became State Manager of Brownbuilt Ltd. He died 5 years ago from mesothelioma. I still experience a lot of grief and find life very difficult at times.

When we moved to Canberra 45 years ago a visiting friend noticed I had a piano and asked “do you play?” I replied “sort of”, but I mainly used to sing. She said I should join the Philharmonic Society (Philo). Consequently, at the age of 27 I auditioned and was given my first role as Pauline in La Vie Parisienne, by Offenbach. 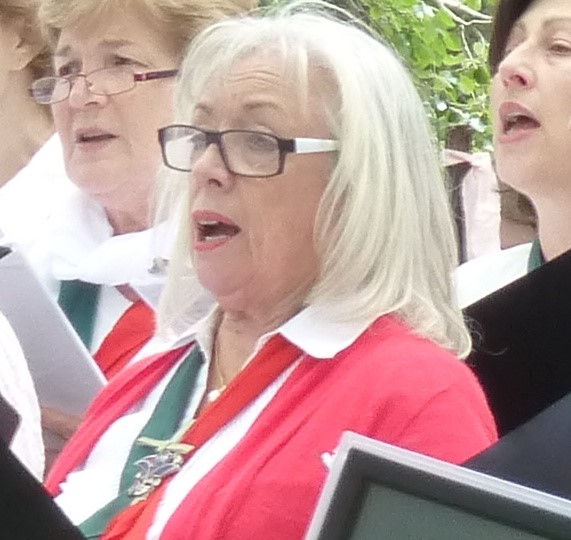 Here is our Denise during a Dante Musica Viva performance

Ian and I had two sons, Haydn and Gerard. My first son was born with many problems. He was 18 months when his deafness was diagnosed correctly, although I knew intuitively that there was something wrong from birth but I was not listened to by the medical profession. In those days mothers were considered to be overly anxious about such things.

Haydn attended Hartley Street School for the Physically Handicapped in O’Connor from the age of 18 months until four years old. He also took lessons from the teacher of the deaf at home, and I can happily say that he has grown into a fit young man, with nothing physically wrong other than being profoundly deaf. We communicate through the use of sign language, which I was one of the first parents to adopt. Prior to that my life with my son had been pure hell because of his frustrations. Our other little boy Gerard was a source of great joy, having no real problems and being born healthy. It was during this period that I worked for the International Year of Disabled Persons (IYDP) as the executive officer for over 22 committees. I learned a great deal about disability during this time.

Now, you might wonder why I have included this in my profile. It’s because my involvement in singing virtually saved my life and kept me sane!

In 1975 I auditioned for the Canberra Opera Society Inc., a fully-funded regional opera company producing three operas a year at the Canberra Theatre with the Canberra Symphony Orchestra. I performed in many productions, eg as a geisha in Madama Butterfly (when my baby was about 2 months old), Die Flerdermaus, Merry Widow, La Traviata, The Magic Flute, La Vie Parisienne, The Mikado (Peep Bo), White Horse Inn, Man of La Mancha, the Hansel and Gretel (Hansel) schools program and a wonderful production of Aida as a priestess. This was a truly exciting experience at the AIS stadium with 4000 people in the audience.

When I really thought I was over the hill, at the age of 60 I was asked to audition for the musical Titanic, produced by Supa Productions. I was chosen for the role of Mrs Strauss, with Garry Walbrook as Mr Strauss. Garry and I sang a beautiful duet, performed just before the couple was due to drown. This was a truly moving experience.

During this period and working full time in the airline industry I also managed to do many charity performances with Michael Politi and became Secretary for the ACT Singers Inc. This group performed three concerts a year ranging from musical theatre to the Beatles over a period of approx 20 years.

I commenced singing lessons here with Pat Davey, then with the late Joan Richards and the late Max Orwin. Fourteen years ago, on the recommendation of my very good friend Joan Breen, I started teaching singing from my home. This proved very enjoyable, and in retrospect I should have been teaching much earlier. After the loss of my husband I cut down on teaching, and now only have a few students.

Ian and I travelled widely. My fifth trip to Italy is coming up shortly, as well as France (where my sculptor sister lives) and other parts of Europe. However, the most exciting trip was six weeks in Bamako in West Africa, where my brother- in-law was Ambassador representing the United Nations Development Program. In Zimbabwe we went on a tented safari. We were creeping along in an open Land Rover looking for lions, which we were told were very close. I was in the front seat. Suddenly, a huge lion with a black mane jumped up from the long grass a few metres from my seat. I immediately regressed into childhood and thought I had thrown myself under the dashboard, but oh no! I came to when the driver said “Can you move, Denise, so that I can drive”: I had thrown myself into his lap and was stuck between the steering wheel and him! Another exciting holiday was to Madang in Papua New Guinea. It’s on the coast, with the most beautiful crystal-clear water.

My hobbies are gardening, music, singing, travel and taking care of my 3 lovely dogs plus 3 chickens and about 100 goldfish in my outside ponds. Last, but not least, I have four lovely grandchildren ranging in ages from 19 months to 19 years.

My life is full with many wonderful, close friends, from childhood through to this age. I am truly grateful for my singing experiences, which have kept me sane!. This includes my involvement in the Dante Musica Viva choir, which has helped me recover from the loss of my husband. The choir has given me the opportunity to do some solos at St Christopher’s cathedral (Manuka) and at St Raphael’s (Queanbeyan). My confidence has returned through these wonderful experiences.

← Europe’s future. Should we care?
Heading to Sydney →