Upon hearing my accent, people often ask me where I come from. I was born in Harbin, northern China, where my great grandparents migrated from southern Russia before the 1917 Revolution.

After 1917, Harbin became one of the places White Russians (as they were called then) fled to in order to escape the horrors of the Revolution.

Russia had built the Manchurian railway in the 1890s and Harbin became a thriving, multinational city in the 20th century. My grandfather on my father’s side worked for the railway most of his life. According to family history, by the 1930s. The Russian population in Harbin was 100,000.

The Japanese invaded China in the 1930s and treated the Chinese cruelly. They were driven out of Manchuria by the Red Army in 1945.

After 1949, when Mao Tse-tung came to power, all non-Chinese (white devils) were told to leave the country and leave all their material possessions to the Chinese people. The government had passed a decree stating that a non-Chinese family were allowed just one room and kitchen to live in. The rest of the house was to be taken over by the Chinese.

These living arrangements became almost impossible when my younger sister was born. As a six-year-old I was farmed off to live with my maternal grandparents, and later returned to the family home.

From an early age I was fascinated by language, that is, the Russian language, and loved the sound of it. I was reading Russian by the age of five and nagged my parents to take me to see a specific film, which was advertised in the local Russian paper. However, not long after the film started, I would turn my back to the screen and study the audience, which to me seemed much more entertaining.

In the 1950s Russians in China agonised over where to migrate as refugees. Europe was out of the question, as it was struggling to rebuild after the war. Many had no wish to go to Soviet Russia, which was accepting Russian refugees. My father’s dream was to go to Canada, but Canada then was not accepting unsponsored migrants. My parents did not want to go to the United States, so the only two possibilities were Brazil and Australia. Australia seemed too remote, so Brazil was chosen as our destination.

It was not easy to get a visa to leave China. Prospective refugees had to wait in a queue in sub-zero temperatures in the winter to have their applications approved. When a Soviet immigration official asked my father why he did not want to go back to Russia, Father simply replied that he wanted to see the world. The application was approved. We were given US$100 for spending money during our trip. Most of it was spent on evaporated milk, which cost US 1 a can, for my one-year-old sister.

The World Congress of Churches sponsored our sea passage. The fares were to be repaid once we settled in Brazil.

My father had three older brothers, who were in their fifties and late forties, and felt that they were too old to start a new life in a completely new country with a new language, and did return to Russia with their families and my grandmother. For many years we did not have any communication with them, fearing that a letter from us might cause them retribution from the government.

We left Harbin in 1954 and travelled to Hong Kong, where we lived for about two months while waiting for our ship. We were accommodated in a hotel where rats had made their home. One morning when I got up to get dressed, I couldn’t find my dress. My mother chastised me for not putting my clothes where they belong. We soon found out that my dress had been taken by a rat when we saw a piece of it sticking out from a hole in the skirting board. The rat must have liked the ice cream that had dripped onto my dress the previous evening.

Our voyage to Brazil from Hong Kong took us to Elizabeth Town and Cape Town in South Africa. Most Russians had never seen black people before.

I was constantly seasick on the ship and had no appetite at all. The food on board wasn’t the best. The only food I could eat was oranges, bought during one of our stops. Husbands and wives were segregated, which made it hard on my mother, looking after my sister and me.

Upon our arrival in Sao Paulo, Brazil, we were put in a camp for new arrivals. During the day we explored the city and came back to the camp for dinner and bed. In fact, our “beds” were mattresses with sheets, pillows and blankets in a large hall.

Of course this was a temporary arrangement, and men were urged to find employment and a house to live in as soon as possible. My father found employment as a mechanic. We rented a house and I started grade one. On my first day of school, we were introduced to the Latin alphabet. I was astonished that in Portuguese the sound of ‘k’ could be produced by the letters c, k, and q. There was also c cedilla, but that had the sound of c.

We lived in Sao Paulo for seven years. My father did not like the climate and wanted to migrate to Canada. By 1961, my mother had a cousin and an uncle there who agreed to sponsor us as immigrants, and so in that year we flew to Montreal.

I was 14 years old and had to learn English and French at the same time. I had had a tutor in English in Brazil. This enabled me to understand some of the English, but not enough to speak it.

My high school years were spent learning the two new languages. I soon picked up English, but French presented a problem. No matter how hard I tried, I could not get a decent mark in it.

Then in year 10, I was fortunate to have a wonderful teacher of French. Suddenly I understood what French grammar and spelling was all about. In 1966, when I was in year 11 (in Quebec under the Protestant School Board, year 11 was the last year of high school) the Quebec government passed a decree that all English-speaking students must pass their written and oral French exams in order to receive a high school leaving certificate.

I passed my French and other subjects and enrolled in a business college.

In 1967 my father was killed in a road accident. The previous year he had sponsored my grandparents, to bring them to Montreal from Sao Paulo to live with us.

I had to get employment to help my mother with the household expenses. My first two jobs as a secretary were boring and unfulfilling. Then in 1969 I got the job of my dreams, working for the Department of Russian and Slavic Studies at McGill University, where I used my Russian, English and French. Here I met Kevin Windle, my future husband. 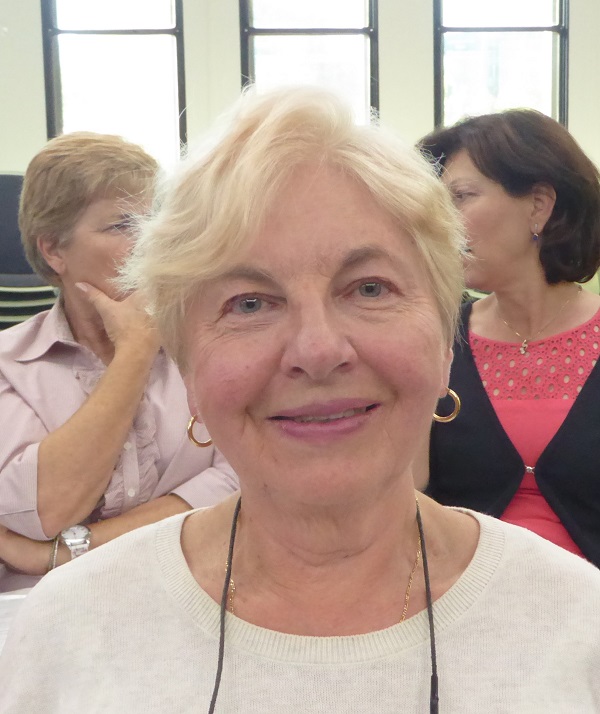 Ludmilla during a rehearsal in March

In the evenings I studied at the Concordia University, where I took Russian Literature, French and Spanish.

In 1974 Kevin and I were married and left for Brisbane a week later, where Kevin was appointed a Lecturer in Russian. We lived in Brisbane for six years and our daughter was born there. We left Australia in 1981 for Reading, in England, where Kevin worked for the BBC Monitoring Service, but returned in 1987, now with two children, to Canberra. Kevin spent the rest of his working life at ANU; I took a job at the Canadian High Commission, where I could use my French, which I enjoyed.

We have been here ever since and my migrating days are over. We love Canberra. Our two children are adults now and we have three wonderful grandchildren.

My greatest regret is that I did not complete my university studies.

I have always liked singing. In fact I was singing before I could talk properly! With no musical training, I joined the Glee Club in my school, sang in the church choir in Montreal, and after I retired joined a choir in Tuggeranong.

I went to one of Dante Musica Viva’s end-of-year concerts, and liked it so much that I decided to join the choir. That was five years ago. Having no knowledge of Italian, I thought it would be a good idea to take some language courses with Dante. Knowing Portuguese, French and Spanish, I was curious about other Romance languages, and was keen to learn Italian. I completed Beginner’s, Intermediate and Advanced courses in Italian and can now understand and speak it a little. It is a beautiful language.

On Thursday evenings I sing with the choir, which makes my heart sing. After the choir practice, I attend Italian conversation classes with Pauline Adams, who is a wonderful teacher. Again, I enjoy the challenge of translating and trying to speak Italian. It is definitely good exercise for my ageing brain.

I attend exercise classes four times a week, go on long walks, volunteer at my church and am a member of a knitting group. We knit hats, blankets, baby clothes, etc and donate them to various charities. I really like knitting, but am very slow at it. I also like reading good literature.