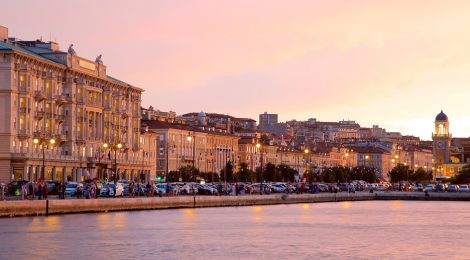 After thoroughly enjoying a wonderful performance by the Dante Musica Viva Choir held at the Italian Cultural Centre some 3 years ago, I decided I would join the choir after much persuasion from a close friend. Initially I was a little hesitant as I did not have any previous singing experience. However, as I always wanted to join a choir, I capitulated. I have not looked back since!

Now, I not only do I look forward to singing the traditional Italian songs every week, which never fail to take me back in time to my childhood days, I also delight in catching up with the individuals that comprise the Choir. I was surprised to learn that many of the members come from different parts of the globe and do not speak Italian. I am continuously amazed at the level of commitment, determination and perseverance these members display in order to be able to sing in a foreign language. In addition, as all members of the choir are all consistently respectful, friendly, helpful, enthusiastic and supportive, I enjoy their company immensely and today I consider most my friends. In addition, I am eternally grateful for their never ending understanding, patience and assistance as I endeavour to improve the quality of my singing. Prior to joining the Choir, I did not realise just how difficult it was to sing in tune or hit the right notes. At times, singing in unison can also prove to be a real challenge. However, I believe that even though the choir may not always be pitch or note perfect, it is always on key when it comes to its willingness to have a go and to do its best!

My love of singing began during my childhood as it was at this time I was being influenced by the passion my parents shared for singing (as my parents were Italian, I do not believe this to be an unusual phenomenon). This passion continued even after my parents and I settled in Australia.

Prior to migrating to Australia my parents and I lived in Trieste, a city situated to the North of Italy overlooking the Adriatic Sea. Whilst my mother and I were born in Trieste, my father was born in Cerignola, provincia di Foggia, Italy. As my grandfather was posted to Trieste for military purposes, the whole family relocated to the city. My father was 6 years of age at that time.

Sometime, subsequent to the end of World War II, my mother and father met at a local dance. They immediately fell in love and later married. Several years later, and after I was born, my parents made the decision to leave Italy and migrate to Australia. In the past, I was slightly perplexed with respect to why my mother and father decided to make such a courageous decision to leave their country of birth. I knew the decision was not one based on necessity as my grandparents were well off and my father was employed and providing adequately for the family.

Over the years, I came to realise that, whilst there were several reasons for the move, the post-World War II situation in Trieste was the most significant factor. Whilst the remainder of Italy was celebrating the end of the War, the aftermath of war proved to be a very difficult and uncertain time in Trieste because of a dispute between Italy and Yugoslavia regarding the border. I understand that in 1947, the Trieste United States Troops (TRUST) was established and a Peace Treaty was signed between the two countries which resulted in the Free Territory of Trieste becoming an independent state. Troops were stationed in the area along the Morgan Line which served to divide Trieste into Zone A (the Italian part) and Zone B, which included most of the Istrian peninsula and which was previously part of Italy but  was being handed over to Tito’s Yugoslavia. As a result, many Italians from Zone B fled into Trieste forced to leave everything behind. These events were a constant reminder of the war and added to the uncertainty felt by many. This was exacerbated by the fact that between 1947 and 1954 the situation in Trieste was not improving. American fighting ships remained visible in the harbour, tanks and air observation units were also present. In1952, the 351st Infantry Regiment was established in the city. It had at its disposal a Heavy Mortar company; a Service company; infantry battalions including three rifle companies and a heavy weapon company. The Military Police were ever present as well. TRUST troops did not leave until late 1954. As this phenomenon was unique to Trieste post World War II, not only did it serve to impact negatively on the psyche of many Triestini and its refugees, but it also led to a strong sense of betrayal. The impact was so severe that, subsequent to 1954, Triestini were the only immigrants from an urban area in Italy to have mass migrated. They migrated in whole family units despite the fact that many possessed trade qualifications. I am sure this negative experience also influenced my parents.

In addition, there were two other reasons that convinced my parents to leave Italy. The first relates to the apparent high cost of living at the time. For example, the cost of a banana, which my mother insisted on buying for me on a weekly basis, was the equivalent of one day’s pay of my father’s wages. The second reason relates to the fact that, at the time, my family as well as my paternal grandparents lived on an army base adjacent to San Giusto in Trieste. As a result, I was apparently being spoilt by both my grandparents as well as the soldiers who were continuously giving me lollies and the occasional sip of wine at the table when my mother was not looking. I understand that my mother was far from impressed and felt desperate to get away from the situation.

In light of the above, it is hardly surprising that my parents were enticed to leave Italy and migrate to Australia. Apparently, the advertisements produced by the Australian Government portrayed Australia as a wonderful place in which to live, full of opportunities, with grand homes overlooking beautiful beaches (a strong selling point for anyone coming from a beautiful harbour city). And so the family set off full of high hopes and somewhat unrealistic expectations.

On arriving in Australia the family first stayed at Bonegilla (a camp set up for migrants where living conditions were far from ideal). Life proved very difficult at first. We had no home, no possessions (other than some clothing), and a little money my father had earned prior to arriving. We suffered from a cultural shock, everything seemed alien to us: the food was different; we could not speak the language; there was no opera or cafés. In addition, there was no government housing (in particular no house overlooking the beach!); there was no rent assistance; no medical cover and certainly no English classes for migrants (my father learned English on the job and I taught my mother each day after school). However, despite the hardships we encountered, my parents were determined to succeed and, as a result of their dedication and hard work, they did. My father held down two jobs, whilst my mother did everything she could to help. As a result, things started to look up. Within a year my parents bought our first home in Queanbeyan (it was tiny but I did not mind). Several months later my father proudly brought home a little red car (it was a bomb but we loved it). Not many people owned a car in those days. I remember feeling such excitement and joy on hearing my father honking the horn from the top of the street. He had surprised me with it.

Then, unexpectedly, things got even better as several Italian families moved into the street and the endless dinner parties began during which we shared Italian food and wine. We also shared jokes, laughed a lot and sang all the traditional songs. Soon after my sister Linda was born. I thought I was in heaven! Slowly we adapted to our new life. Two years later the family moved to Canberra where my little brother Dario was born. The family had finally settled.

My siblings and I pursued a normal life. We all finished school, married and had children. Later, I attended the ANU. I graduated with a Bachelor of Arts, Bachelor of Law and then I undertook a Diploma of Law. On completion of my studies, I found employment as a judges associate and then as a lawyer. I enjoyed working in my profession.