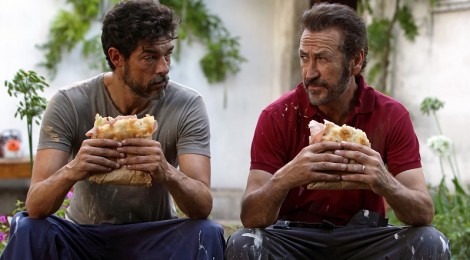 The Lavazza Italian Film Festival presented by Palace is thrilled to announce its full 2015 festival program of 32 titles offering audiences the chance to experience the elegance, beauty and boldness that is Italian cinema. The program will feature an exciting line up of brand new comedies, gripping dramas, romantic tales, crime thrillers, engaging documentaries and also ventures into experimental and fantasy cinema all as part of the festival’s 16th edition.

The festival will kick off with the award winning box office smash hit, GOD WILLING (Se Dio vuole), a laugh out loud comedy starring the gorgeous Alessandro Gassman, Marco Giallini and Laura Morante which tells the story of an atheist surgeon with a God-complex, a charismatic priest, a dysfunctional family and an announcement that takes everyone by surprise!

The 36 day festival will close with a new restoration of the Academy Award nominated THE CONFORMIST (Il conformista), which will see the return to the big screen of acclaimed director Bernardo Bertolucci’s visually intoxicating art deco style adaptation of Alberto Moravia’s novel about an upper-class follower of Mussolini.

Taking out the Best Actor award at the Italian Golden Globes for Luca Zingaretti, the gripping crime thriller PEREZ depicts an urban wasteland, hiding the underbelly of organised crime through the filtered lens of the justice systems. Also delving into the criminal world is BLACK SOULS (Anime nere), an elegant, seething and expertly-directed, award-winning thriller by Francesco Munzi which is a timeless and powerful tale about the challenges of breaking cycles of crime and violence.

This year will see a string of Italian comedies light up the screen with highlight titles including LATIN LOVER, a charming and amusing new offering from acclaimed writer/director Cristina Comencini which tells the story of the life and secrets of the great Italian star Saverio Crispo, a “Latin Lover” played seductively by Francesco Scianna. Winner of the Best Comedy at the Italian Golden Globes in 2015, THE LEGENDARY GIULIA (Noi e la Giulia) by Roman actor/director Edoardo Leo brings a fantastic cast together to tell the story of three down-on-their-luck men who meet by chance and decide to combine forces and risk everything to start a Bed and Breakfast. Warm-hearted, comedic gem DO YOU SEE ME? (Scusate se esisto!) stars Paola Cortellesi and Raoul Bova and delivers laugh-out-loud moments to celebrate the importance of individual value and being true to oneself. Finally, MIA MADRE is the lively and brilliantly absurd comic clash from veteran director Nanni Moretti featuring John Turturro and an award winning performance from Margherita Buy as an unhinged filmmaker dealing with a personal crisis.

Other films set to deliver laughs are UNIQUE BROTHERS (Fratelli unici), a delightful comedy about family and second chances starring handsome duo Raoul Bova as a man suffering memory loss, and Luca Argentero as his irresponsible younger brother; A FAIRYTALE WEDDING (Un matrimonio da favola), a whirlwind of comedic misunderstandings arise when four high school friends reconnect years later at a lavish wedding; PIZZA AND DATES (Pizza e datteri), shot entirely within the canals of Venice this playful comedy focuses on cultural exchanges and integration as a community of Muslims search for a new location for their mosque; SOAP OPERA, in which the kooky tenants of an apartment block experience a sudden and shocking situation when they let their private lives, past secrets and crazy passions intervene; and SO FAR SO GOOD (Fino a qui tutto bene), a touching comedy that that brings together five fantastic young actors who play university graduates facing important life choices.

Films that will add further excitement into the mix delving into experimental, fantasy and documentary cinema include ITALY IN A DAY (Un giorno da italiani), Oscar-winning director Gabriele Salvatores experiment portrays Italy though the eyes of Italians exposing the hopes and fears through a collage of 632 videos sent from all over Italy in a touching mosaic of life in Italy; director Matteo Garrone’s English language debut TALES OF TALES (Il racconto dei racconti), featuring an all star cast of Salma Hayek, Toby Jones, Vincent Cassel, John C. Riley, Shirley Henderson and Hayley Carmichael. Not for the faint hearted,the film delves into the depths of the human psyches in a delicious dream-like visual feast brimming with imagination and mischief; and Italy’s industrial miracles of the twentieth century are explored in Davide Ferrario’s insightful documentary THE DEVIL’S SOUP (La zuppa del demonio ), through an impressive range of 100 years of archival footage.

Romantic tales are sure to delight at this year’s festival, with a selection including WONDROUS BOCCACCIO (Maraviglioso Boccaccio) where love triumphs over death in veteran filmmakers Paolo and Vittorio Taviani’s reinterpretation of Giovanni Boccaccio’s classic The Decameron; WHAT A BEAUTIFUL SURPRISE (Ma che bella sorpresa), a classic romantic comedy of errors from the master Alessandro Genovese, about a jilted hopeless romantic who is surprised when he is given a second chance for love; and A WOMAN AS A FRIEND (Una donna per amica), an hilarious romcom from Giovanni Veronesi, the director of box office sensation MANUAL OF LOVE, starring French model/actress Laetitia Casta and Fabio De Luigi.

Coming-of-age is explored in CHLORINE (Cloro) the assured debut feature from director Lamberto Sanfelice; SHORT SKIN, a surprising pleasure and profound drama that perfectly interweaves family drama and cheeky comedy; and ITALO, a charming tale for all ages that depicts the life-altering friendship between an extraordinary dog and a lonely child.

Other titles that form part of this year’s festival line up include the powerful GREENERY WILL BLOOM AGAIN (Torneranno i prati), made with devastating simplicity and painful realism, auteur Ermanno Olmi demonstrates he is among Italy’s most masterful and humanistic directors as he evokes the terrors of war in a short but stunningly effective hypnotising film capturing a single snowy night on World War I’s Italian front; PARTLY CLOUDY WITH SUNNY SPELLS (Tempo instabile con probabili schiarite), a warm-hearted comedy with a conscience about generation clashes, new horizons and an oil discovery in a small town starring Luca Zingaretti, John Turturro and Pasquale Petrolo; and MAFIA & RED TOMATOES (La nostra terra), based on the real-life work of the Libera association, this recent box-office hit tackles the issue of mafia power over communities with redemptive joy and a smile; and the already announced Australian Premiere of the Venice multi award winning THE DINNER (I nostri ragazzi), which follows the moral struggle facing two wealthy brothers and their wives in this gripping adaptation on the Dutch best-seller by Herman Koch.

You can also delve into a couple of fascinating biopics this year – ORIANA (L’Oriana) from Italian Golden Globe-winning director Marco Turco, about the life of Italian journalist and writer Oriana Fallaci who gave up everything in pursuit of her career; and LEOPARDI (Il giovane favoloso), an applauded and engrossing historical drama about the talent and struggle of Italy’s greatest 19th-century poet Giacomo Leopardi, a radical thinker and philosopher who produced inspiring works and intelligent prose that have influenced countless others, played by Elio Germano (Best Actor, Cannes Film Festival 2010).

Dramatic features include MONTEDORO: after the death of her adoptive parents, an American women journeys to Montedoro, a remote Italian town in southern Italy, hoping to discover her true origins in this haunting and poetic film; ANOTHER SOUTH (Una storia sbagliata): in this brave drama starring Isabella Ragonese (La Nostra Vita) director Gianluca Maria Tavarelli transports us to the Iraqi combat zone following a young Sicilian women through a complex tapestry of flashbacks as she searches for answers; and LAND OF SAINTS (La terra dei santi) offers powerful insight into the often unacknowledged females participating in the male-dominated tug-of-war between mafia rings and the law.

And if you’re seeking the ultimate Italian espresso, whilst indulging in some ‘cinema Italiano’, look no further than Lavazza, whom the Festival is once again honored to have as the naming rights partner. Lavazza is proudly served at all Palace Cinemas so attendees year-round can enjoy the premium taste of Barista coffee.

Tickets are now on sale through www.italianfilmfestival.com.au