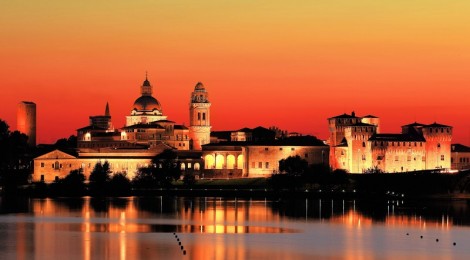 Mantova: a night to remember

At 8pm the night was pleasantly warm, almost hot: ideal weather to enjoy a special meal “fuori”. In June 2006 I was in Mantova, in Lombadia, northern Italy, for their inaugural “La Cena del Ponte”, long table, Italian style.

The original bridge, the Ponte di San Giorgio, dates from 1198, but in a disastrous state around 1400 it was rebuilt by Ludovico Gonzaga – from the famous Mantovian family – and over the years many improvements were made (including the necessary rebuilding after WWII) until now it is restored and reconstructured so that there is a cycling path and a walking track at a lower level than the main bridge road that crosses two of the town’s lakes.

The evening event was promotion of the city and province through shared enjoyment of their traditional wine and food, so all food comprised typical products of the local area. Nineteen restaurants participated, each hosting a long table of guests. Tickets were scarce: at Euro 50 per person there were only two restaurants with available tickets on the day prior to the dinner. Our little group sat with locals from the Al Portichetto: we were made very welcome: handshakes, double cheek kisses “benvenuti”.

Interesting breads were on the table when we arrived: one type, similar to grissini, called il bauletto mantovo, and the second, schiacciatina mantovana, a thinner schiacciata to that of the Tuscan (Pisan) area.

Antipasti were a generous serve of salame mantovano – produced from suino pesante (pork) – with delicious melone (cantaloupe) of characteristic scent and taste from Terra di Virgilio (remember Dante’s guide?). The following weekend in fact was to be the Sagra del Melone in a nearby town, so clearly it was peak season for melons.

Each ristorante had a tent set up opposite its long table where their customers/guests were seated. Gas stoves and strong tables for cooking and preparing the meals were open to view. At one stage there was concern within the ranks when the wind blew up and the gas fires continually blew out. It was fascinating to watch the communal cooking, including the making of the polenta using the very long wooden spoons and huge saucepans.

The primo piatto was to die for: tortelli di zucca –pasta filled with pumpkin mixed with amaretti, mustard, nutmeg and lemon, and served with grated cheese. For the secondo we had stracotto mantovano con polenta. The polenta was served warm and beautifully soft with a slice of stracotto on top: unfortunately my mind took over the matter when I discovered half way through eating this course that the meat used in making stracotto can be beef, donkey or horse. (I had a similar reaction previously in Padova, where horse is a traditional meat. If I can eat cow and kangaroo, I should be able to enjoy horse too, I suppose. Or become a vegetarian.)

Following the primo, a plate of local cheeses was served to each person – Il Grana Padano produced on the left side of the Po River, and Pamigiano Reggiano produced from the right of the Po – with mostarda mantovana, a local specialty I could come to enjoy – fruit soaked in a mustard sauce so that it has an unusual sweet and sour taste.

Wines served were vini mantovani DOC and IGT, and included wines from two completely different territories of the province. From the Pianura Padana, Lambrusco, a particular traditional (cultivated in these parts since the Etruscans) wine, slightly sparkling, fairly dry and fruity, nothing like the sickly sweet “lambrusco” we drank 20 years ago in Australia.

Although the main part of the bridge was closed during the dinner to all except the guests and those working to prepare and serve the food and wine, there was a steady stream of locals along the lower level who were continuing their passeggiata in the warm summer evening, and many families riding bikes. Our chats at the table were interspersed with “Ciao Bella!”, “Ciao Maurizio!”, “Ciao Renata!” as the paying customers and the parading locals called out to greet each other.

There also seemed to be some (mainly courteous) competition between the ristoranti. Giorgio, the guest sitting opposite me, from a suburb of Mantova, spent some time visiting chefs and friends at other tables. Although the menu was supposedly the same at all tables, at one stage he brought back a pastry bowl full of fried salvia (sage) leaves from the opposition – delicious!

Quite suddenly loud music was heard. A long display of fuochi d’artificio with musical accompaniment – a mix of modern music and opera classics, including Nessun Dorma (of course!), followed. Not usually one to admire fireworks I was a little surprised at my reaction. A more spectacular presentation I have never seen nor heard – no doubt influenced by our proximity to the spot on the lake where they were let off, and the clever way in which the fireworks and music were synchronized.

Dolci were served following the fireworks and comprised slices of three different cakes. One, of course named La Torta Mantovana, included pine nuts and almonds, the second, L’Helvetica, also included almonds, on a base of pasta with meringue, zabaione, and cioccolato, and the third, La Sbrisolona, a dry cake, made from flour, sugar, almonds and butter. Perhaps we had all eaten too much, or maybe tastes have changed over the years, but I did notice there were quite a lot of the dolci left untouched.

Speeches from VIPs were predictable but kept to a minimum. The term “slow food” was not used, but clearly this meal of seasonal, traditional food with local wines enjoyed in good company mirrored the Slow Food movement’s philosophy. Ecoculture was a term I heard used more than once during the evening.

At midnight as we walked back across the bridge past 12 of the 19 long tables, several small groups of guests were continuing to chat and drink. There was a short queue at the caffè tent for those seeking their last caffeine fix for the night. Romantic music was playing softly: I expected some of the couples to start dancing.

What made the evening so memorable? A combination of many things…. The setting: a beautiful old bridge cut off from the traffic, a spectacular sunset on one horizon and a then a short time later, a red moon on the opposite horizon, a castle and fortress at the town end of the bridge lit up like a story book photo, two lakes glittering in the moonlight, tables set with crisp damask tablecloths and candles down the centre, good cutlery and glasses, hundreds of chairs in line with matching white material covers. Interesting and beautifully presented traditional food and wine. And of course the hospitable local people.

The following day the local newspaper reported that almost 1700 diners had participated in the event. But apparently there had been great consternation and a few altercations in the city –the all-important bridge had been blocked off from midnight the previous day to allow for preparations for the dinner. The police had worked overtime diverting the traffic, the entrance to the autostrada had been blocked for some distance, and a lorry had been trapped. There’s an upside and a downside to everything! (The date for 2016’s La Cena del Ponte has not yet been finalized).