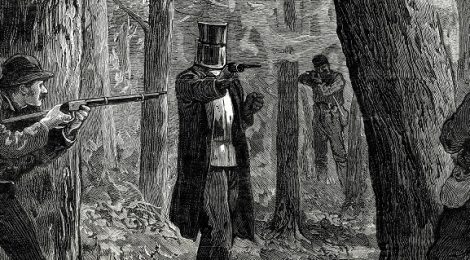 Alfonso Piazzi – soldier, winegrower and lover – has a secure place in Australian history. He is the only man (other than a police officer) ever to pull a gun on the bushranger Ned Kelly.

Piazzi was born in Italy in 1844. Little is known about Piazzi’s early years. On his death an obituary reported that Piazzi had been a soldier for Garibaldi. But no details were given on where and when he served.

In July 1865 Piazzi arrived in Melbourne on board the passenger ship Ocean Empress.

He settled in the town of Benalla in north-eastern Victoria. Piazzi became a road contractor for the Benalla Council and was also a pioneering wine grower.

Piazzi and seven of his employees were working in the township of Glenrowan. Their task was to load a consignment of quarry metal on to railway trucks for transportation to Benalla. The team would stay overnight. They pitched their tents by the railway line and close to the Glenrowan Inn. This arrangement suited both the thirsty workers and the publican, Mrs Anne Jones.

Unbeknown to Piazzi and the residents of Glenrowan, the Kelly gang arrived in town around midnight on 28 June. Kelly had decided to derail a train carrying police re-enforcements and stage a final shoot-out with the police.

Piazzi bedded down for the night. Although never married, apparently he had an eye for the ladies. There was a woman with him in the tent.

Around 1.00 am, Piazzi awoke with a start. Kelly entered the tent and ordered him to get up. Piazzi – not realizing the intruder was Kelly – reached for his gun. Kelly was furious and readied to fire his rifle at the Italian. Fortunately Piazzi was able to push the rifle butt to one side. The shot went astray. Piazzi’s lady friend let out a piercing scream.

Piazzi, realizing that further resistance was pointless, surrendered to Kelly. He spent the next ten hours as a one of the 61 hostages held by the Kelly Gang inside Mrs Jones’s hotel. It was a terrifying experience, as the police fired indiscriminately into the Glenrowan Inn. As one hostage said ‘ We were not afraid of the bushrangers but we were afraid of the police.’

Around 3.00 pm the siege was over. Ned Kelly had been captured. The three other members of his gang were killed, along with two members of the public.

Piazzi’s encounter with Ned Kelly is the only known occasion where a civilian drew a gun on Ned Kelly.

But the trauma of the siege had a damaging impact on Piazzi’s health. He died the following year and now rests among the gum trees at the Benalla cemetery.

Who was Piazzi’s lady friend? We will never know. It is a secret that Piazzi took to the grave.

Acknowledgements:
– Judy Douthie, I was at the Kelly Gang Round Up, Network Creative Services 2007.
– Ian W Shaw, Glenrowan – The Siege that Shaped a Nation, Macmillan, 2012.

← DMV – Margaret Millard
The use of prepositions →