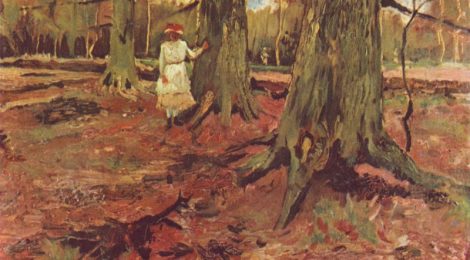 While Dante (1265-1321) is regarded as the father of the Italian language, two other figures stand out as also co-fathering it: Petrarca (1304-1374) and Boccaccio (1313-1375). The latter is best known for The Decameron, a collection of novellas written in prose, while the former was a celebrated poet and one of the first humanists.

Petrarca would be later endorsed as a model for Italian style by the Accademia della Crusca, and his sonnets were admired and imitated throughout Europe during the Renaissance, becoming a model for lyrical poetry. Here is one of his best-known sonnets – taken from the collection Il canzoniere – with the recurring themes of his poetry: search for solitude, contact with nature, and shyness about his feelings (in this case, being in love). While you read it please remember that it was written some 800 years ago yet the language is still so easily understood.

Here is the translation I found in The Penguin Book of Italian Verse:

Alone and thoughtful, I go pacing the most deserted fields with slow hesitant steps, and I am watchful so as to flee from any place where human traces mark the sand. I find no other defence that protects me from the open awareness of people; because they can see from without, in my actions bereft of joy, how I inwardly flame: so that now I believe that mountains and banks, and rivers and woods know what the tenor of my life is, which is hidden from others. And yet I cannot find any paths so harsh or wild that Love will not always come, talking with me the while, and I with him.