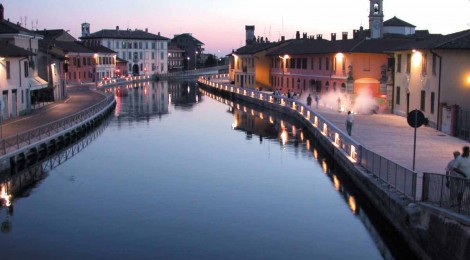 The great 20th century poet and classicist Salvatore Quasimodo was born in Modica (Sicily) on 20 August 1901 and died in Naples on 14 June 1968. He first graduated from the local technical college then moved to Rome with the intention of completing an engineering degree. For economic reasons, however, he was forced to work but still pursued Latin and Greek studies. From Rome he moved to Florence where he met other poets including Montale. Over the years he moved again and again for work reasons – to Reggio Calabria, Imperia, Genoa and finally Milan, all the while continuing to write and publish his poetry and also translating Greek and Latin writings. His increasing moral and social engagement is clear in his more recent poetry. In 1959 he was awarded the Nobel prize for literature. He was also awarded two honorary doctorates – by the University of Messina and by Oxford University.

In another part of this Review I mention the bombing of Milan in August 1943 by the Allied air forces, which caused significant damage to the city. Quasimodo was living in Milan at the time and wrote this touching poem.

This is a translation by Canberra poet Geoff Page and Loredana Nardi-Ford in Day after day – Selected Quasimodo Poems.

Sad hand, in vain you search the dust.
Milan is dead.
It’s dead: the final roar
was heard in the heart of the Naviglio. And the nightingale
fell from the spire on the convent
where it sang before twilight.
Don’t bother to sink new wells in the courtyards:
the living are no longer thirsty.
Don’t touch the dead, so red, so bloated:
leave them there in the soil of their homes:
the city is dead; it is dead.