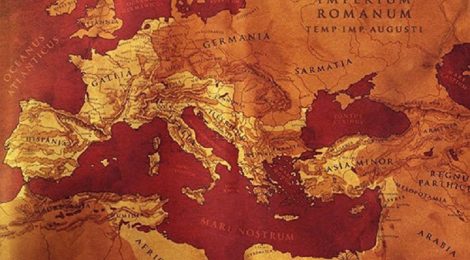 Rise and fall of a super-power

The guest speaker at our cultural event on 29 September 2016 was Michael Alder. Having been fascinated by the civilisation of ancient Rome since he was a child, Michael studied ancient history at ANU, and now gives courses for the University of the Third Age on the Roman Republic and on Imperial Rome.

His thorough knowledge of the subject allowed him to perform the remarkable feat of covering 1300 years of history in an hour, in his presentation: The Rise and Fall of a Superpower – A Very Brief History of Ancient Rome and its Empire 753BC to 565AD.

Michael began by reminding us of the many traces left by the ancient Romans that are still with us today, such as amphitheatres and aqueducts in many countries, Latin which is the basis of many modern languages including Italian, Latin script which we use in English, and the calendar. All of this began with a small, insignificant village on the Tiber, which within a few centuries rose to rule an empire covering a vast territory and containing a quarter of the world’s population. It is the only civilisation ever to have ruled the whole of the area around the Mediterranean Sea.

The ancient Romans believed that they were descended from gods, demi-gods and heroes – notably Aeneas of Troy, and later Romulus and Remus, the twins suckled by a she-wolf. According to the legend, Romulus killed his brother and founded a city called Rome on the seven hills in 753BC. (Michael told us that Romulus’s name was derived from the name Rome; Rome was not named after him.)

The reality was more mundane. The original Romans were pastoralists who retreated at night to small hilltop villages. The Etruscans built the villages of Rome into a city State and drained the swamps, building the Cloaca Maxima which can still be seen in Rome today.

Rome was ruled by kings until 509BC, when Tarquin the Proud was driven out by a popular uprising and the Roman Republic was established. The republic was founded on the idea of “libertas” and rule by the many (“res publica”). The initials SPQR (“the Senate and the people of Rome”), which are still in use in modern Rome, date from this period. Although all male citizens could vote in assemblies, the reality was that control was in the hands of aristocratic families. Interestingly, Michael told us that most of Rome’s territorial conquests were achieved while Rome was a republic, not by the Roman Empire.

The reason for Rome’s military success, he suggested, was not that Romans were more militaristic than their neighbours, but that they were better at it. Rome was sacked by Gallic tribes in 390BC, but after that it remained unconquered for 800 years. One key to its success was the policy of allowing defeated peoples to become Roman citizens, on condition that they provided soldiers for the Roman army. During the “classical” or “high” republic (270BC -150BC), Rome did not have a professional army, but only an army raised by levies of citizen soldiers. During this period, the Roman Republic fought, and ultimately won, wars against its great rivals, Carthage and the Hellenistic Kingdoms (the successors to Alexander the Great).

By 133BC, the Roman Republic had conquered a huge territory, which its form of government was not adequate to manage. Competing camps within Rome turned on each other. Nonetheless, territorial expansion, especially by rivals Julius Caesar and Pompey the Great, continued. In 49BC, Julius Caesar crossed the Rubicon and triggered a civil war, at the end of which he was the ruler of the Roman world. Although Julius was assassinated in 44BC, there was no return to a republic. Julius’s great-nephew, Octavius, having defeated the alliance of Mark Antony and Cleopatra, established an effective form of government while keeping control himself. Octavius – who became known as Augustus – was the first Roman emperor (27BC – 14AD), though he did not use that title himself. He called himself the “first citizen”.

Essentially, Michael told us, the territorial boundaries under Augustus were those that lasted for the whole of the empire, though the greatest extent of territory was achieved under Trajan (98-117AD). There were great building projects under emperors such as Nero (54-68AD), Domitian (81-96AD), Hadrian (117-138AD) and Septimus Severus (193-211AD). However, by 180AD, the “glory years” of the Roman Empire were already coming to an end. Plague had been brought back to Rome by the armies and there were new and dangerous enemies. The aristocracy was in decline. It was the army that chose who would become emperor. During the third century, Rome collapsed into civil war.

Its fortunes were revived by three emperors of military genius. Aurelian (270-275AD), “Restorer of the World”, reconquered territory and built defensive walls around Rome itself. Diocletian (284-305AD) overhauled the system of government. In 290AD, he set up the Tetrarchy, consisting of two emperors – eastern and western – and two junior emperors. Most unusually, Diocletian did not die in office and was not deposed. He retired to his grand palace in Split, Croatia. Civil war broke out again. Constantine I emerged victorious and reigned from 312 to 337AD. As well as legalising Christianity, which subsequently became the sole legal religion of the Empire, he established a new capital in the east – Constantinople.

During the third and fourth centuries Germanic tribes migrated into areas around the empire. In the fifth century, they moved into the territory of the empire itself. Rome was captured and sacked by the Visigoth king, Alaric, in 410AD. The loss of territory meant a loss of tax revenue and the western empire was unable to pay its army. In 476AD the last of the western emperors, Romulus Augustus (475-476AD), was deposed. Michael pointed out the irony of the last Roman emperor having the names of the legendary founder of Rome (Romulus) and the first emperor (Augustus).

This is traditionally regarded as the end of the Roman Empire, although the eastern empire continued until Constantinople was eventually captured by the Ottoman Turks in 1453. In fact, under the eastern emperor Justinian (525-565AD), the famous general Belisarius set out to reconquer much of the lost territory of the western empire. He succeeded in recapturing territory, including Italy and Rome, but they were soon lost again. Both Belisarius and Justinian died in 565AD.

Many of us in the audience were surprised to learn that of the 85 Roman emperors, only 9 were born in Rome itself. The others came from all corners of the vast empire. Augustus, the first emperor, also had the longest reign – 41 years. Many of his successors had very short reigns indeed and 75% of them died violent deaths.