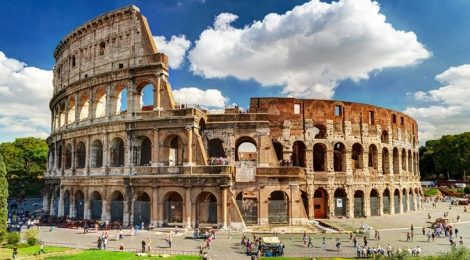 My annual summer holiday in my native land of Friuli is something that re-energises and elates me but also enables me to maintain the strong connection I feel with my traditions, culture and heritage. I really enjoy observing life in Italy in all its facets. I read at least one newspaper every day and enjoy debating topical issues with my friends and family. Here is a summary of the main topics that struck me during my sojourn.

The 24 August earthquake in central Italy
Nearly 300 people died and some 4400 had to leave the devastated area. Apart from the human tragedy, buildings dating back to the 12th and 13th century were reduced to rubble. Also collapsed were old houses and even newer buildings supposedly built to withstand earthquakes, like a school at Amatrice inaugurated in 2012. Loud and clear was the wish to ensure organised crime does not play a role in the reconstruction. Fund-raising initiatives sprang up everywhere in solidarity with the people affected, and volunteers flocked to assist. I can proudly say that my region of Friuli contributed to the national effort by building a bridge in just eight days. Dubbed ‘Ponte della rinascita’ (rebirth bridge), it replaced the damaged Tre Occhi bridge.

Refugees/Migrants
This continued to be the topic that led most news bulletins because of the incessant and unstoppable arrival of boats from across the Mediterranean. Between 1 January and the end of July, over 88,500 people arrived in Italy by sea, including Syrian refugees. In the first six months of the year at least 2920 people had died at sea. By any measure it was an immense tragedy: compassion-fatigued Europe struggled to cope with the flood of human misery, often leaving new arrivals to their own devices and sometimes stuck at closed borders. In Italy the high cost of providing temporary accommodation to those arriving at our shores was bemoaned by a segment of the population which itself was struggling because of the weak economy.

Politics
Prime Minister Matteo Renzi continued to lose popularity due to the lack of real progress made since his promising mandate began. Oddly enough, he was intent on pursuing senate reform instead of putting his energy into more substantial matters. Lack of real progress may be partly due to lack of internal support as well as an obstructionist opposition which includes the powerful Movimento 5 Stelle (M5S). This Movement (unwilling to do deals and to compromise) had emerged a few years ago as a form of protest against traditional political parties but by 2016 it had gained about 25% of the national vote.

The economy
Official statistics show that public debt is still at record levels (partly due to an inability to cut wasteful expenditure) and that economic activity is still stagnating, with exports being a particular problem. High unemployment rates motivate young people to emigrate. Despite the official gloomy statistics, the economy (some of it black) does chug along: people still seem to enjoy themselves; restaurants, beaches and hotels are full. International tourism is holding up well. Chinese investments in Italy are on the rise. Many regions in Italy, and not only in the South, are operating at a loss but (let me rejoice!) my region of Friuli topped the rankings for operating with a budget surplus.

Society
Although same-sex marriage is now lawful, couples tying the knot are often reluctant to publicise the ceremony: this Catholic country still struggles to accept the law change and homosexuality in general. And to address lowering reproduction rates, the Government embarked on a campaign to encourage women to have children early, but it was so controversial that it was discontinued. Many women found it offensive.

Rome
Italy’s capital attracted a fair bit of attention over the summer: firstly, because of a garbage collection strike that left roads littered and smelly; secondly, because for the first time a woman mayor (who happened to be not only attractive but also to belong to the M5S) had been elected at a time when the city was immersed in serious budgetary problems and probity issues that she needed to address.

Australia in the news
I kept an eye out for any mention of Australia in the news. We did get a bit of attention: for our uncompromising policy of ‘pushing back the boats’, policy that many argued should be emulated in Italy; for Linda Burney’s maiden speech in September – it was underlined that she was the first Indigenous woman elected to the House; and for the murder in Qld of an English tourist by a French tourist shouting Allah Akbar. There was also a surprising familiarity with the TV series Border Security that shows how strict our customs staff are at airports.

On the personal side, the highlights for this year were the opera Turandot at the Arena di Verona; a medieval dinner for 400 diners at a long table set up along the medieval ‘corso’ of Spilimbergo, with medieval entertainers passing by all evening; and a visit to the Montasio Malga in the Julian Alps. Fat cows graze happily on the plain and delicious Montasio cheese is made from their milk. Freshly made gnocchi at the local restaurant were pure bliss!

← Poetry corner – Diego Valeri
Rise and fall of a super-power →