On Harmony Day, Sunday 21 March, the Dante Alighieri Society of Canberra joined other members of the Canberra Multicultural Community Forum in Lennox Gardens Yarralumla for the unveiling of the 100th peace pole in Australia by the Governor General of Australia.  Despite the inclement weather, the ceremony was well attended by multicultural community and diplomatic representatives. Our Society was represented by the President, Franco Papandrea and the two Vice-Presidents, Alessandro Merola and Cathy Perre.

The peace pole is located in 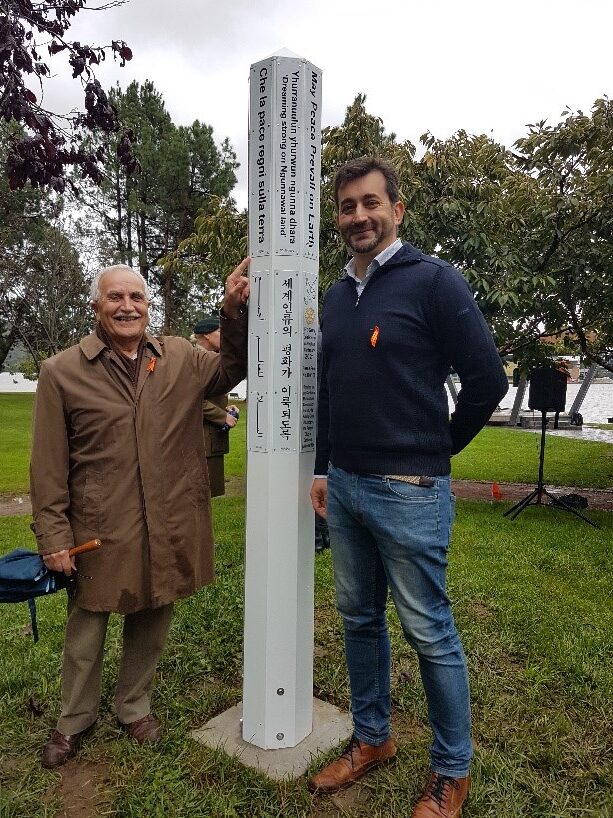 Canberra’s Nara Peace Park opposite the Rotary World Peace Bell, itself inaugurated on Harmony day 2018.  Both the bell and pole are symbols promoting peace in the world that have been erected in many countries.  The peace pole displays the plea “may peace prevail on earth” in 15 national languages including the Italian version “che la pace regni sulla terra.”  The unveiling ceremony included the reading of the plea in the various languages by national diplomatic representative concurrently with the ringing of the world peace bell by local community representatives. In the absence of an official diplomatic representative, Franco Papandrea was invited to read the plea in Italian and the peace bell was rung by Alessandro Merola and Cathy Perre.

In his speech, the Governor General paid tribute to Australia’s strength as a multicultural nation in these words:  “Australia is one of the most multicultural societies on Earth, comprising people from every corner of the globe – people from different backgrounds and cultures; people who have different life experiences.  Yet we are one nation, and we are all Australians. Our diversity is one of our greatest strengths.”

He also reminded those present that the Order of Australia is our nation’s pre-eminent system for recognition of achievement and service to the community. He stressed that there were many “ordinary Australians deserving of recognition who do outstanding work in the community” and who “don’t put their hand up for recognition” and he urged those present to help him identify them: “I need you to nominate them so that we, as a nation, can say well done and thank you.”

The Dante Alighieri Society of Canberra is proud to have been part of the peace pole unveiling ceremony and applauds Rotary and the Canberra Multicultural Community Forum for this important initiative.