Luigi Capuana (1839-1915) was a Sicilian writer known for his leadership of the “Verismo” literary movement of the late 19th century; and for his children’s stories. “Il Drago”, which might in English be rendered “The Old Dragon”, is a short story which combines both. It is a story written for children that focusses on two semi-orphan children, who are taken in by an embittered old man.

The story is set in rural Sicily of the late-nineteenth

century. Its grounding in ordinary lives and telling through

the eyes of its protagonists marks out its “realism”. Capuana however also loved to write fairy tales, both retelling traditional fairy tales of Sicily which had recently been collected by Giuseppe Pitré and creating his own new versions and tales. Il Drago has elements of fairy tale also woven into it. Along with a “dragon”, the story has a “witch”, although she is just the heartless (but impoverished) aunt of the two orphans. 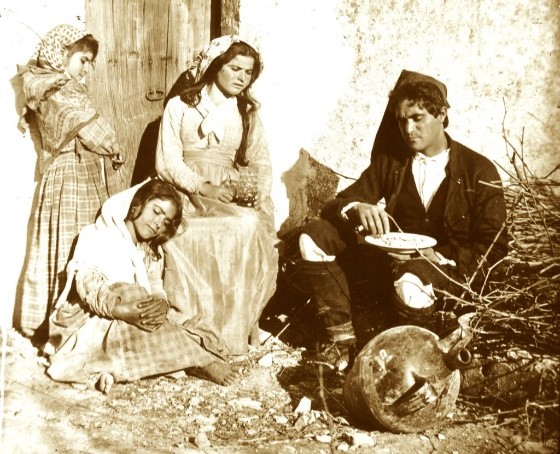 Also hidden in the story are elements of Luigi Capuana’s own life. He was from a wealthy family and had a long-lasting relationship with Giuseppina Sansone (a poor woman) that spanned 20 years. She bore him numerous children. None of them were acknowledged. All were sent to orphanages, as was a common fate of unwanted children in Italy of the era. The institution of “The Ruota” existed to allow infants to be left anonymously at an orphanage. Capuana’s story is a fairy tale which heads in the opposite direction: poor children are redeemed rather than abandoned. Below is a translation of the opening sections of Il Drago.

On the Doorstep by Giuseppe Bruno 1880s Limina, Messina

The two children, who had been playing near the little wall of the bridge where their aunt had put them to beg charity from passers-by, had quickly seated themselves on the sight of the old man arriving on his donkey. The older one sat on the little wall, and the younger on the ground; and they continued whispering to themselves.

Don Paolo Drago: dragon by name dragon by nature, the people said. As he drew in front of them, he halted his donkey with a gentle tug on the reins.

“What are you doing here?” he asked with a scowl. “Go home. And tell that witch, your aunt: ‘Don Paolo doesn’t want us begging in the streets.’ Go home.”

And as the children didn’t move, he made a growling noise that frightened them.

In fact, that morning, they did move off quietly, and at the corner of the street, they peered back, waiting until Don Paolo headed off. Then jumping up, they returned to their spot, the older sitting on the little wall, and the smaller one on the earth, her hair unkempt, barefooted and with a ragged shirt. The other, who was also barefoot, but a little better dressed, wore a blue headscarf with white polka dots about her head.

The Old Dragon, as they usually called him, lived opposite them, and in the evening when he returned from his fields, he found them outside his house and asked the older one, with his usual harsh tone:

“Where is that witch, your aunt?”

“Did you tell her that Don Paolo said that he doesn’t want us to beg in the streets?”

And he waited at his window for the old lady to return.

Ugly and sweaty, she would arrive with an empty basket on her arm. She arrived muttering quietly to herself and dragging her crooked lame leg. Don Paolo, looking down from his apartment, addressed her from his window.

“How is it that you send these orphans to beg in the streets? Aren’t you ashamed of yourself? Strega! Witch!

“You feed them,” replied the old lady. “You wouldn’t even give a person the skin off a fava bean.”

“I’m not their relative, and I have no such obligation. They’re not even boys!”

And the Witch, signalling the children to enter the house, turned her back on the Old Dragon and disappeared through her doorway.

Two days later nothing had changed.

The children sheltered one against the other, but this time, almost as a joke, the older one had stretched out her hand towards him.

The old man stopped his donkey, and spoke to the child:

“Come … Here … Now go home. Today you have something to eat.”

He handed her half a loaf of bread; the large fat kind that are made at home and which are called guasteddi in Sicily.

The child’s eyes opened wide at the wonder of it and no words of thanks escaped her lips.

“If I find you here tomorrow …” menaced the Old Dragon.

What could the children do after all? This was their aunt’s doing. The children’s eyes met silently consulting each other.

And this time in truth they did, taking their half loaf with them to their aunt.

It was incredible. The Old Dragon had given them charity. Was he dying? Their old aunt explained the matter so. But the next morning she compelled the children once more to return to their usual post to continue their begging. Until they were old enough to work, they could earn their keep so.

As soon as Don Paolo saw them, he truly became a dragon.

And as they hesitated, he added.

“Go. I’ll take you to the Witch myself.”

And he chased them on before him; the children afoot, he astride his donkey, his brows in a deep frown, muttering obscenities directed at the Witch.

The Witch, meanwhile, was to be found seated on her front step engaged in darning a sock. As soon as she saw them at the end of her street, she sprang up in a fury, and did not wait for Don Paolo to speak.

“Mind your own affairs, Old Dragon. What business is this of yours? Are they your children perhaps?”

But Don Paolo, who was as sharp tongued as she, did not let himself be cowed. Still astride his donkey, a stream of invective began to vomit from his mouth against the old woman. She had no conscience. She pushed these poor innocents to moral ruin by sending them out to beg in the streets.

A gaggle of neighbours, women and workers, had formed around them. They laughed but supported the rightness of his assault.

In the end, the Witch, who had not remained silent herself, and who had poured imprecations of all sorts back on Don Paolo, stretched out her arms wide, and rushing up close to him with mouth wide open, screamed in his face:

“It bothers you that they are begging? Provide for them then. Take them! I live hand to mouth, and I don’t know what I can do. It’s already much that I give them a roof over their heads.”

And then it was that a miracle occurred, as all afterwards said.

Don Paolo jumped down from his saddle, as if he wanted to tear out the old woman’s eyes. Instead, he grabbed both children by their arms, dug around in his pocket for his door key and thrusting the children before him, pushed them inside, without turning back to the old woman, who stood there frozen, as if a spell had been cast upon her.

For very indignation, words stuck in her throat.

“Witch. Witch!”, the parting shot of the Old Dragon, “Yes. I will take them.”

Further instalments of the story in translation can be read at https://beyondforeignness.org/5899

The original Italian text is available at https://www.liberliber.it/online/autori/autori-c/luigi-capuana/drago-e-cinque-altre-novelle-per-fanciulli-il/