Browse: Home   /   National Launch of Dante Under the Southern Cross Professor Rodney Lokaj Takes Us on a Journey from Melbourne to Spoleto in a Heartbeat

In 1321, 700 years ago, Dante Alighieri’s remains were interred in Ravenna; the city where Dante had lived out his last years in exile and where his tomb may still be visited today. 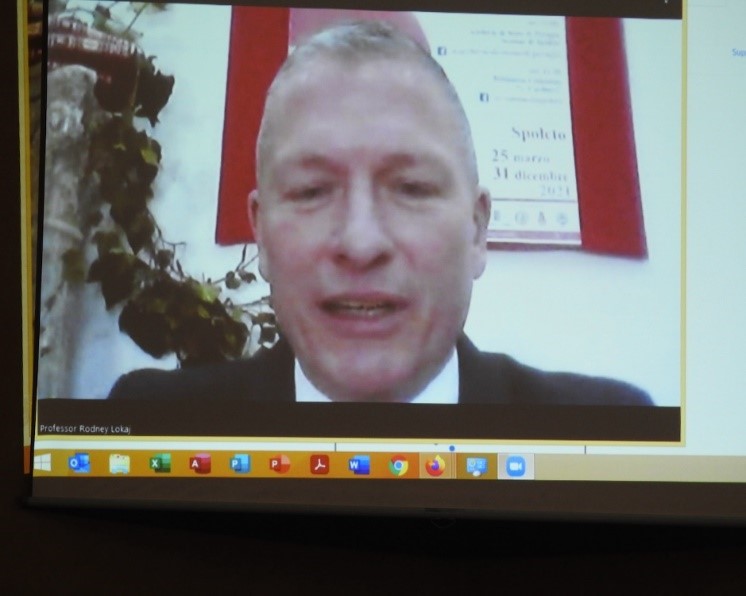 In 2021, global commemorations are being held around the world to mark the seventh centenary of Dante’s passing, including in Australia. The eleven Dante Alighieri Societies of Australia, with the support of Dante Rome, have joined together to host a series of face to face and online events to reflect on Dante’s significance to Australia and the world more broadly.

On 25 March 2021, to coincide also with Dantedì 2021, the Dante Alighieri Society of Canberra hosted the national launch of the seminar series as a locally, nationally (and internationally) webcast event. Around 65 people attended the face to face commemoration in Canberra and the online zoom webinar was joined by around 100 online participants. The event was also simultaneously webcast to the DAS Canberra Facebook page drawing a total online audience of over 500 participants.

An edited version of the webcast is now available and can be viewed via the national series website at https://danteaustralia.org/canberra-national-launch-dante-day-25-march-2021/

The event included a reading from the Divina Commedia by Dr Joshua Brown, Convenor of Italian Studies at ANU; speeches by Professor Franco Papandrea, President of DAS Canberra and by Her Excellency Francesca Tardioli, Ambassador of Italy; the main presentation by Professor Rodney Lokaj, webcast from Spoleto; and musical performances by Fleur Millar, Michael Row and Sam Row.

Proceedings were opened with a short video message from the Secretary General of the Dante Alighieri Society of Rome, Alessandro Masi, to mark the centenary. Il signor Masi noted the importance of the commemoration and announced the launch of a global digital platform “Dante Globale” hosted by DAS Rome: an initiative to provide support and technical facilities to the work of promoting Italian culture and language around the world. This is an initiative of particular importance, he noted, in this time affected by COVID-19 which has made online spaces so much more important to everyone.

Dr Brown read passages from Canto 1 of the Divina Commedia taking us to the beginning of Dante’s own poetic journey and his encounter with his own mentor, the ancient Roman poet Virgil. Dr Brown recalled the words of another great Italian poet, Eugenio Montale, about Dante:

“The further we get away from Dante and his world, the greater is our desire to know him and to make his world known to others” 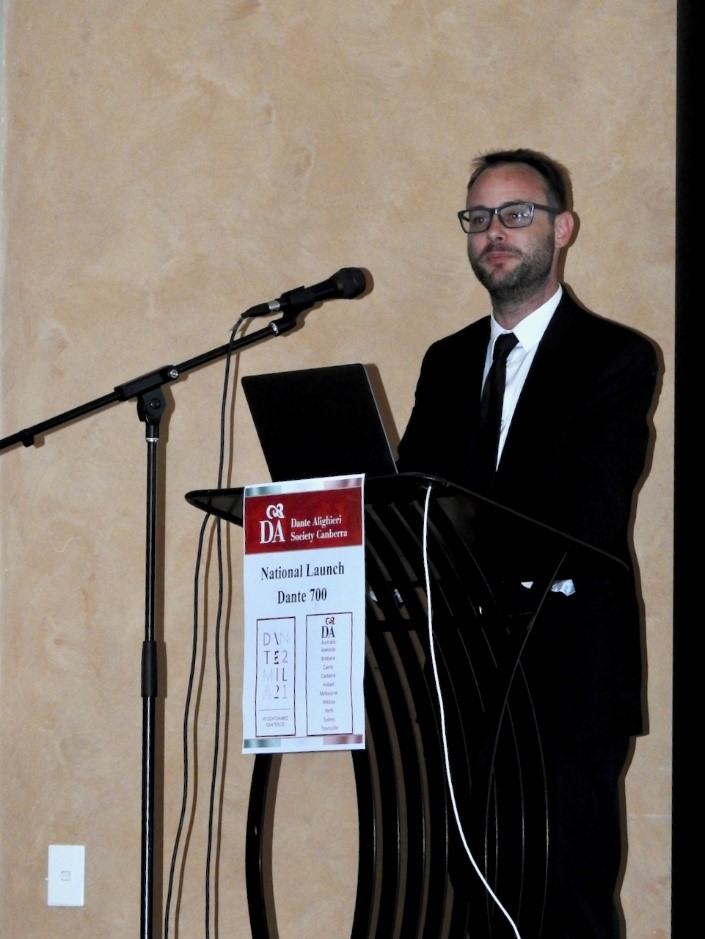 In introducing the National Launch, Professor Papandrea noted the significance of the national launch in the history of the Dante Societies in Australia, which have existed in Australia for 125 years. He observed that in 125 years, the societies in Australia had never before come together for a national initiative of any other kind, whether in respect of Dante or any other topic. Professor Papandrea thanked the 11 societies of Australia for their collaboration in the national seminar series and speakers for forthcoming events, as well as Professor Lokaj himself. Franco also warmly thanked the members of the Dante Alighieri Society of Canberra organising working group for their work in hosting the event: Josh Brown, Michael Curtotti, Fariba Imani, Alessandro Merola and Cathy Perre (Fariba also serves on the DAS Committee and Alessandro and Catterina serve as Vice Presidents) and DAS Committee Secretary Sam Palma. Professor Papandrea was himself a member of the organising committee and also has spearheaded the project including the national collaboration with other Dante Alighieri Societies. 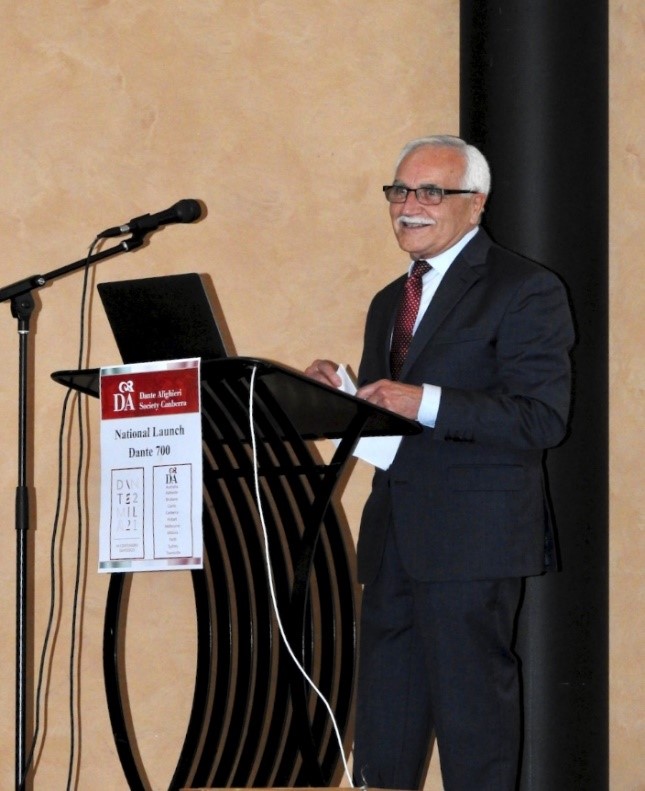 Franco also thanked Alessandro and David Wilson for their assistance with sound and technical aspects of the evening. Professor Papandrea also warmly thanked Dr Luigi Rambotti, the Director of the Spoleto section of the State Archives of Spoleto for hosting Professor Lokaj to speak to the gathering from the archives.

Her Excellency Francesca Tardioli also addressed the meeting reflecting on the significance of the commemoration. Dante, the poet, the philosopher, the politician, the person, she observed, embodies and symbolises Italian culture as a whole: and he is a paradigmatic representative of Italian culture. He was seminal in fostering the Italian language in an era when the “vulgar tongue” – the common speech – was not held in respect. His contribution was also much more significant – the universal principles embedded in his thought have influenced modern society. She shared the story of the first printed edition of the Divine Commedia. As a result of war in the city of Mainz, printers and typographers, masters of the new mechanical art of printing fled their home. Among them was the typographer Johann Numeister, a student of Gutenberg – who found refuge in Foligno; only 30 km from Spoleto. In 1472, together with the Italian entrepreneurs, Mariotto and Emiliano Angelini, he produced the first printed edition of the Divina Commedia. The paper for it was produced by Benedictine monks who also were great entrepreneurs managing two paper mills which they had maintained for around two centuries. The Ambassador observed that the story represents the sense of what culture was and still is for Italy. She expressed her gratitude to people around the world including the Dante societies for their joyful commitment to keeping alive the traditions of Dante. 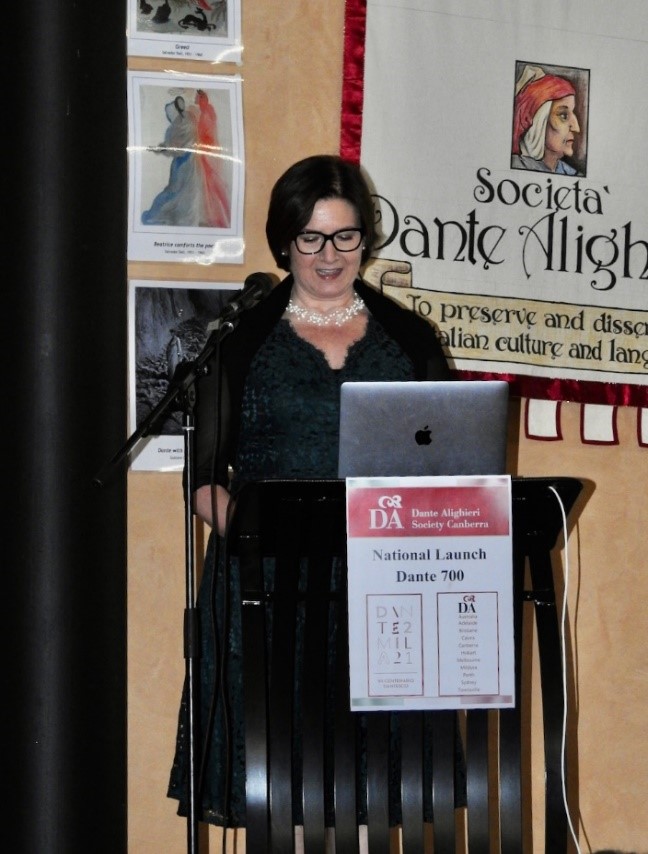 Participants then enjoyed the presentation of Professor Lokaj who shared his story. He recalled himself as a nineteen year old having his first encounter with Dante at Swinburne University “Lei, legga, traduca” “You, read and translate” his professor directed him. From these words, whose meaning was at

first unknown to him, Professor Lokaj began a life of adventure. Dante accompanied him on that journey, and he was a way into the past, into life itself.

A highlight of Professor Lokaj’s presentation was the first online viewing of newly discovered fragments of the Divina Commedia, which centuries before had been repurposed and bound into other collections such as tax records dating to 1401. The national launch was the first occasion in which the Dante fragments, now restored and being studied, were shown to an audience outside Italy. Dr Brown moderated a lively question and answer session with Professor Lokaj after his formal presentation. Following his presentation Professor Papandrea presented a Heidi Smith’s book Portrait of Canberra to Professor Lokaj.

The event was graced with the beautiful singing and music of Fleur Millar, Michael and Sam Row. They performed “Rosa” sung by Michael Row and a sacred piece, sung by Fleur and Michael, both pieces by Johannes Ciconia (Sam Row on piano). Ciconia was a Flemish composer (1370-1412) whose musical styles included madrigals. 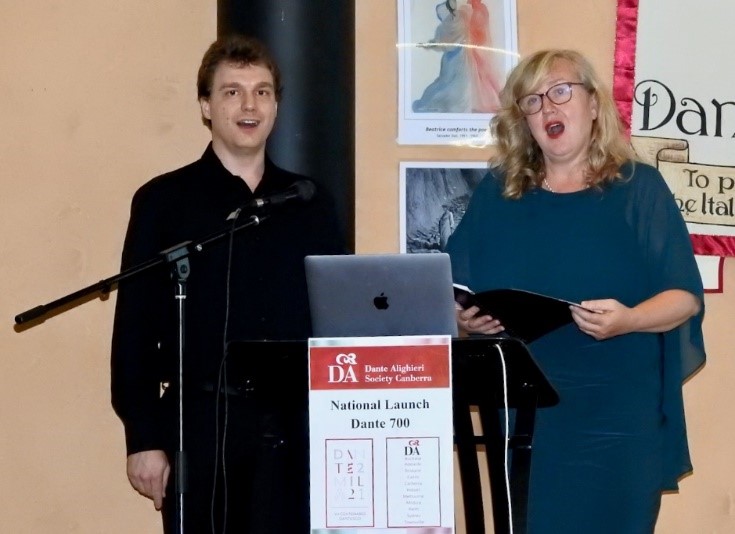 As reported on the front page of this edition, the next online event of the national series, following release of this publication, hosted by the Dante Alighieri Society of Sydney and will be held on 27 May 2021. Paolo Totaro AM will speak on the topic Dante and the Making of Italians in Australia.As this article goes to print, the second event of the national series “Dante’s Influence in Australian Poetry” is about to be hosted in Canberra on 23 April 2021. The event is being addressed by Associate Professor Gaetano Rando who is speaking on the influence of Dante in Italian-Australian poetry and by Dr Theodore Ell who will speak on Dante’s influence in Australian poetry generally. It will be followed by a local event in 29 April in Adelaide on the theme “The Influence of Dante in the Arts over the Centuries”. 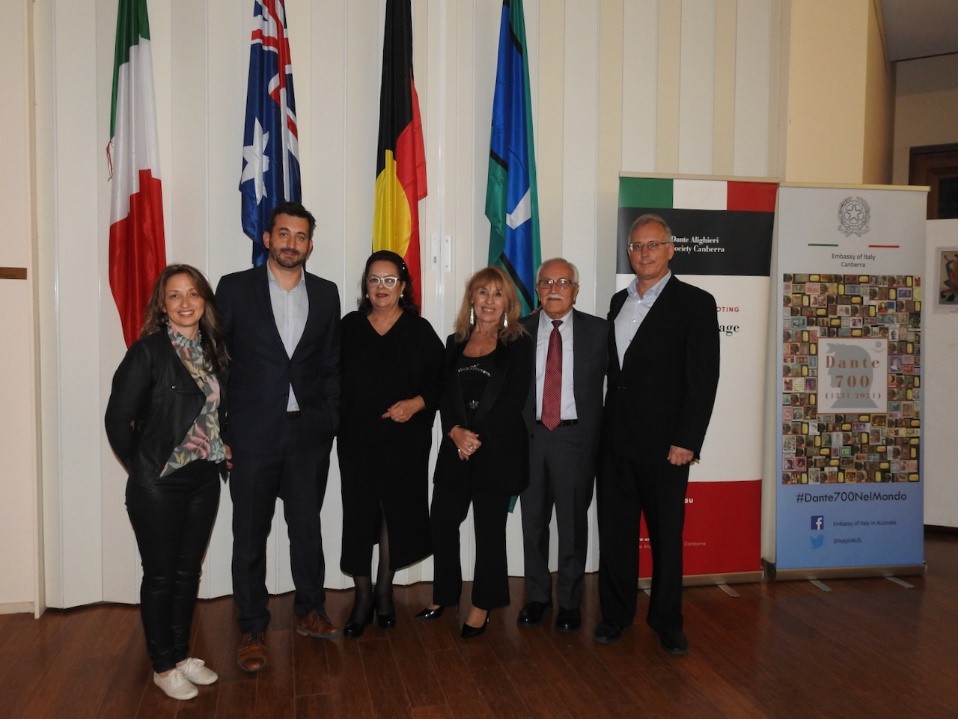 ← THE AUSTRALIAN INSTITUTE OF SPORT IN ITALY, A PRESENTATION BY WARWICK FORBES ON 17 JUNE 2021
Per un sorriso: anche in tempi di Covid si può! →