What I did on my holidays – Padua

Padua – not just the Scrovegni Chapel

Many tourists come to Padua just for a day, to visit the Scrovegni Chapel, and perhaps see the relics of St Anthony in the Basilica San’ Antonio.  But there is much more to do and see in Padua. There are many museums and walking through the streets of the old town is delightful. Here are just a few of the things I did during my six days there this October that stand out in my memory.

The University of Padua, founded in 1222, is the second oldest university in Italy and the fifth oldest in Europe. I took a guided tour through the oldest surviving part of the university, the Palazzo del Bo.  This translates as “the palace of the ox”, a name perhaps deriving from an inn which was previously on the same site, or from a nearby cattle-trading area. As well as the courtyard decorated with coats of arms, we saw the old lecture halls and the weathered wooden podium that is believed to have been used by Galileo when he taught at the university.

The Palazzo del Bo also contains the oldest surviving permanent anatomical theatre in Europe, dating from 1595. If you take the guided tour, you get a corpse’s eye view, visiting the side room where the body of an executed prisoner was prepared, and then entering the bottom level of the theatre. From there you look up at the steep and narrow, but elegant, tiers surrounding you.  In these, about two hundred students and other interested spectators, including artists, stood to watch the dissection. It was crowded and stuffy, there was of course no refrigeration, and dissections lasted for hours. Fainting, apparently, was common. 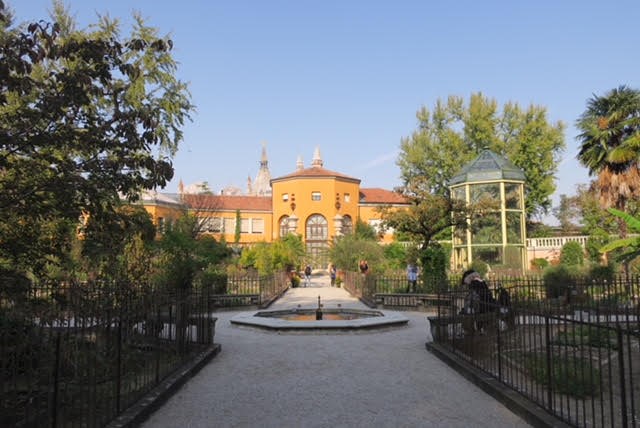 I also spent a relaxing few hours in the Orto botanico, which was established by the university in 1545 and claims to be the oldest academic botanical garden in the world that is still in their original position. In the oldest section, elegantly laid out beds are labelled with the scientific names of the plants, their place of origin, and their reputed medicinal effects. More modern scientific exploration of humanity’s use of the plant world is displayed in recently constructed greenhouses. You can, of course, just enjoy the beauty of the gardens.

Near the Basilica San Antonio, is the complex of the Loggia ed Odeo Cornaro, which was quite recently opened after restoration. It was built in the 16th century for the wealthy humanist patron Alvise Cornaro, who is credited with introducing Renaissance architecture to the Veneto. It was not intended to be lived in. It was purely a place for the cultured entertainment of family and friends, consistent with Renaissance ideals. The loggia was devoted to theatrical performances, and the adjoining, elegantly decorated, odeon was used for music, poetry and learned debates.

Also near the Basilica is the house where Galileo lived. It is privately owned and cannot be visited, but if you look very carefully there is a plaque on the facade. Not far away is the Prato della valle – a circle of grass within a statue-lined moat, all within a vast square – full of people relaxing. Markets are also held here. 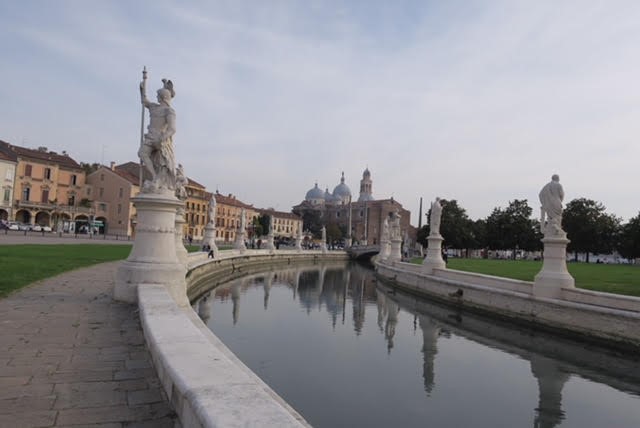 Frescoes in Padua – not just Giotto

There is no need for me to say much about the Giotto frescoes in the Scrovegni Chapel. (See “Gordon Bull’s Presentation on Giotto”, Dante Review May/June 2017.) They are magnificent. The fifteen minutes you are allowed with them on a pre-booked daytime visit was nowhere near enough for me. So I went again, and the second time bought a “doppio turno” – from 5pm you can buy from the ticket office two consecutive entries that evening, if available, and stay in the chapel for 40 minutes. If you are really interested in the frescoes, I strongly recommend doing this. I also recommend buying in the museum shop, and reading before your visit, a guide book that contains photographs of all of the frescoes, together with a brief explanation of the subjects depicted and hints of details to look out for. But these are far from being the only frescoes in town.

Although they do not surpass Giotto’s, the frescoes depicting the life of St James in the Basilica San’ Antonio also seemed wonderful to me. They are full of figures who, making allowance for the clothes and hairstyles of six and a half centuries ago, look as if you could meet them in the street today. They date from the 1370s, 70 years after those in the Scrovegni chapel – and are by Jacopo d’Avanzo Veronese and Altichiero di Verona, also known as Aldighieri da Zevio. Little is known about Jacopo d’Avanzo. Altichiero, who lived from about 1330 to 1390, was a follower of Giotto.  He also painted the beautiful frescoes depicting the life of St George in the Oratorio di San Giorgio, which is next to the Basilica, but seems to be largely ignored by visitors.

In the words of the Encyclopedia Britannica, “the style of these frescoes follows that of the great Florentine painter Giotto in the use of monumental, vital, and dramatically related figures. Altichiero’s figures relate more realistically than do Giotto’s to landscape and architecture, however, and Altichiero shows a greater concern with harmonious composition.”

Yet more frescoes, of lesser artistic value, but historically fascinating and overwhelming in their sheer quantity, decorate the vast main hall (salone) of the Palazzo della ragione in the middle of the old town. (You might possibly translate the name as “town hall”, except that the English expression doesn’t come near being grand enough. ) The enormous Palazzo, which was the city’s courthouse as well as the seat of its administration, was built in 1218 and expanded in 1306. The ground floor is occupied by specialty food shops and markets are held in the adjacent Piazza della Frutta and Piazza delle Erbe.

The salone on the first floor is one of the largest medieval halls in the world: 82 metres long, 27 metres wide and 24 metres high. The frescoes that cover its walls are based on the astrological theories of Pietro d’Abano, a professor at the university at the beginning of the 14th century. The frescoes are set out in sections and on different levels, so as to suggest relationships between particular seasons, signs of the zodiac, planets, and Apostles. When looking at them, it is probably best not to think about the sad fact that the original cycle was painted by Giotto, but destroyed by fire in 1420, and then repainted by lesser artists.