Dante Musica Viva at the end of the performance at the High Court of Australia, December 2013.

The Dante Musica Viva was formed under the direction of Francesco Sofo and Corinne Tarnawski in early 2005. It has grown tremendously since then. The DMV is made up of members of the Dante Alighieri Society of Canberra, whose love of Italian language and music has led them to share this passion with others through song. The DMV is supported by members of Canberra’s Mandolin Orchestra and other local musicians. For many years it was very ably led by its musical director, Francesco Sofo, who has now stepped back from this position. His extraordinary musical talents are sorely missed. Fortunately for the choir, its very capable former backup conductor, Saverio Palma, was able to pick up the chief conductor’s baton and is now officially the choir’s musical director.

The choir sings all types of Italian music, ranging from traditional folk pieces to opera arias. We have discovered that the demand for Italian music in Canberra is high and have performed at diverse events including the National Folk Festival, the National Multicultural Festival, the opening of the Italian Cultural Centre in Forrest and Italian community events, including Christmas carols.

While the DMV has professional musicians amongst the group that help to guide and teach us, most of us are dilettantes in the world of music, and so we like to have a lot of fun, and don’t take ourselves too seriously. For this reason we don’t require an audition for you to join us – all that is required is lots of enthusiasm and a willingness to learn and be part of the group.

As part of its promotion for the 2018 ACT Multicultural Festival, the ABC invited the Dante Musica Viva to appear on its radio program, Afternoons with Anna Vidot. The choir appeared in the first half-hour of the program broadcast from 2:00pm to 4:00pm on St Valentine’s day, February 14th, 2018. The choir performed Santa Lucia shortly after the start of the program. This was followed by an interview of about 10 minutes with the choir’s director, Professor Francesco Sofo, and then by a performance of Giuseppe Verdi’s Chorus of the Hebrew slaves (Va pensiero).

The DMV performs regularly around the Canberra region upon request.

The DMV repertoire is varied, and ranges from classic Neapolitan and regional folk tunes to popular songs and opera arias. Songs are sung in Italian or regional dialects. A list of songs included in DMV’s past and current repertoires, and others currently being learnt, and links to lyrics files, scores, and rehearsal aids can be found here. 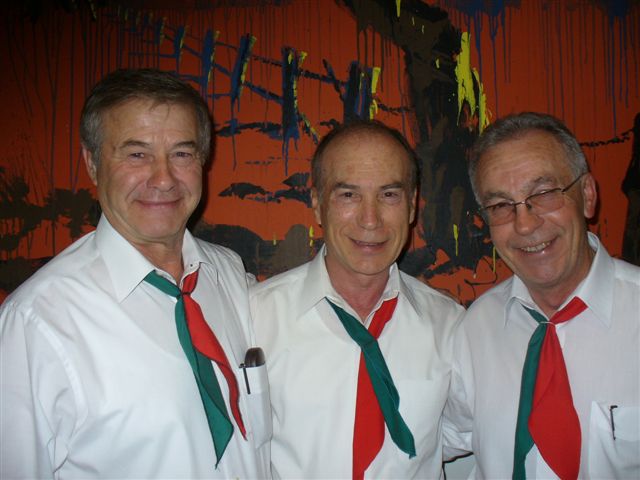 The “Three Tenors” of the Dante Musica Viva choir.