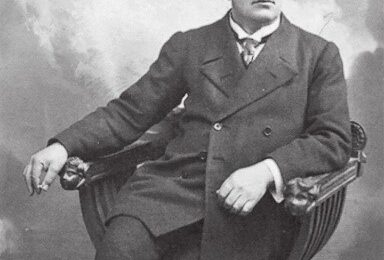 Despite growing up in Friuli (a long time ago!) I had never heard of this man. In recent years I learnt that a large technical college in Udine bears his name and so I decided to find out who he was and what he had done. My curiosity paid off.

Arturo Malignani was born and died in Friuli’s capital city, Udine (1865-1939). In his youth he had shown interest in the use of chemicals, in glass and in photography (his father’s profession), and he subsequently studied maths and physics. He became an entrepreneur and inventor. In 1894 he patented the ‘process of evacuating incandescent lamps’ which he subsequently sold to Edison, thereby becoming the richest man in Udine. His method is still used in today’s production of incandescent lamps. At the end of the 19th century, Udine was interested in introducing electric public lighting. The city became the third in Europe to do so (behind Milan and London) and thanks to Malignani’s invention, the quality of its lamps was the highest in the world.

Malignani was also a pioneer in the development of thermal energy and of hydroelectric power plants, later turning his attention to the production of cement.

Now I understand why the top technical college in Udine carries his name!

← L’ANGOLO DELLA LINGUA
Dante and ‘the Clash of Civilisations’ →