Browse: Home   /   Circling the square in St Peter’s: a suggestion for an itinerary in Rome* 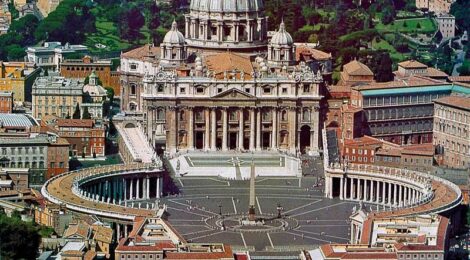 Circling the square in St Peter’s: a suggestion for an itinerary in Rome*

In my illustrated talk I proposed an itinerary of four days around Rome with the Basilica of St Peter’s as its centre, with four other historical sites in artistic relationship.  They are  the Basilica of St  Peter’s,  Hadrian’s Ancient Roman circular temple of the  Pantheon  (27BC-14AD), Bramante’s circular  temple of San Pietro in Montorio (1502), Raphael’s ‘The School of Athens’ in the Apostolic Palace, the Vatican, (1510-1511) and lastly Raphael’s Chigi Chapel in the church of Santa Maria del Popolo (1516 but completed in  1661).

The metaphysical core of the Basilica was Peter’s grave. In the Greek cross, it was located at the very centre of the building, the dome rose over it, symbolizing the transcendental Christ.All these Renaissance sites are in artistic relationship to St Peter’s with the Pantheon as inspiration. Vitruvius, the architect to Augustus in Ancient Rome, was greatly admired, and in his Ten Books of Architecture which appeared in print in Italy in 1486, he proposed that Man can be made to fit into a circle and square, and 1500 years later Leonardo da Vinci gave that idea memorable visual form. It is now called Vitruvian Man. Vitruvius described his figure in an architectural context, insisting that the proportions of sacred temples should conform to the properties of the ideal human body, the design of which in turn conformed to the hidden geometry of the universe. The two shapes had special symbolic powers. The circle represented cosmic and spiritual perfection, while the square represented the earthly and the secular. Those who proposed that Man could be made to fit into both shapes was making an age-old metaphysical statement. Leonardo expressed this idea when he said, that, “Man is the model of the World” (1480). In Christian terms the Man spanning both circle and square in the middle has perfect bodily proportions and with his arms outstretched he is Christ-like, both human and divine, and embodies the cosmic design of heaven and earth.

On our first day I would like to invite you to visit the site where St Peter was said to be martyred. In 1502, Donato Bramante, before winning the competition to design and build St Peter’s, was commissioned by King Ferdinand and Queen Isabella of Spain to build a martyrium, an exquisite small circular Roman temple on the  Janiculum Hill. The Tempietto contains in miniature exquisitely beautiful fashion the nucleus of St Peter’s in its reflection of balance and harmony, and in its perfect proportions.

Julius wanted a basilica that would dwarf the epic constructions of the Caesars and proclaim the power and the glory of Christ and the Church.  Bramante’s plan for St Peter’s, called the Parchment Plan, is of a symmetrical round Greek

cross with arms of equal length inside a square.  Bramante saw architecture a little like sculpture, where the wall mass is not straight and frescoed as in the old Constantinian basilica, but a plastic surface in constant movement, to all but disappear under applied columns or pilasters with the windows forming part of niches. These walls were indented rhythmically with huge statues, the great piers holding up the church were decorated with the Corinthian Order, and everything was of huge monumental proportions; for example, the pilasters were 83ft 6ins high.

Day Three Morning: A visit to The Pantheon

For St Peter’s coffered dome Bramante drew on the example of the Pantheon with the largest dome in the ancient world. The decoration of the marble floors in St Peter’s also mirrors to some extent that of the Pantheon.

Day Three afternoon: A visit to the Papal Chambers, to the Stanze, a series of frescoes by Raphael and, in particular, ‘The School of Athens’, commissioned by Pope Julius II,  of 1509-11.

The fresco is the closest approximation we have as to the inside of the basilica. Bramante, a friend to Raphael, sketched for him his notion of St Peter’s.

To conclude, Bramante’s and Julius’ design of Humanist architecture, gave birth to something dramatic and beautiful. I will finish with a quotation from R.A. Scotti’s lively, concluding description of St Peter’s:Inside this pilgrim church is a small family chapel designed by Raphael for Agostino Chigi, rich banker to the Papacy, called the Chigi Chapel.  The exterior, hidden from view on the roof, is of a miniature round temple.  On the inside you enter a very small round chapel, and suddenly an extraordinarily colourful sight opens before you: Raphael, the great painter, on using patterns of precious coloured marbles on the walls to painterly effect, such as  the ancient yellow giallo antico taken from Namibia, has  introduced colour to Renaissance architecture!

Two million tons of stone transformed into spirit creates what Rome’s preeminent historian, Edward Gibbon, called ”the most glorious structure that has ever been applied to the use of religion.”

← L’ANGOLO DELLA POESIA
WHO IS DANIELA SCACCABAROZZI, THE SPEAKER AT OUR CULTURAL EVENT OF 20 MAY 2021? →