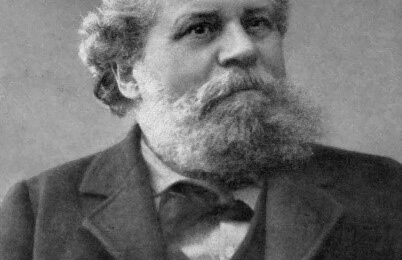 The poems of Giosuè Carducci were some of my favourites during my school years including the one below, with its echoes of autumn.

Carducci was born in 1875 in the province of Lucca and died at Bologna in 1907. In 1906 he was awarded the Nobel Prize for Literature, the first Italian to receive the prestigious award.

Carducci, a high school teacher and subsequently professor of Italian literature at the University of Bologna, was a prolific writer and poet who also translated works of literature from Greek and German. One of his students at the university was the young poet Giovanni Pascoli, who subsequently succeeded him at the university. Carducci’s early poetry was inspired by the ‘stilonovo’ [new style] of Dante and Petrarch.

Carducci is particularly relevant to us as he led a group of intellectuals in founding the Dante Alighieri Society in 1889 – with the aim of promoting the Italian language and culture.

Here is a translation of Saint Martin’s Day found on the internet:

The fog to the bare hills / soars in the thin rain, / and below the wind / howls and churns the sea;
yet through the hamlet’s alleys / from the fermenting casks / goes the pungent scent of wines  / to touch a soul with glee.
On the firewood, turns / the skewer crackling: / stands the hunter whistling, / on the threshold to see
in the reddening clouds / flocks of black birds, / like exiled thoughts / as in the dusk they flee.

← Grotta Azzurra – Blue Grotto
Circling the square in St Peter’s: a suggestion for an itinerary in Rome* →