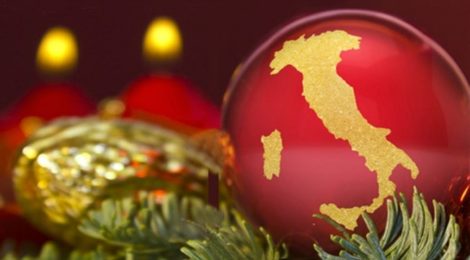 Il Natale (Christmas) in Italy is a time for family! In fact the saying goes ‘Natale con i tuoi e Pasqua con chi vuoi’, meaning that Christmas day has to be spent with the family while Easter can be spent with anyone we want!

Il periodo delle festività (the festive season) begins on the 8th of December and ends on the 6th of January and each region celebrates with its own special traditions. However, all over Italy most traditions are shared.

Le decorazioni (decorations) are traditionally put up on La Festa dell’Immacolata (The Feast of the Immaculate Conception on December 8th) and taken down on Epifania or Giorno della Befana (the day of Epiphany – 6th of January).

The traditional Albero di Natale (Christmas tree) is present in every house but the most important feature is Il Presepe (the nativity scene). The word presepe comes from the Latin and means ‘manger’.

La Befana (the day of the Epiphany – 6th of January), is the day in which Gesù (Jesus) manifests himself to I tre Re Magi (the three Wise Men). “Epiphaneia” in Greek means “manifestation” and the word “Befana” derives from the Greek word. The tradition of La Befana is thought to go back as far as pre-christian times. La Befana, an old looking but gentle woman, brings regali (presents) to children who have been good. (For the Legend of La befana see over the page).

Food plays a big part in all of these festivities. Il pesce (fish) is eaten both at La vigilia (Christmas Eve) and on l’ultimo dell’anno (the 31st of December). Order your fish well in advance or get to the pescivendolo (fishmonger) early. Il menù di Natale (Christmas Day menu) tends to be lasagne followed by l’arrosto (some kind of roast meat).

Il dolce (dessert) is either il Panettone or il Pandoro. There is a bit of a divide here: Would you all agree?

Sending out Biglietti di Natale (Christmas cards), is not really a tradition in Italy. So it’s time to wish you all :

The Legend of La Befana

The legend is that on their way to deliver presents to Jesus, the Three Wise Men – (I Re Magi) came across La Befana. She provided them with shelter for a night, as she was considered the best housekeeper in the village, with the most pleasant home.

The Re magi invited her to join them on the journey to find the baby Jesus, but she declined, stating she was too busy with her housework. Later, La Befana had a change of heart and realised it had been wrong not to go with them, so she ran off with her broom in search of the Three wise men, bearing her own presents for the baby Jesus. La Befana never caught up to them. It’s said that La Befana is still searching for the baby Jesus to this day.

On Epiphany night, La Befana goes around leaving presents for children, going down chimneys to deliver toys for girls and boys. She leaves the good children toys and caramelle (candy) while the bad children get carbone (coal), onions or garlic.

The Befana comes at night

For the small, little children she leaves a lot of little chocolates,

For the bad little children, she leaves ashes and coal.