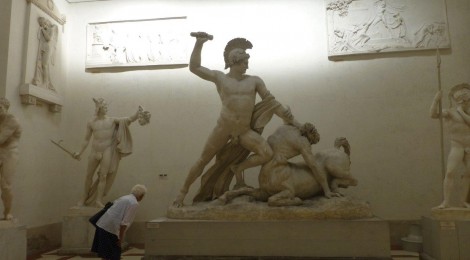 My annual pilgrimage to Italy has recently concluded, and I would like to share with you some of the impressions I came away with. Of course this is totally subjective but it is what struck me over the period late-July early September.

Australia did not really make the news in Italy except for when the famous former Juventus player Del Piero was signed up by the Sydney FC – then it was splashed across all newspapers and TV news. It just shows you how prominent soccer (‘calcio’) is in Italy.

A couple of events attracted much media coverage: the death of the former cardinal of Milan Carlo Maria Montini and the Venice Film Festival. With regard to the first, it was reported that Montini had expressed views that were not in tune with official Vatican dictum, eg on the use of condoms in some cases as representing the lesser of two evils; the possible use of frozen embryos no longer required; the embracing of people who are divorced, homosexual etc.  The people of Milan (believers and non-believers) turned out in force to farewell the body of the cardinal laid in state in the Duomo. The Vatican downplayed the role played by Montini in getting close to the people and dealing with reality rather than cold doctrine.

The Venice Film Festival left Italians disappointed in that none of Italys’ entries was awarded a prize. Indeed there was much expectation that Bellocchio’s Bella addormentata (on the controversial story of Eluana Englaro whose parents decided to cease feeding her with a probe after 17 years in a vegetative state, dividing Italy) would earn a gong. The director had received a long-standing ovation on the evening of its presentation.

The major social issue that engaged the media was youth unemployment – over a third of all young people is looking for work and most of those who are employed are in casual positions. Many think that youth unemployment will inevitably lead to a generation of disappointed people who are unable to have a career, form a family, buy a house. Unemployed youth live at home with their parents and therefore are a continuing drain on their resources.

Youth unemployment is linked to the dire state of the economy. Once the engine room of small-to-medium size enterprises, the Veneto and Friuli Venezia Giulia regions are going through very difficult times, with constant closures. In the large industrial area of Maniago, near my hometown in the province of Pordenone, one third of the firms has closed and each one of those used to employ 50-150 people. The multiplier effect of firm closures and unemployment is obvious: fewer people eat out, go shopping for clothes and shoes, and go on annual holiday. The economic crisis was on everyone’s lips (those still in work felt vulnerable) and received constant media coverage.

Statistics on the teaching profession released during this period pointed to a totally feminized occupation: women make up 96% of primary school teachers, 78% of those at middle level (scuole medie) and 65% of teachers at high school (licei, scuole superiori). Teaching in Italy is characterized by extraordinary levels of casualisation – some teachers have their contract renewed annually for over 15 years before being made permanent.

The Monti government has embarked on a major project: to change people’s attitudes towards tax evasion. Traditionally, Italians pride themselves in paying little if any tax (“others don’t pay, why should I?”). Indeed, as they argue, this is one area in which you need to be a “furbo” (wiley) because only the “fessi” (the stupid ones) pay all taxes due – and follow all the rules. The government has launched a clever advertising campaign that likens tax dodgers to parasites. It will be interesting to see whether the average Italian will be converted by the campaign…..

Monti’s government was receiving patchy approval – officially, politicians by and large support it but the average person was complaining about rising taxes and the age for pension eligibility. Many on the right side of politics argued that things were better under Berlusconi. Most people did not appreciate that the stringent measures introduced by Monti were designed to stem the worsening of public debt and restore Italy’s international credibility. With very few exceptions, the views of the foreign media were not reported or given any weight when reported.

On the cultural side, I made a lovely trip to Possagno (Treviso) to visit the Museo Antonio Canova. The great 19th century sculptor was born there and the house where he lived has now become a gallery displaying his works, which included many drawings and paintings of dancing women. Attached to the house there is a “gipsoteca” where almost all of the statues of Canova are displayed in their original form – gypsum. Canova used to make them in this medium before carving the marble. One of my favourites was the Venere Italica – a reproduction of which I had bought a few days earlier as a statue for my garden. It now stands near a special rock I had collected from a nearby ‘bosco’ and which I had analysed by two geologist friends. I was told that part of this rock (with the technical name of ‘breccia di versante’) date back to the cretacean era (70-140 million years ago) and the porous rock that cements those parts together is “only 1 million years old”. What a find!

Another cultural trip took me to Venice to admire the religious works of Tiziano whose birthplace at Pieve di Cadore (also in the Veneto region) I had visited as part of a guided tour organized by my village. This day-trip had also confirmed my great love for the Friulan Alps and Dolomites. We passed through Cortina d’Ampezzo where the winter Olympics of 1956 were held: the downhill ‘pista’ is still there.

I particularly like attending ‘rievocazioni storiche’ in the towns that were once owned by the nobility and which still have a functioning ‘castello’ medioevale. This year I attended one at Spilimbergo during the afternoon, featuring people dressed in elegant velvet clothes with the ‘conte’ and the ‘contessa’ at the head of the procession but also including common peasants, piglets, chicks, drummers, fire eaters, dancers, hunchbacks – the full gamut of humanity. The second was at night at Valvasone. Here they turn off street lights and keep a few lamps just for safety – but torches and ‘fiaccole’ abound. Medieval food and drinks, medieval games (which I tried), jewellery, archery, theatre, music (mainly drums but also string instruments) livened the narrow, exceedingly crowded streets of the little town where I attended ‘scuole medie’ in the 50s. Some trivia for you: it was at these scuole medie that Pasolini had taught Italian a few years earlier; and Valvasone’s duomo holds one of only two functioning organs dating back to the 16th century.

Religious festivities and other excuses for holding country festivals (eg la sagra dell’oca, del mirtillo, del formaggio, della patata, del prosciutto, della rana) as well as religious processions, dancing at the sagre, attending conferences for Friulan people living abroad, and visiting friends and the many relatives took up the rest of the time. A welcome immersion in “friulanità”  and tradition in which I gladly bathe every year.