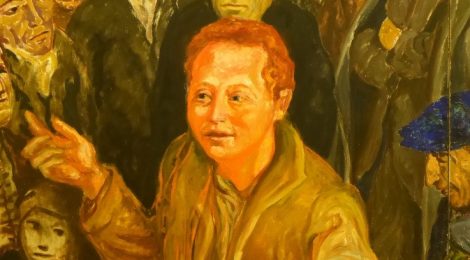 Rocco Scotellaro was born in 1923 in the province of Matera, a very disadvantaged area in Southern Italy. It’s worth noting that Matera has come a very long way in the last century: up till the early ‘50s people lived in cave dwellings while in 2019 the city shone as the European Capital of Culture.

The poverty of Scotellaro’s surroundings and his own personal experiences influenced his work and his poetry. He became a labour organiser, a mayor (at the age of 23) and a social researcher. His neo-realist poetry movingly portrays the harsh life endured by peasants and workers. In his twenties he met the renowned writer Carlo Levi, author of Christ stopped at Eboli who had been sent to Lucania in exile by the Fascist Government. In 1954, one year after the poet’s untimely death, Levi edited a collection of Scotellaro’s poems which won the Viareggio Prize. Levi later included Scotellaro in his mega portrait of life in Lucania in the ‘40s, an astonishing painting that I saw in July at Matera.

Here are two short poems. They are found, with the English translation, in The New Italian Poetry – 1945 to the Present by Lawrence R. Smith

The portrait’s all feet

In the grotto at the end of the alley

they sit around the dead old woman,

together at the toes.

You see the distant face on the pillow

her stomach puffed up with camomile.

The portrait’s all feet

seen from this place where you dance.

camminano i muli a dolci ferri

The full moon fills our beds,

the mules step along quietly

and the dogs gnaw bones.

You hear the donkey in the stairwell,

its shudders, its snore.

my mother has been sleeping for sixty year.