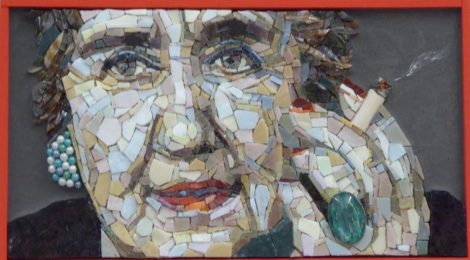 Alda Merini was one of the foremost women poets of the last century. Born in Milan in 1931, she died there at the age of 78. Her life was marked by frequent and lengthy bouts of mental illness during which she was cared for in mental institutions. Her writing style is described as ‘intense, passionate and mystic’ and one of her masterpieces is the poem The Other Truth. Diary of a Misfit, inspired by her time in mental institutions. She knew many of the great literary and intellectual figures of the 20th century, published numerous works, received several literary awards and
in 1996 was nominated for the Nobel Prize in Literature. In the same year she was awarded an honorary doctorate in Communication Theory and Language by the University of Messina – quite a journey given that as a young teenager she had failed the high school admission test in Italian! A documentary titled Alda Merini – a Woman on the Stage was presented at the 2009 Venice Film Festival. Following her death, Italian president Giorgio Napolitano stated: ‘Italy has lost an inspired and limpid poetic voice.’ Merini, a smoker, was often portrayed holding a cigarette, as in the portrait above.

On the internet I found this translation, by Chiara Frenquellucci and Gwendolyn Jensen:

I open the cigarette / as if it were a leaf of tobacco/ and I avidly inhale / the absence of your life. / It is so beautiful to feel you’re out there, / yearning to see me / and never being heard. / I am cruel, I know, / but the code of poets is this: / a long silence, burning / after a very long kiss.