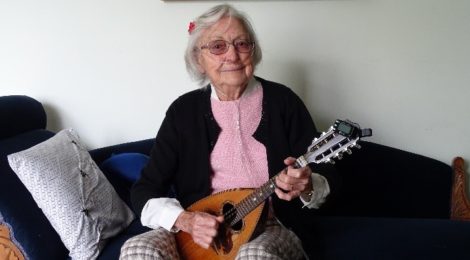 The story of Louise’s mandolin starts with Louise’s father – Charles Thomas Stanley – an Australian farmer who could play any stringed instrument as well as sing.

During WWII he was part of the Western Australian 28th Battalion sent to fight in the Middle East.  On the night of the 26-27 July 1942, 65 men from the 28th Battalion were killed in action and 490 captured, in an attack on a place called Ruin Ridge (the first battle of Alamein), in Egypt.  Louise’s father was one of the survivors taken to Benghazi and then to Italy, where he was a prisoner of war in an Italian POW camp in Northern Italy.  Here he learnt Italian and later managed to escape with other prisoners.  He went from village to village and would not have survived but for the Italian farmers who risked their lives to let him work on their farms and passed him on from farm to farm.  At one of these farms someone asked him if he could play an instrument and when he said he could play any stringed instrument they brought out a very old mandolin and asked him to play.  So after a long day’s work he would play and they would all sing in Italian.  He played so well, that when he left the village they gave him the mandolin to take with him. Eventually he got to the foot of the Alps and, still carrying the mandolin, climbed over into Switzerland where he remained until the end of the war.

In 1944 he was repatriated to Australia by ship and the mandolin came with him.  He told his children that whoever could learn to play a tune on it could have it. Louise, who could not read music, learnt to play a tune by ear and became the proud owner of the mandolin at 14.  She played it for two years but being a teenager she put it to one side and due to life commitments left it on the shelf for nearly 60 years.

Now living in Canberra, Louise saw an advertisement for the formation of a Canberra Mandolin Orchestra (CMO) and at 73, she auditioned and played a piece by ear.  As she was accepted, she decided it was time she learnt to read music and taught herself.

One of the members of the CMO was Francesco Sofo, an Italian from Calabria who had just started the Dante Musica Viva Italian choir and was looking for musicians.  Louise agreed to play the mandolin for the choir and from 2005 to 2017, when she retired for health reasons, she was the choir’s mandolin player.

Annie is a member of the Dante choir. She wrote this article, after interviewing Louise, following a request by Italian mandolin maestro Carlo Aonzo who was seeking interesting mandolin-related stories in the context of research he was conducting for a documentary.