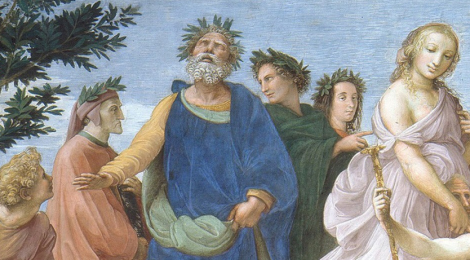 Dante Alighieri is best known for his masterpiece “The Divine Comedy” but as Michael Curtotti pointed out in his recent presentation at the Dante Alighieri Society of Canberra, there is much more to the man.  Michael took those present on a captivating 40-minute tour of Dante’s life, works and times and of his enormous influence on both Italian language and culture and Western culture generally.

Starting with Dante’s youthful love poetry, the audience was led to many landmarks along Dante’s life journey including his political involvement in Florence that led to his exile from the city, his treatise De Monarchia on secular and religious power, his masterpiece, The Divine Comedy written in the Florentine vernacular, his influence on the unified Italy, and his elevated status in Western culture.

Michael was an excellent ‘tour guide’ and captivated the audience with expert commentary at each stop.  Focusing on the man rather than the literary genius, the audience was presented with a young  Dante’s smitten by an encounter with his mythical ‘Beatrice’ illustrated with the aid of an 1897 painting by Raffaele Sorbi.  Later as an adult, he was much influenced by his direct involvement in the factional violence and political conflict that were rife in medieval Florence.  It was this that led to his exile and clearly influenced his political exposition in De Monarchia as well as the form of punishment or invective dished out to prominent personages in his Divine Comedy narrative.

In the nineteenth century, Dante ’s appeal underwent a considerable revival both in Italy and elsewhere in the world.  As noted by Michael, prominent actors in the Italian unification struggle such as Giuseppe Mazzini, “saw in Dante a model of a moral stand against injustice” and the poet Giosuè Carducci argued that “Italy was a literary expression and a poetic tradition” to counter Metternich’s “geographical expression” assertion. Carducci, of course, was a great admirer of Dante and in 1889 led the founding of the Dante Alighieri Society, which now boasts an international network of over 400 autonomous branches throughout the world, including our own in Canberra.  Dante’s standing in the English-speaking in the nineteenth century was underscored with T. S. Elliott’s remark that “Shakespeare and Dante divide the world between them, there is no third.”

The presentation was followed by lively discussion with the audience.

Dante Alighieri’s name is written into the title of our Society. But who was the man? And what might he mean to us today? We can enjoy his beautiful poetry without the back story, but it certainly helps to know the man. Of course we cannot capture such a complex and influential life in a brief article. The world he lived in was very different from our own. Florence, where he was born was not yet a great republic. Italy was a collection of duchies, republics, kingdoms and the Papal States, under the loose control of the Holy Roman Empire. 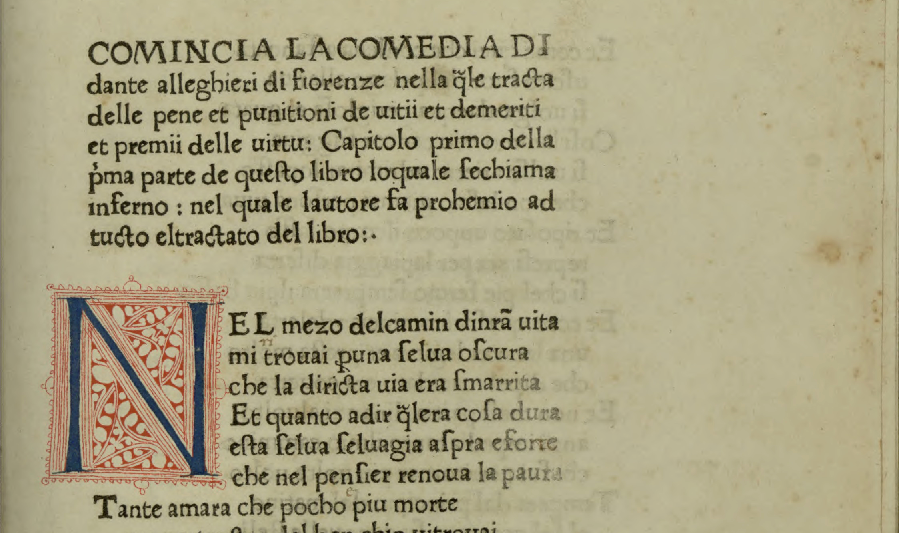 From the first printed edition of the Comedy – 1472, Foligno

As a young man Dante wrote love poetry. La Vita Nuova, which Dante wrote in honour of Beatrice, is about the experience of love. It begins with adolescent love and ends (after Beatrice has died) with Beatrice becoming a transcendent Christ-like symbol. Beatrice appears again in the Divine Comedy; where she helps Dante on his journey.

For a brief time Dante was a political leader in Florence. Yet soon he is exiled. It is after his exile that his greatness really emerges. Where others sent into exile died (for example his own close friend); Dante rises by strength of his poetry and writings alone, ultimately defeating his enemies.

Among his writings is de Vulgari Eloquentia, where he imagines the Italian language: the everyday speech around him, as a literary language. He boundaries of his language are those which Italy now largely occupies. When he wrote the Divine Comedy, he proved that this language could convey great beauty and philosophy. This is why we can call him the Father of Italian.

Dante’s de Monarchia is a work of political philosophy. For him, the Roman Empire was as an era of peace, something that his world did not have. He wrote that humanity was only perfect when unified and lamented the suffering he saw from human conflict and division. For most of his life there had been no Emperor. Thus, he argued the world needed a single monarch.

In the Divine Comedy, Dante’s greatest work, the inner spiritual life is most important. On the surface it is a heroic quest through hell, purgatory and heaven. But at a deeper level, it is about the human condition and about human failings such as lack of self-control, anger and malevolence. As we read the Comedy we meet well-known figures of all walks of life (including political and religious leaders – many of them Dante’s enemies), and we learn more about the human failings led them to their fate.

Dante was profoundly Christian in his thinking. So much so, that many Christian thinkers believe he transformed how we understand Christianity. Yet some of his works (including parts of the Comedy itself) were banned for centuries as heretical.

For centuries Dante fell out of favour and writers like Petrarch, became the standard for Italian writing.  Yet in the 19th century, Dante was once again popular. Writers like

Giuseppe Mazzini, himself an exile, saw in Dante a model of a moral stand against injustice. In 1865 the new nation celebrated in Florence, honouring the 500th anniversary of the birth of Dante. Dante had become a symbol of the hope of a new nation. The international audience that attended underlined that Dante now important to the world. He regarded himself as a citizen of the world, and the world in turn adopted him as their own. Thus, T.S Elliot wrote “Shakespeare and Dante divide the world between them, there is no third.”

Dante’s poetry still moves and delights, and the very idea of Italy is connected with him. As the Rinascimento poet Giosuè Carducci wrote:  “When Prince Metternich said that Italy was a geographical expression, he missed the point; Italy was a literary expression and a poetic tradition.” Of course, Italy is much more.