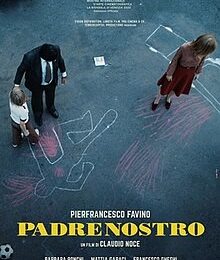 Claudio Noce began his directing career with documentaries, and there is a touch of the documentary and autobiography in this film, Padrenostro (2020), for Claudio Noce, the director, has loosely based his film on the 1976 assassination attempt on the deputy police commissioner Alfonso Noce, his father, by a far left terrorist group, Nuclei Armati Proletari, active in Southern Italy from 1974 to 1977 during the years of terrorism in Italy, called the ‘Anni di Piombo’.

A central theme of Padrenostro is the deepening relationship between the young ten year old son, Valerio, who suffers from the truly horrifying experience of having been a witness to his father’s attempted murder by terrorists on the street in front of his family’s apartment, and then suffering with the lack of his father’s presence while he recuperates. His father’s decision to deepen the support his son needs and move to his family country home in southern Italy, which is supportive and affectionate, leads to a change in the boy. I found the acting convincing and this situation absorbing.

And so, in this film, the age old theme of father-son relationship is set in a society overloaded with tension, fear and violence. The boy is a clever, strongly visual creative child: for example, he memorises the police outline of the victim on the road to draw it again on the road for his new friend, Christian, a few years older than the boy. For this viewer, there was a problem of Christian’s identity. Is he the new friend to be trusted. Where is his family? To help me with this review I went to comments on the internet, and it seems that the boy is a common problem for viewers of this film. One reviewer suggested that Christian may well be another aspect of Valerio’s difficult personality at this time, a kind of ‘double’. He encourages the younger boy to take risks, to enjoy danger, such as riding pillbox and pushes him to steal. I found this idea convincing, in retrospect.

Thus, right from the beginning of the film, sight and its veracity is important, for observing and being observed by others can be downright dangerous, as people at this time could be hunted down and murdered. The problem extends to who was trustworthy: some of Valerio’s school friends sided with the terrorists. After Valerio’s physical test of strength before his class the boy answers his coach’s question as to the colour of his eyes by stating that his eyes are green; however, the tester observes his eyes and disagrees and writes them down them as blue. Is Valerio protecting himself by creating a double?

Real change is initiated by the father when he decides to give his troubled son a change of place and take him to his family’s home in the countryside of Calabria. Here, within the warmth of grandparents and family, his father introduces him to the sea and the countryside. Calabrian country family life proves to be a long way from the centrality of terrorism against the State occurring in Rome at that time. But at the same time the father’s presence is needed to save Valerio from his self destructiveness, to make him whole.

Finally, I think that the film suggests that trust really returns in the next generation, with the passing of time. The two ‘characters’ of Valerio and Christian meet by accident as middle aged men, they give one another an affectionate hug, have a coffee together and the two sides of Valerio come together in warmth, to overcome this difficult period when he was a child during terrorism and there was an assassination attempt on his father.

I lived in Italy during the years of the Anni di Piombo. I remember getting on a train with a small suitcase. As I tried to put my case in the ‘rete’ above the seat I saw people stiffening up, nervously asking me where I was going. Once Italians would chat cheerfully on a train, during this period no one said a word. This film is suggesting that the healing of that dramatic period came about in time, but the years of terrorism were a cruel difficult time, specially for innocent children whose parents were strongly involved.

2020, director and screen writer Claudio Noce. Winner on the Venice Film Festival of 2020 for Best actor, Pierfrancesco Favino, for his role of the father Alfonso.