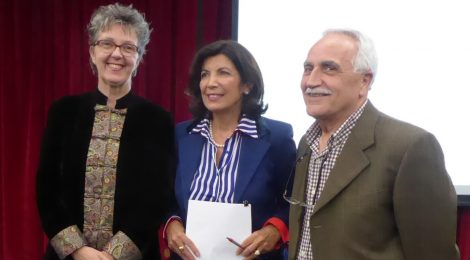 With the participation of actor Bianca Bonino.

Concetta Cirigliano Perna  was born in the Province of Matera, and now lives in Sydney.  She has degrees in Political Science and International Law, and has taught at universities in Milan, Turin and Sydney, as well as having written a number of books. Bianca Bonino is an actress, trainer of those performing in the Commedia dell’arte, and is a theatre director.

A large audience had the pleasure of hearing Concetta Cirigliano Perna’s fascinating and informative presentation on the city of Matera, in Basilicata, in southern Italy. Matera has come to prominence this year as the city that won the European Capital of Culture 2019.  Such a prestigious award is a great compliment to the people of Matera, whose celebrations include a huge program of events, such as conferences, exhibitions, musical events and feasts, and even events devoted to the great mathematician, Pythagoras, one of her most famous inhabitants, on the ‘Poetica dei numeri primi’.

Concetta’s narrative began with Matera’s famous, even notorious, physical location, as her people carved out homes from soft tufa rock over millennia, and lived in caves. Matera was in fact an ancient Paleolithic city, one of the oldest in the world. And inside this ancient area, came, conquered and lived other peoples from Magna Grecia, from Rome, the Longobards, the Byzantines, the Arabs, the Swabians, the Angevins and the Normans and these are not all! Marvelously for the audience, Concetta illustrated her presentation with many superb slides, which allowed the viewer to actually enter these simple houses and see how people lived.

The cavernous hilltop town revealed itself to be rich in history, inventiveness and humanity: beautiful Byzantine churches and monasteries were built, sometimes we could see houses with flat roofs often resting on top of the one beneath, with stairwells or paths connecting them, winding up and down. The people of Matera built a highly complex and effective system of irrigation, with cisterns and canals, vegetable gardens and hanging gardens from the roofs were planted, with wells in small clearings where people gathered. According to Concetta, even their special breads are still being made. I read further and understand that the flat roof could serve as a burial ground: those alive lived underneath in houses and the dead were buried on the surface. It seems that the people of Matera communed with the dead who lived above them by lighting candles at night close to those buried. When the hillside was gazed from afar, as could happen centuries ago, it became a picture of   ‘un cielo stellato’, a star-filled sky lit up within the city itself! Concetta alluded to this at the end of her talk.

Then, tragically, particularly in the twentieth century, Concetta showed horrifying photographs of the poverty that descended on the city, and, in particular, on the children.  It seems that forty percent of babies and children died.  We were fortunate to have the presence on the stage of the actress Bianca Bonino, who, in her clear and delicate voice, read passages describing such poverty from Carlo Levi’s book, Cristo si è fermato ad Eboli, published in 1945. Concetta explained that Carlo Levi was the first writer to make public the horror of such poverty, and then, with Togliatti’s intervention, change came.  Levi’s book was the first step in Matera’s  ‘destiny overturned’. Later, famous Italian and Hollywood film directors discovered the city to be a perfect backdrop to stories from the Bible. The city became a great tourist attraction and is now prosperous.  How moving it was to see the film of the people of Matera when they heard the news of the prize of European Capital of Culture 2019!  Destiny was truly overturned!

Concetta answered many interesting questions posed by the audience, and I am sure that everyone came away enriched and moved by her presentation.  The President of the ACT Dante Alighieri Society, Prof. Franco Papandrea, thanked her on behalf of the Society and audience, and hoped she might return to address us again one day soon. He also warmly thanked Bianca Bonino for her excellent rendering of Levi’s work, and which added so much to the evening.