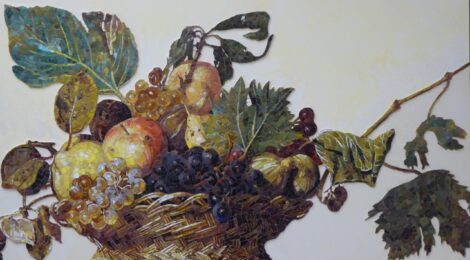 Besides its natural attractions (the Alps and mountain lakes) the NE region of Friuli appeals to tourists for its medieval towns (like Spilimbergo) and ancient Roman settlements (Aquileia).

It’s in Spilimbergo that in January 1922 the Scuola Mosaicisti del Friuli (SMF) was founded. The celebrations marking this important milestone began on 22 January with the launch of a book that retraces its genesis, its history and evolution.

The current premises opened in 1932. They are named after Irene di Spilimbergo, a local XVI century artist who trained under Titian but died prematurely at the age of 21.

Spilimbergo is the centre of the mosaics district of Friuli from which generations of mosaic and terrazzo craftsmen originated and subsequently emigrated to Venice and many European countries where terrazzi ‘Venetian-style’ were particularly in demand. One of these mosaic artists, Gian Domenico Facchina, decorated the Opéra Garnier in Paris and invented the much less expensive ‘indirect’ mosaic technique for the preparation of large-scale mosaics off-site.

The main purpose of the SMF was to train Friulian young men as artists/craftsmen. For many years now the Scuola has been attracting students from other parts of Italy and even overseas; and young women now account for about 2/3 of the student body.

The professional course is of three years’ duration and combines a strong theoretical base with extensive experience, thus preparing students to undertake restoration or the creation of mosaics of any period and art style – from Byzantine and Roman to modern styles. Short hobby courses are also available. Over the decades, the SMF has undertaken important commissions such as the vault of the church of the St. Sepulchre in Jerusalem.

The basic material used by the students is the tessere – fragments of stones, marble or glass cut with a specific small hammer – but over the years materials of all types have been added to the media used, like shells, nails and screws, fabric, thread and rope, paper and wood, buttons.

A visit to the SMF reveals not only mosaic pieces created over the decades but also those designed and created by students who have just completed the academic year. For instance, in the first-year classroom there are always on display relatively ‘simple’ small mosaics made by each student – say, a bird or a bunch of grapes. The increasing technical proficiency of the students is easily seen when going through the second-year classroom and even more in the third year’s classroom. The mosaics created by the students as final-year tests are indeed awesome, revealing both their personality and the technical skills mastered.

While viewing the paintings and sculptures reproduced as mosaics, one draws the conclusion that mosaic itself is a medium capable of creating works of art and not only copies of works of art. One such example is arguably Michelangelo’s Pietà which, hanging on a wall at the end of a corridor, seen from a distance gives the impression of a three-dimensional work.

The building itself features wonderful mosaics on walls and floors, as in the original foyer. Each stair in the internal staircase has a different design. Even the bathrooms are decorated!

The courtyard is embellished with bright mosaic pieces. One of these is a set of trees in which a little dog lifts its hind paw against a tree.

Of the reproductions of famous artworks, I have chosen Michelangelo’s La Sacra Famiglia and Caravaggio’s Still life.

Then there are numerous portraits, mainly created by students in their second year. Here is the set created in 2015. The portrait of a little girl, with a bright and smiling face [Fig. 8] is among my favourites.

Some of the artworks are sculptures, as this one [Fig. 9] that suggests movement in the leaves which are encrusted with colourful vitreous tessere. Even more impressive is the way tessere sfumate hint at movement, as can be seen in the small dog waving its tail and the woman’s skirt moving in sync.

The inspiration for the design of many of the mosaics, on the other hand, is clearly geometry.

The unusual materials and novel compositions, springing from the boundless imagination of students and teachers, never cease to excite and intrigue the visitor. Here are two such examples – the first features nails while the second small paper cylinders.

There is a strong connection between the SMF and Australia. First, you will find Australian-themed mosaics within the SMF – the reproduction of Aboriginal art and the depiction of a feisty sulphur-crested cockatoo. Secondly, dozens if not hundreds of mosaics have been created in Australia by graduates of the SMF. I’ll only mention two of them: Aldo Rossi who not only worked on the vault of the Hall of Memory in the War Memorial in 1957 but also on the installation of the Aboriginal mosaic (designed by Jagamara) in the forecourt of Parliament House in the eighties; and Pietro Melocco who laid the amazing mosaic floor of the crypt of St. Marys cathedral in Sydney.

I will end with a photo of myself near the mosaic titled Agnus Dei to give an idea of its size – 2.5m in diameter. This large mosaic was discovered in 2012 by chance when SMF teachers found it behind a ‘false’ wall. Made in 1929, the magnificent mosaic had been hidden possibly as a precaution, before World War II. The documents relating to its existence and location had subsequently been misplaced.

Should you ever decide to visit Friuli, try to include Spilimbergo in your itinerary and visit this extraordinary art gallery. You won’t regret it. Entry is only 2 euros. Check opening hours on the site www.scuolamosaicistifriuli.it or ring the office on +39 0427 2077.