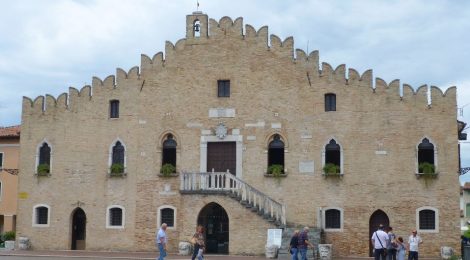 On 27 February I gave a presentation to our members on this topic. I used 36 images most of which were photos taken by me of projects undertaken by Aldo during his life, or of places he remembered from his childhood that I had the pleasure to visit on his behalf.

Why had I become interested in this topic? Since moving to Canberra in the ‘80s I had loved Parliament House: its elegant, classical style; the quality of its materials; its beautifully designed gardens; its extensive arts and crafts collection; and the fact that the building had been designed by an Italian and constructed in large part by Italian companies and tradesmen.

In 2013 as Parliament House’s 25th anniversary was being celebrated, I sought an interview with Aldo for an article I wished to write for La Fiamma on the Italian architect who had designed it. The article was published on 24 June. I brought him a copy and he was pleased with it. After that second meeting, I saw him 64 more times right up to four days before his death. We always spoke Italian. 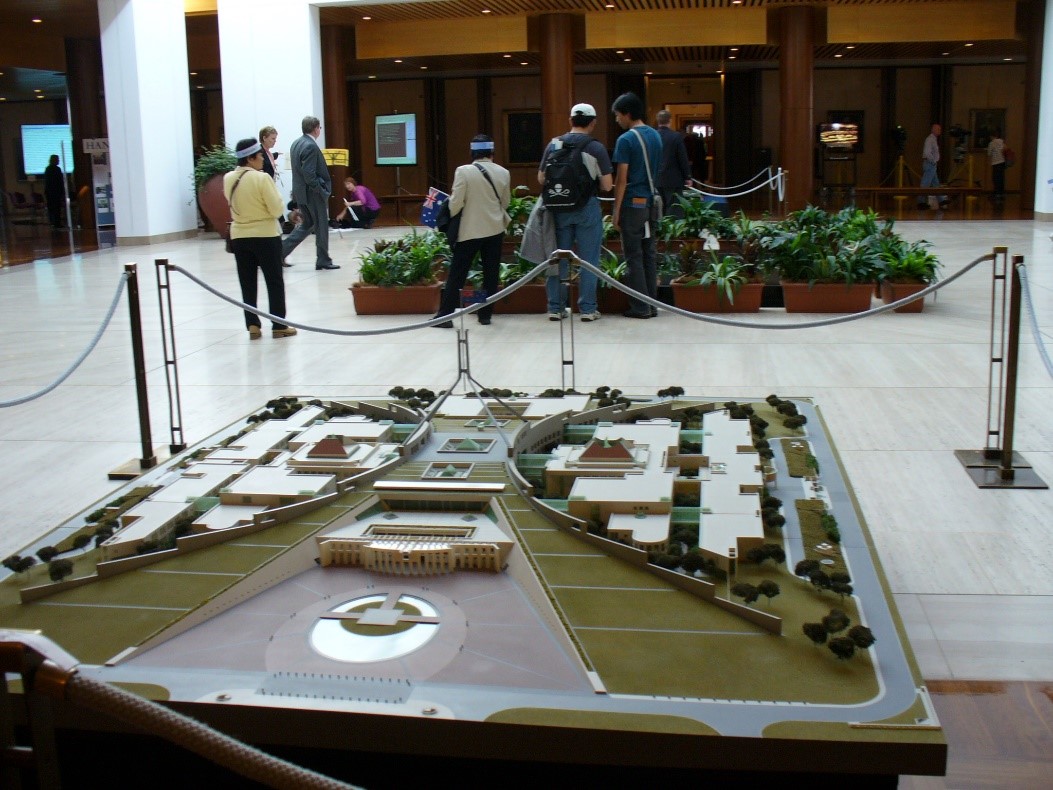 The miniature of the Parliament

Romaldo (called Aldo by his friends and family) Giurgola was born in Rome in September 1920. His father – an artist and set designer – was from Galatina (Puglia) and his mother from Portogruaro (Veneto), a quaint medieval town. In his childhood he would visit the maternal grandparents for the summer holidays. He remembered his grandparents and particular places in the town very clearly.

He attended schools and university in Rome, graduating as architect from La Sapienza. In the immediate post-war period he was involved in designing public housing but after being discovered by the Americans he left Italy on a Fulbright scholarship to gain a Master’s at Columbia University. He settled in the US where he worked for thirty years until his entry for the design of the Australian Parliament House (one of 329 international submissions) was selected in 1980. He then moved the Canberra to oversight its construction, fell in love with the city and remained there till his death in May 2016.

Aldo was drawn to architecture from an early age, being struck by specific buildings including the medieval town hall of Portogruaro. In Rome he had found ‘perfectly natural’ the proximity of buildings such as the Trojan Column (2nd c.), Palazzo Venezia (15th c.) and Michelangelo’s symmetrical Piazza del Campidoglio (16th c.).

While working in the US, Aldo designed buildings of all sizes and purposes for US and international clients. Among these are three schools for Friuli (my native region) funded by the Americans to help with the region’s reconstruction following a major earthquake in 1976. During my 2014 summer holiday in Friuli I visited two of these schools and took several photos to show Aldo. He was particularly fond of the Aviano primary school. Both schools displayed architectural features similar to those of PH.

The friendship I formed with Aldo in the last three years of his life served to reignite an interest in his Italian roots, in our language and literature, art, music and culture. During my visits he often relived snippets of his childhood in Rome and vacations at Portogruaro, and enjoyed looking at the photos I brought from Italy after my summer holidays there, especially those of Portogruaro and of the two Friuli schools. He joined the Dante Society, assiduously reading our newsletter and even attending a cultural presentation on Fellini. He expressed an interest in re-reading The Divine Comedy. He enjoyed listening to a Dante Musica Viva choir CD which included songs he recognised including one (La bella Gigogin) his mother used to sing. These recollections brought smiles to his face. In January 2014 I took him to the residence of Italian ambassador Pier Francesco Zazo – both had expressed an interest in meeting each other. They enjoyed the encounter, the exchange of ideas and the opportunity to talk about Rome.

Aldo has been described in similar terms by all those who knew him. In the official portrait now found at the National Portrait Gallery, artist Mandy Martin wanted to depict “a man of humility who has truly served humanity” (Note that in this portrait a snow-peaked mountain of Friuli features in the background). At his funeral service, the Catholic priest who had become a friend of Aldo as they worked together on the church’s design, described him as ‘a great man, a thorough gentleman, good, kind, loving and gentle – a delight to be with’. In my own 2013 article I had described him as “an extraordinary architect, an artist, a humble man and a gentleman.”

Focussing on his work, then University of Canberra’s Vice-Chance 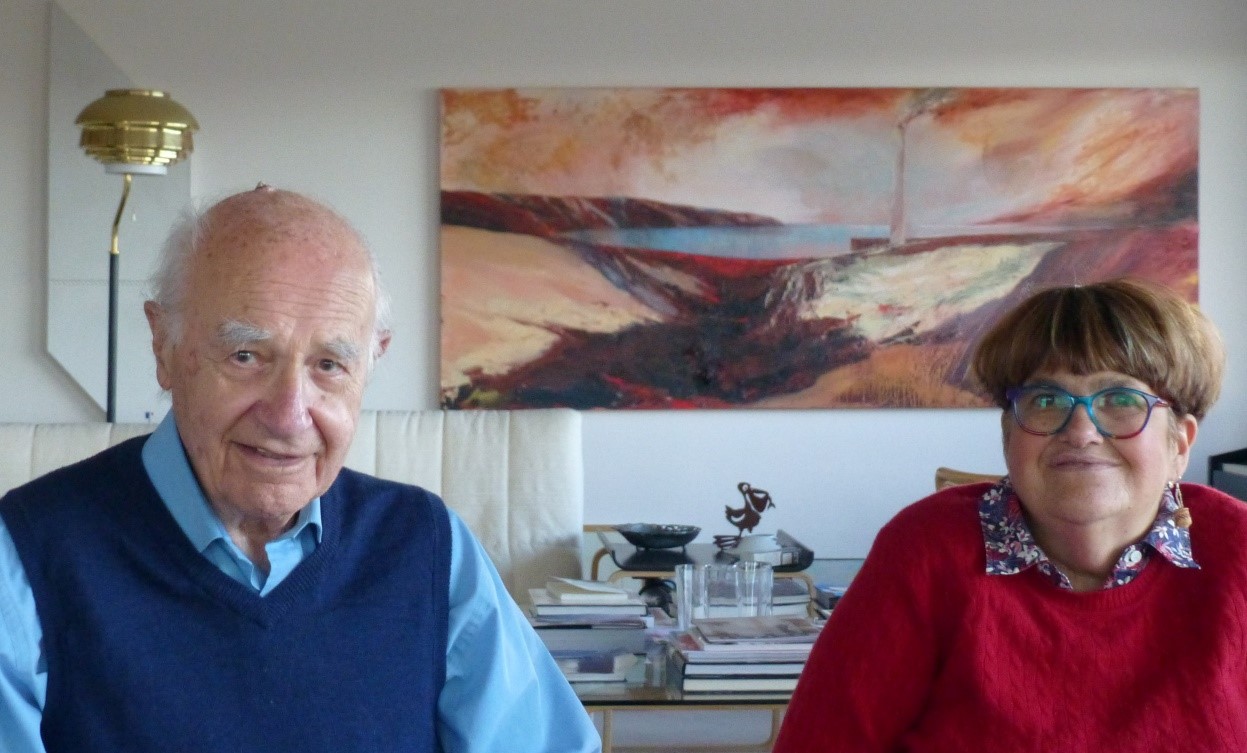 Aldo Giurgola and his daughter, 2014

llor Don Aitken, in awarding an honorary doctorate to Aldo in 1997, concluded his speech with these words: “There is a rightness about his work that compels respect”, and in 2013 Julia Gillard, then Prime Minister, in marking the 25th anniversary of Parliament House stated, inter alia “Our nation has been blessed with a monumental building of grace, a building of character and of quality and a place that will endure. […] In this masterpiece his [Walter Burley Griffin’s] vision [for a structure that would be the foremost building of the Commonwealth] for our nation’s capital has been triumphantly realised. It was […] the work of Romaldo Giurgola, one of the post-war era’s finest architects, and this is his finest work.”

Aldo was a great Italian of whom all Italians can be extremely proud.