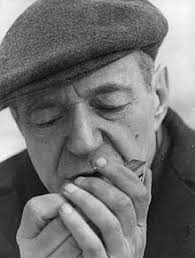 Umberto Saba was born in 1883 in Austro-Hungarian Trieste. He engaged in various types of employment, including writing for Mussolini’s newspaper Il popolo d’Italia in 1915. A few years later he bought an antiquarian bookshop in Trieste and that’s where he spent much of his life, living his passion for rare old books and composing his poetry and prose. However, with a Jewish mother, he had to frequently move around Italy in hiding, to escape the fascist regime. He suffered from depression for much of his adult life as had one of the poets who inspired him, Giacomo Leopardi. He became addicted to prescribed opium, and died in Gorizia in 1957. He had published several literary works between 1911 and 1953. In 1946 he was awarded the Viareggio Prize and in 1953 he received an honorary doctorate from the University of Rome.

seduto del ritorno a mezza via,

Here is the translation found in Umberto Saba : poetry and prose – selected and translated by Vincent Moleta

This bread has the taste of a memory, / eaten in this working-class tavern, / where the port is at its most run-down and congested.

Yet I enjoy the bitterness of the beer, / when I sit down midway on the journey home, / facing now the cloud-covered mountains, now the lighthouse.

My soul, which has vanquished one of its sufferings, / on this ancient evening looks with new eyes / at a pilot and his pregnant wife;

and at a boat whose old timber / glistens in the sun, with a funnel / as tall as the two masts; it is a child’s

drawing , one I did some twenty years ago. / And who would have told me that my life / is so beautiful, with such sweet anguish,

And with such lonely bliss!