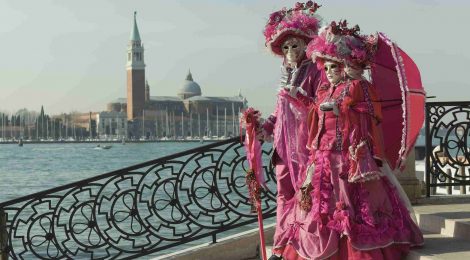 Italy celebrates Carnevale with a huge winter festival marked by parades, masquerade balls, entertainment, music and parties.  Children throw confetti at each other or coriandoli and sometimes flour and raw eggs.  Mischief and pranks are common during this festival, hence the saying “A Carnevale ogni scherzo vale” (At Carnevale every prank is allowed). 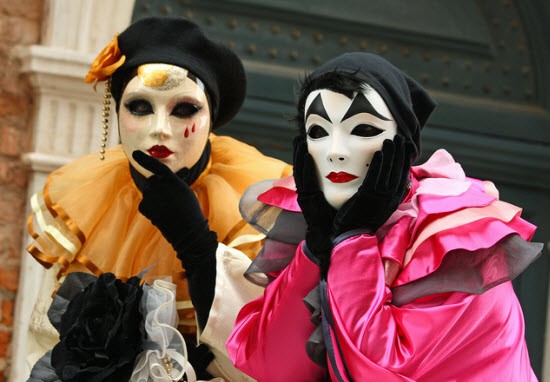 Carnevale was first celebrated in Venice in 1094 and later spread throughout the various regions in Italy and all over Europe.  Carnevale has roots in pagan festivals and traditions and it was adapted to fit into the Catholic rituals.  Although Carnevale is actually one day, which is Martedi Grasso or Mardi Gras or Shrove Tuesday, the celebrations and parties all over Italy may begin a couple of weeks earlier.

Masks or maschere, and costumes or costumi are an important part of Carnevale and they became a key feature of Carnevale during the Renaissance.  The masquerade balls were introduced by Pope Paul II in the 15th century and gained approval especially thanks to the popularity of the characters of the Commedia dell’Arte.  These characters are at the origin of many of the most popular Italian masks of Carnevale, like Arlecchino, Pantalone and Pulcinella.  These traditional masks brought on stage human stereotyped characteristics like greed, vanity and cunning.

The etymology or derivation of the word Carnevale has been the subject of discussions but the majority of experts agree that Carnevale is an Italian word derived from the Latin carnem (meat) and levare (remove).  Traditionally, Carnevale was the last day where it was allowed to eat meat and other animal products like butter and eggs.  The following day is Ash Wednesday which is the beginning of Lent; the period of 40 days before Easter during which no meat was eaten.

Carnevale is celebrated all over Italy in the various regions, but the most famous is in Venice, which holds the biggest and most elaborate festival.  Events and entertainment are held nightly throughout Venice with people in costumes around the city.  The main events are in Piazza San Marco.  There are masquerade balls, parades on the Canal Grande (Grand Canal), a special Carnevale for children and fireworks.  This year Carnevale or Martedì Grasso will be on March 5.

In Viareggio on the Tuscany coast, there is one of the biggest Carnevale celebrations.  It is known for its giant allegorical paper maché (carta pesta) floats.