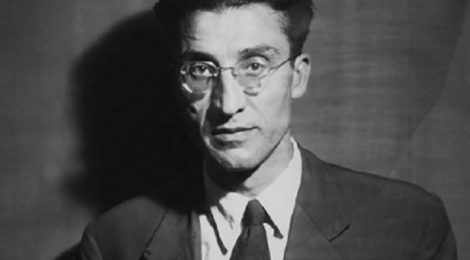 Poet and novelist Cesare Pavese (1908–1950) lived and worked for most of his life in Turin. He learnt English and became very interested in American literature. He taught English and translated several major works from English into Italian (including Moby Dick and David Copperfield). He wrote poetry as well as fiction and is regarded as one of the most significant Italian intellectuals of the twentieth century. The fascist regime accused him of anti-fascist activities and exiled him to Calabria for a year. He also endured the early death of his father and of many of his close friends. These losses and failed relationships with women contributed to the depression from which he suffered throughout his life and which led to his suicide at the age of 42. His poetry did not follow the prevailing hermetic style, but evolved from telling stories about the protagonists to using images and symbolism.

The poem included here is part of the homonymous collection and is inspired by American actress Constance Dowling, an actress he met and fell in love with but who did not reciprocate his feelings. If you wish to hear the poem read by the great Italian actor Vittorio Gassman, click here https://www.youtube.com/watch?v=MDtaE0Cbayo

When Death Comes, It Will Have Your Eyes

When death comes, it will have your eyes – / this death that is always with us, / from morning till evening, sleepless, / deaf, like an old remorse / or some senseless bad habit. Your eyes / will be a pointless word, / a stifled scream, a silence; / the way they appear to you each morning, / when you lean over, alone, / into the mirror. Sweet hope, / that day we too shall know / that you are life and you are nothingness.

For each of us, death has a face. / When death comes, it will have your eyes. / It will be like quitting some bad habit, / like seeing a dead face / resurface out of the mirror, / like listening to shut lips. / We’ll go down into the vortex in silence.

← Carnevale in Italy
Aperitivo Italiano – an event for the younger generation! →