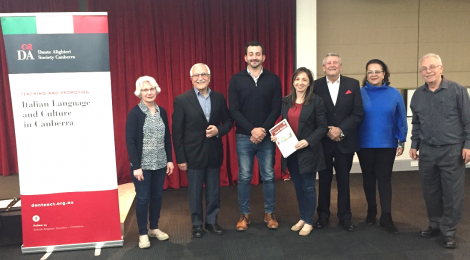 Members of the Dante Alighieri Society Canberra met at the Dante Alighieri Society Annual General Meeting held on 29 October 2020 at the Theo Notaras Multicultural Centre. The meeting had been postponed from April due to COVID 19 restrictions. The meeting was chaired by Franco Papandrea, President of the Society, who presented a report of the Society’s 2019 activities as well as key developments for 2020. (See President’s Report in this edition). Secretary Sam Palma presented the minutes of the last meeting which were approved by the meeting. Also, Treasurer, Tony Hanrahan presented financial reports for the Society. The President’s report highlights what was a successful year for the Society. Among key points of the report are the planned initiative to support teaching of Italian in schools in the coming year and the finalisation of a new strategic plan for the Society. A draft of the plan provided to those attending the AGM sets out the vision of the society, its mission, values, and its primary fields of endeavour which would be: establishing an integrated program for teaching Italian which would encompass school level and adult education, and be based on the Common European Framework for Languages; implementing a communication strategy to expand the Society’s outreach; and integrating the delivery of the society’s language and cultural services. The strategic plan is published in full in this edition of the Dante Review and all members are invited to provide comments and feedback to the Committee. Tony Hanrahan, the society’s Treasurer, presented both the audited financial reports for the Dante Alighieri Society Canberra and the DAS Canberra Foundation. The latter was established to provide financial support to DAS Canberra and remains a reserve for the activities of DAS. The audited financial reports were for the 2019 year, and so before the effects of COVID. The society was in a healthy financial state, although a small loss arose in 2019 due to deferral of expenditure from a grant received late in 2018. Mr Hanrahan noted that the COVID lockdown has led to a heightened interest in language learning and that this has been reflected in the society’s bank balance which is now the healthiest he has ever seen it.

The President thanked Luigi Catizone, Pamela Perrusich and Catherine Pellegrino, who were stepping down from their service on the DAS Canberra Committee. All three will continue their other roles with the Society (Luigi, as editor of the Dante Review and Pamela and Catherine as members of the Diavoletti Sub-Committee). The chair and meeting warmly acknowledged their contribution, and that of all the other members of the committee to the management of the Society. Continuing members of the Committee were reelected unopposed. These are Franco Papandrea (President), Alessandro Merola and Cathy Perre (Vice Presidents), Tony Hanrahan (Treasurer), Sam Palma (Secretary), and committee members and Julie Docker; Fariba Imani, previously co-opted to the Committee, and Anne-Marie Hogan were also elected. The meeting expressed its thanks to the DAS Committee for its service to the Society over the past year.