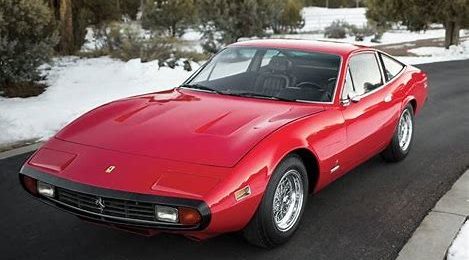 Notwithstanding its rarity Canberra’s annual display of Italian exotica Auto Italia has been fortunate to have been able to attract a Ferrari 365 GTC/4 on more than one occasion in the past.

The car, which was quite famous even at the time of production, was based on the chassis of the even more famous Ferrari 365 GTB/4 “Daytona”.

In the very short two-year production run only 505 examples of the GTC/4 were produced.

However, its chassis and drivetrain, were derived mostly unaltered (except for  wheelbase stretch to provide additional rear seat room) on its successor, the 1972 365 GT4 2+2.

The GTC/4’s coupé bodywork by Pininfarina contained two front and two rear seats – comparatively rare for a sports car manufacturer such as Ferrari – as on the 365 GT 2+2 it replaced.

The rear seats were small and the sloping rear window limited rear headroom, so it can also be seen to trace to the two-seat 365 GTC that had been discontinued in 1970.

With its wedge shape, fastback silhouette, sharp creases and hidden headlamps the GTC/4’s styling clearly reflects the 365 GTB/4 “Daytona” it was based on.

Power steering, electric windows and air conditioning were standard. The cabin was furnished in mixed leather and tartan fabric, unique to this model and unusual for a Ferrari.  That said full leather upholstery an option.

The 365 GTC/4 shared the chassis and engine block as the 365 GTB/4 Daytona, riding on the same wheelbase and suspension. Many changes were made to make it a more comfortable grand tourer than its two-seat predecessor and sibling. These included softer spring rate and a hydraulic power steering.

The chassis was a tubular spaceframe, mated to a steel body with aluminum doors and bonnets; as was customary in this period, the bodies were made and finished by Pininfarina in Turin, then sent to Ferrari in Modena for the assembly. The suspension system used transverse A-arms, coil springs coaxial with the shock absorbers (double at the rear), and anti-roll bars on all four corners. Wheels were cast magnesium on Rudge knock-off hubs, while Borrani wire wheels were optional; the braking system used vented discs front and rear.

The engine was a Tipo F 101 AC 000 Colombo V12, displacing 4,390 cc (4.4 L; 267.9 cu in).  The engine and cylinder heads were aluminum alloy, with cast iron pressed-in sleeves; chain-driven two overhead camshafts per bank (four in total, as noted by the “4” in the model designation) commanded two valves per cylinder.

The V12 was detuned to 340 PS (250 kW; 335 bhp) from the Daytona, to provide a more manageable response suited to a GT-oriented Ferrari. In place of the Daytona’s downdraft setup, six twin-choke side-draft Weber carburetors were used, whose lower profile made possible the car’s lower and sloping hood line.

The 5-speed all-synchronized manual transmission was bolted to the engine, another difference from the Daytona which used a transaxle. However, the setback placement of the engine and transmission still allowed the car to achieve a near perfect 51:49 weight distribution. The gearbox was rigidly connected to the alloy housing of the rear differential through a torque tube.

This year Auto Italia will be held on 7 April at Exhibition park in Canberra (EPIC).  The Organisers, who will again be sponsoring CanTeen, expect a very strong turnout of Italian machinery but in particular cars from the Ferrari Club of Australia. Hopefully a 365 GTC 4!