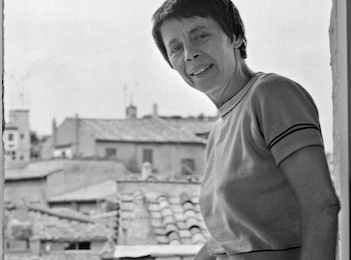 Amelia Rosselli was born in Paris in 1930. Her parents were political activists and her father was an anti-fascist who was killed by the regime in 1937. She was brought up in France, England and the US but settled in Italy in 1949. She studied piano and music composition. She wrote experimental poetry and prose mostly in Italian but also in English, French and Italian. In 1964, encouraged by the great literary figure Pier Paolo Pasolini, she published her first collection of poems – Variazioni belliche (War variations). Several other poetry collections followed.

Her life was marred by bouts of serious depression, and time spent in mental clinics and being treated by psychiatrists. Some have argued there is a link between her poetry and her mental illness; in any case she is generally regarded as “one of the most original, powerful, and baffling voices in contemporary Italian poetry”. (Twentieth-Century Italian Poetry – An Anthology – ed. by John Picchione and Lawrence R. Smith)

She lived in isolation and committed suicide in 1996 while living in an apartment near Piazza Navona.

They seem to be tiny insects celebrating / a swarm of shrill motors, a / pain split into difficult attentions / and a gathering of daring actions.

Snow outside; and all this resembles / a youthful crisis of tears if / it weren’t for the fact that now the tears are dry / as the snow.