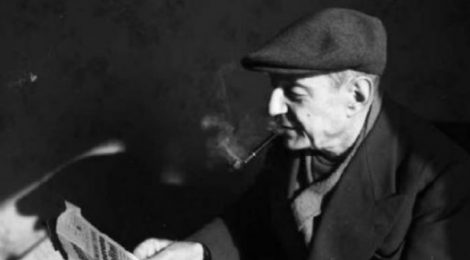 Umberto Saba is the nom the plume of Umberto Poli, a poet and novelist born in Trieste in 1883 of a Jewish mother who raised him in the Jewish faith – his Catholic father being completely absent from his life. From the age of 20 Saba suffered from depression, even undergoing treatment for addiction to medically-prescribed opium. In the first half of his life he worked at odd jobs until, in 1919, he bought an antiquarian bookshop in Trieste which gave him sufficient income to maintain his family and through which he developed a passion for rare old books. His poetry collection – Canzoniere – was published in 1922.

Italy’s race laws introduced in the second world war impelled him to leave Trieste for Florence where, with the family, he moved repeatedly to avoid deportation. He later returned to Trieste. In 1946 he was awarded the Viareggio Prize; in 1953 he was given an honorary doctorate by the University of Rome and then received an award from the Lincean Academy. He died at Gorizia in 1957.

The following poem is found in the 2004 anthology Umberto Saba – Poetry and Prose, with works selected and translated by Vincent Moleta.

My companion speaks at length with me / of sad, grievous matters that weigh / on the heart like a stone; a hopelessly tangled /mesh of troubles, that no / hand, much less mine, can unravel. / A sparrow / rests for a  moment on the guttering / of the house opposite, glows in the sun, then flies back / into the azure sky that arches over it. / Oh, it / is blessed of all the blessed! It has wings, and it has no idea / of my secret pain, the suffering / of a man who has reached a frontier: has arrived at the certainty / of not being able to help someone who loves himself.