Browse: Home   /   LNGS: something all Italians can be proud of! 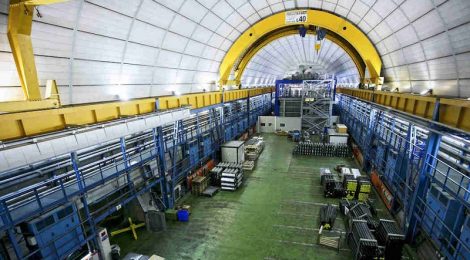 LNGS: something all Italians can be proud of!

The videoconference via Skype that took place on 23 March at the Italian Embassy was an example of collaboration between the Dante and the Italian Embassy. It was well publicised and drew a large audience, mainly Italians. Even Ambassador Pier Francesco Zazo, due to leave Australia the following day, attended the presentation, together with our president Franco Papandrea, the new Science Attaché Anna Maria Fioretti and the Director of Culture at the Embassy Anna Rita Tamponi who hosted the event, welcoming guests and speakers.

In his introductory remarks Ambassador Zazo, who has a “particular interest in science” stressed the importance of bilateral collaboration in this field especially in particle physics and astronomy, adding that Italy is also “interested in partnering with Australia on the establishment of the Space Agency”. 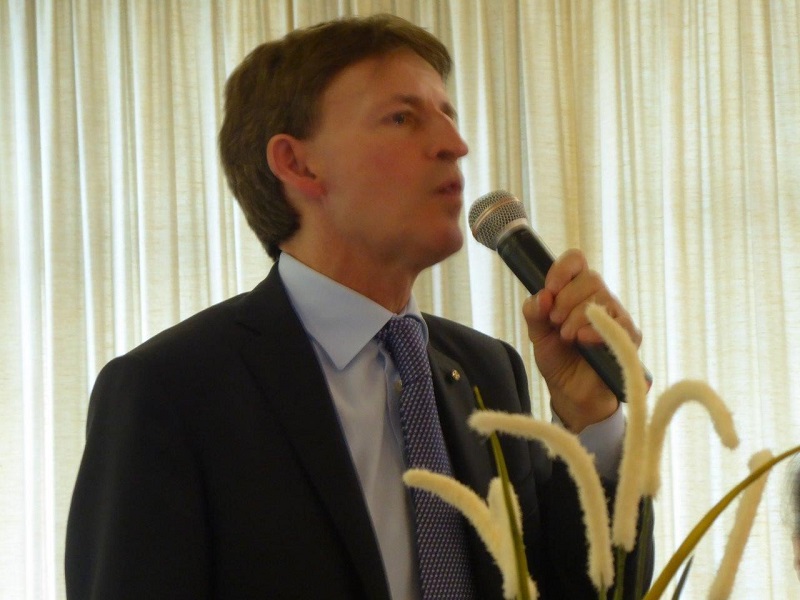 Franco Papandrea pointed out that the videoconference is the fourth organised by DAS “on notable Italians or notable institutions”, and thanked Luigi Catizone for this initiative.

As Anna Rita Tamponi explained, the Gran Sasso National Laboratory (GSNL) is a centre of excellence for research into particle physics, attracting scientists from all over the world including Australia.

The Skype connection with the three Italian scientists at GSNL (Chiara Vignoli, Nicola Rossi and Simone Copello) was managed throughout the evening by Anna Maria Fioretti who stressed not only the unique scientific relevance of this laboratory for the international community of scientists, but also the excellence of the infrastructure itself that represents one of the best examples of Italy’s know-how in the construction of major infrastructure projects such as dams, bridges and tunnels.

The presentation included the viewing of a documentary on the realisation of the GSNL that illustrated the extraordinary technical challenges that had to be overcome in its construction. 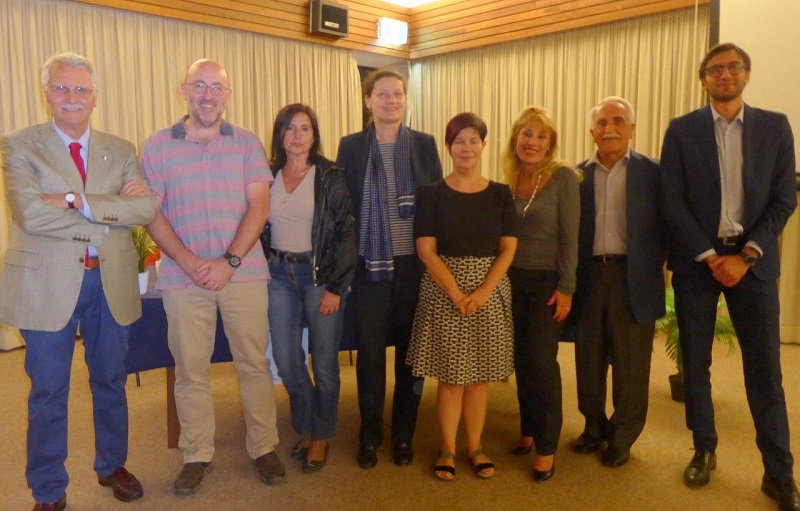 Chiara Vignoli – who had worked with Nobel prize-winner Carlo Rubbia – gave us a virtual tour of the laboratory. Built inside the mountain some 120 km from Rome, it has a surface of 17,800 m2 and three big halls plus many tunnels and external support facilities. Completed in 1987, it is currently the biggest operational underground laboratory in the world. Of the 981 scientists using the GSNL at the moment, only 43% are Italian. With 20 experiments underway, these users undertake research into a range of fields including dark matter, neutrinos and nuclear astrophysics (“from the infinitely small natural constituents of matter to the infinitely large” as Chiara pointed out) in an environment of ‘cosmic silence’ ie with no interference from cosmic rays or natural radioactivity. The laboratory is equipped with high tech and sensitive detectors, and is also safe from seismic events.

Nicola Rossi talked about neutrinos (which are “neutral subatomic particles with a mass close to zero and which rarely react with normal matter”). “The sun is the biggest source of neutrinos – we are showered by neutrinos every day” he explained. Current experiments at the laboratory focus on nuclear fusion and supernovae. “We are waiting for a supernova explosion, which only lasts 20 seconds and which is a rare event – only two or three per century!”

Simone Copello briefly described dark matter and the experiments currently taking place at the GSNL. “Dark matter must be dark, is extremely elusive and stable” he stated.

After this erudite but rather technical presentation from Italy, we enjoyed three briefer and somewhat more accessible presentations by local scientists.

Gregory Lane is Senior Fellow at the Department of Nuclear Physics of ANU and is responsible for the technical side of the so-called SABRE (Sodium-iodide with Active Background Rejection) experiment designed to search for galactic dark matter. SABRE is a dual experiment, run at the same time in Australia and at the GSNL. He showed that special parts for the detectors used in the experiment are prepared in Canberra where there is a group of scientists that use the Italian laboratory to carry out their research.

Elisabetta Barberio is Chief Investigator at the Centre for Excellence in Particle Physics at the Terascale and senior academic at the University of Melbourne. She is also involved in long-standing research cooperation on dark matter with the GSNL. “Most of the stuff in the universe is ‘dark’ – unknown”, she advised us. Elisabetta then told us that she is keen to build an underground laboratory at Stawell in a disused gold mine, and then team up with GSNL. The old mine is 250 km from Melbourne and a laboratory could be built 1025m deep, accessible through an existing road. Elisabetta is working hard to obtain in-principle approval and funding for the ambitious project.

Lilia Ferrario is Associate Professor and Associate Director in Education at the Mathematical Sciences Institute of ANU. She is a theoretical physicist – she is not involved in any experiment and has no equipment. She is interested in dead stars. “When stars reach the end of their life, they explode”, she explained. Cannibal stars explode too “when they eat too much, ie other stars”. Lilia’s dream is to detect a supernova event which, as we had heard, is an extremely rare phenomenon.

The evening of science ended with refreshments during which some of us admitted that much of the presentation was rather technical and beyond our ability to understand. Nevertheless, we now know that a world-class research laboratory exists deep in Abruzzo’s Gran Sasso and that top researchers from all over the world undertake ground-breaking physics research there. Something all Italians can be proud of!