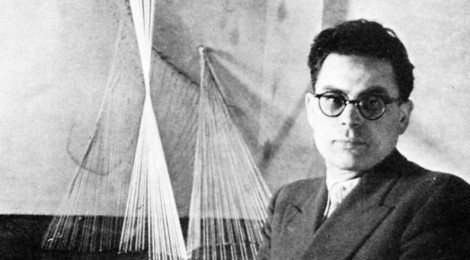 Leonardo Sinisgalli (1908-1981) was born at Montemurro in Lucania and is buried there. He graduated in engineering and had the opportunity to join Enrico Fermi in conducting nuclear research but instead changed direction completely, opting for poetry and painting. Aged only 17, he met the great poet Ungaretti in Rome and published his first poetry collection in 1936. Some of his poems were also published beside those of the great poets Montale and Quasimodo in the Mondadori series Lo specchio.

Sinisgalli worked in graphic arts and advertising for large companies like Olivetti and Pirelli. He held solo art exhibitions for his works (portraits, drawings and etchings) in ink and pastels. He won several literary prizes for his poetry. Throughout his life he remained very close to his mother, as the first of these two short poems shows.

Warm as I was in your womb,
I cling to your loins,
dear mother. I am
your fruit and I return to you
every night and at the hour of death.
We’ll sleep like we did once
the soles of my feet
pressed against your heart.

The friend I betrayed

The friend I betrayed calls me
from deep in my heart, comes near.
I hear him climbing in my sleep.
At the last footfall I scream
That he step on me.
Then he sleeps light on my chest.