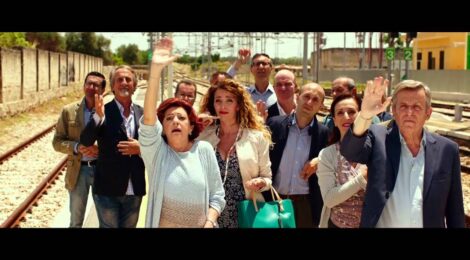 Quo Vado? – Where Am I Going? Film Review

‘Quo Vado?’ (2016), is a comedy directed by Gennaro Nunziante, the screenplay was co-written with the actor Luca Pasquale Medici, who also wrote the music, and whose art name is Checco Zalone. The film was chosen as part of the series of film events organised between the Dante Alighieri Society and ANU Italian Studies at the Australian National University, and was held recently in the Lecture Theatre of the Hedley Bull Centre. The near capacity audience was welcomed by the Convenor of Italian at the ANU, Dr Joshua Brown.

‘Quo Vado’ was extraordinarily popular with audiences in Spain, Australia and Argentina, Uruguay and Russia, and, in particular, it became  the most popular of recent Italian films, with EUR 65.3 million being  the highest grossing Italian film of all time, surpassing Roberto Benigni’s ‘Life is Beautiful’, “La vita è bella”, of 1997.

I would like to give a quick summary of the comedy and then to explore whether the basis of this film’s success can be related to the Italian comic tradition of the ‘maschera’ in the Commedia dell’Arte.

‘Quo vado’ opens with the child Checco who at around eight years of age has only one desire in life, to become an Italian public servant: his favorite game is to pretend he is stamping receipts and letters and thus he is  preparing himself for the outrageously cushy Italian public service job for life, ‘il posto fisso’. Once  his dream is realized as an adult, he unashamedly boasts to all of arriving at work at 11.30 in the morning, receiving  an extra month’s salary to go on holiday (la tredicesima), to name only two perks.

But Checco did not allow for the entry into government of a new party which has adopted stringent  efficiency measures to reduce the size of the Public Service, and Checco, not being married (and still living at home at 39 years old!) is immediately chosen to be in the first cut. Naturally, as a ‘pure’ public servant, he refuses to accept any  generous payout, and to put pressure on him he is given outrageous positions such as being sent to work as an overseer at a private Mafia Zoo, to a job organizing refugees in Lampedusa, and then as hunter to protect a very attractive Italian scientist, Valeria Nobili, (Eleonora Giovanardi), whose job is to take blood tests from polar bears in the Arctic. But Checco, tired as he is, pops up smiling in everything he does, even refusing to accept ever higher high termination packages. The abject government minister (Ninni Bruschetta) goes bonkers!

Jesus’s moral question, ‘Quo vadis?’ Where are you going? becomes a moral question  for Checco as,  ‘Quo vado?’ meaning,  ‘Where am I going?’ when he is put on trial by an African tribal leader and his tribe who judge Checco’s moral worth. Of course, Checco  fails and risks condemnation to death, until he discloses that he will give as a gift to the African leader his very high public service payout and, having left his posto fisso, he intends to be a caring husband to Valeria and their baby, and move to the highly moral  eco-friendly Norway.

And ‘Quo vado?’ is truly very funny!  Which leads me to ask the question: from what comic tradition does Checco get his deep comic power?  I believe that it comes from the Italian Renaissance comic form of the Commedia dell’Arte, when real comic masks were worn by the actors.  Checco wears a ‘mask’ even if it is not a physical one, that of a kind of a simpleton with no self awareness whose maschera is the perfect public servant who functions to always reveal its absurdities. Checco resembles the famous comic maschera of the Commedia dell’Arte, Pulcinella, of  southern Italy, who creates chaos and confusion wherever he goes, he always avoids responsibility, and yet always ends up with more than he bargained for, as, for example, when in the Arctic he is asked to shoot a polar bear to put it to sleep. Moreover, his comic power functions to reveal the secrets of the Italian Public Service, but, paradoxically, Italian audiences recognize them perfectly, they are not secret at all! So we laugh even more! In addition, the structure of the film unfolds in a lively succession of separate scenes designed to make the audience laugh, which resembles perfectly the construction of comic scenes, called lazzi, of the Commedia dell’Arte.

Gennaro Nunziante, and the actor Luca Pasquale Medici, as Checco, have created a brilliant comedy of fine moral stature. I would like to suggest they have harnessed their comedy to the deep Italian historical theatrical roots of the Commedia dell’Arte, and by so doing have succeeded in their desire to give great pleasure to audiences.