The truth of fiction

On 2 November 2017, our cultural presentation was a talk by Joseph Falsone. Joseph is the Director of the Ainslie and Gorman Art Centres. He graduated in Art History and Literature from the University of Sydney, specialising in twentieth-century Italian poetry, and then pursued his studies at the Università degli Studi di Firenze. The subject of his talk was the Neapolitan novels of Elena Ferrante. 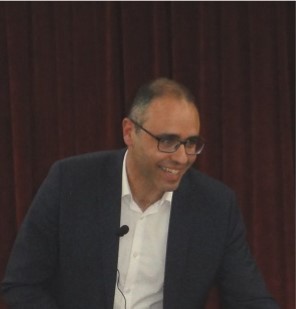 These four books are bestsellers in Italy and throughout the world. They focus on the friendship of two women – the narrator, Elena Greco, and her friend Lila – from their childhood together in a poor and violent neighbourhood of Naples in the 1950s, through the following six decades.

Elena Ferrante has stated that she considers the four books to be a single novel, which was published serially for reasons of length. In fact they contain in total over 1600 pages. Which makes it all the more admirable that Joseph agreed to give a talk on them, at the request of Yvette Devlin in June, even though at the time he had not yet read them!

Joseph said he approached them as an amateur, not as an academic. Most of the narrative is concerned with describing events, and working out who did what and why. The books are verbal, not visual, though the few visual descriptions are very effective.

Reading them, he did not have a satisfying sense of structure; it was like a lived experience. The richness of events hardly left time for reflection. Mysteries in the book remain unresolved at the end. The final resolution is acceptance that there is no resolution.

The books revolve around eight or so families in a poor rione in Naples. Some leave, some stay, but their stories recur throughout. The central figures, Lila and Elena, grow up in a violent world. Both are highly intelligent, but Elena has the opportunity to study and Lila does not. Their paths diverge, but they are held together by a force that neither understands. It is the most intense relationship in the book. Relationships with men come and go, and the male characters are a pretty pathetic lot, either violent or irresponsible.

Why talk about these books? First, it is rare for contemporary Italian novels to become international bestsellers. Also they give a slice of Italian history during a period of dramatic change, from the 1950s to 2010, a time of violence and conflict, of increasing prosperity, but decreasing social cohesion.

The books were translated into English very rapidly – perhaps too rapidly, Joseph suggested. The translation is “workmanlike”. Joseph made some interesting observations about the way the English-language versions are presented differently from the Italian. He pointed out that the cover designs give very different impressions.

The Italian covers are pastel coloured. (They are outdoor scenes with a feminine feel – two little girls, lovers, a wedding couple, a mother and child.) The English publications have predominantly black covers, which hint at exoticism and violence, as does the collective title “The Neapolitan Novels”, which is used by the publishers for the English, not the Italian, version.

There are also small, but significant, differences in the titles. “My brilliant friend” implies that it is the narrator’s friend, Lila, who is brilliant. The Italian title “L’amica geniale” leaves it unspecified which of the two friends is “geniale”.

In fact, Lila describes Elena as her “amica geniale” and throughout there is a binary system in the book, each being arguably the “amica geniale” of the other. The English title of the second book refers only to a “new name”, while the Italian makes clear that it is a new surname, acquired by a woman on marriage. In the title of the third book, the Italian “chi fugge” – “who flees” – is much stronger than the English translation “who leave”.

One of the best-known facts about the novels is that “Elena Ferrante” is a pseudonym. The author insists on remaining anonymous, giving “interviews” only in writing.

Does the concealed identity matter? Some people think that an author has an obligation to be known, and various theories have been advanced about the identity of Elena Ferrante. Other people agree with Ferrante that she is entitled to have her book judged on its own merits, and not by reference to her biography.

As Joseph pointed out, it is interesting that the pseudonymous Elena Ferrante also gave the name “Elena” to her narrator who is also a novelist.

The name of the narrator “Elena Greco”, ie “Helen Greek”, conjures up Helen of Troy, synonymous with desire and violence, though in the books the men go crazy over Lila, not Elena. Lila has various names – Raffaella, Lina, Lila– reflecting shifting identities. In fact the books deal with the idea of a person having different identities in different contexts and with different people.

Elena Greco has little self-awareness. All of her sense of self relates to Lila.

Her impetus for writing their story comes from competition with the other girl, but also from the idea that it is the act of writing that pins down our experience. But in the end she asks whether writing can ever encapsulate life. 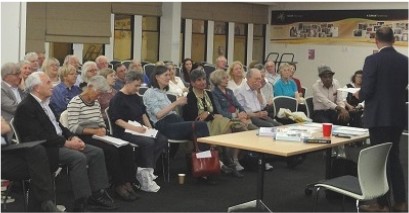 Part of the attentive audience for Joseph Falsone’s presentation