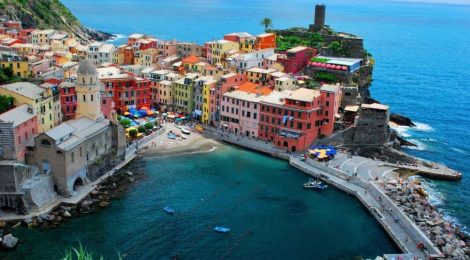 Liguria is remarkable for its stunning beauty with mountains plunging into the sea at every point to form the Italian Riviera, and for its benign climate.

It has been a tourist destination ever since English aristocrats discovered it in the nineteenth century.

However, despite Genova’s history as a maritime republic and the city’s achievements in banking the region’s economic fortunes are in decline: this in large part is due to its having the lowest fertility in Italy, if not the world.

Liguria ends with a flourish in the south.  The characteristic Cinque Terre cluster on a peninsula at whose point is Porto Venere.  From here past the port of La Spezia can be seen Lerici with its massive Pisan castle and the picturesque villages of Fiascherino and Tellaro.

Between Lerici and La Spezia is San Terenzo where the English poet Shelley lived; his friend Byron once swam the seven kilometres across the bay from Porto Venere and each August a swimming competition celebrates the event.

Because Petrarch, too, is associated with this lovely place it is popularly known as The Golfo dei Poeti.

Rory Steele is a retired Australian diplomat. He was the Australian ambassador to Italy from 1997 to 2001.

He is also the author of several books including Ghosts in the Helmet Trees and The Heart and the Abyss: The Life of Felice Benuzzi.

He has kindly provided this summary of a presentation he made to the Dante Society on 26 April 2018, entitled Lerici and the Gulf of Poets: A Ligurian Romance.