Browse: Home   /   Eugenio Montale: A reflection on the poem’s ending 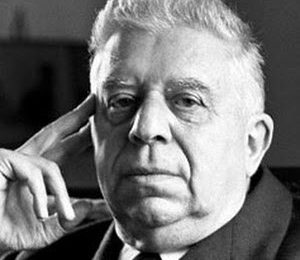 Eugenio Montale: A reflection on the poem’s ending

I remember showing Montale’s “La casa dei doganieri’ to a friend, who said, of its ending, ”I have felt like that sometimes”, and I concurred.  Perhaps, too, because I grew up near a beach and cliffs beset by high, crashing, waves, I have always loved this poem.  However, as I have never studied Montale in depth, I do feel hesitant in presenting the following interpretation of the poem’s ending, and if you feel differently, or would like to add your own thoughts, I am sure I, along with many others, would love to read them.

At the heart of the poem are threads of memory (‘un filo s’addipana’ …..Ne tengo ancora un capo’) when the poet returns to a time when he and his love would happily meet in the customs house, until ‘lo sciame dei tuoi pensieri’ entered; later, he is troubled that she neither remembers him nor the house as ‘altro tempo frastorna la tua memoria’. The poet repeats three times the refrain, ‘tu non ricordi la casa dei doganieri, ‘tu non ricordi’, ‘tu non ricordi la casa di questa mia sera’. Memories in this poem have a psychological, visual, temporal and elusive, even wobbly, consistency; as they unwind they capture his mind, but they offer him neither understanding nor hope. Worst of all is his realization that her memories are cut off from his.

The poet remembers the abandoned customs house, the woman’s thoughts entering, and two cynical images to describe his own feelings: the custom officers play dice where you can’t win, and an old mad compass which has lost its bearings, all images of a broken relationship. A further image is like a dream, of the smoke-grey house moving away with its wind vane spinning mercilessly. Suddenly, in the last stanza, the repetitive memory refrain of ‘Tu non ricordi’ is almost broken when the poet’s gaze is thrown onto the horizon. Here is found a completely new image, a petrol tanker, with its thin flame, sailing ahead.  ‘Il varco è qui?’ Is the way forward here, the poet asks himself.

Previously the poet’s unraveling memory thread was related to love.  Now we have something qualitatively and instinctively different. Love and Light merge to become abstract: those born into a Christian ambience will recall the well known expression of St Augustine’s, ‘You will light my lamp, Lord’.  For St  Augustine the tragedy for man is that such a lit  up moment lasts for so little time; and this, I believe,  is the case in our poem, when suddenly the poet reverts back to the house to a last, ‘Tu non ricordi la casa di questa mia sera, e io non so  chi va e chi resta’. He seems emptied out.

Illumination is a theoretical principle whereby the doctrine of human thought needs divine grace. It is the oldest and most influential alternative to naturalism in the theory of the mind and was, too, an important feature of ancient Greek philosophy. The poet, then, in that hopeful moment of seeing ‘il varco’ (the word often found in the poetry of Dante and Petrarch) draws on that light on the horizon to be more free and to move away. We are left with a final question: Can the poet survive the elusive and painful moment of, ‘E io non so chi va e chi resta’? Or can he accept stoically this situation as he returns in his mind to the customs house.

You don’t remember the customs house

on a ledge over a sheer cliff drop:

desolate it awaits you from that evening

when your troubles swarmed through

and restlessly paused inside.

For years the Libeccio bashes against the old walls

and the ring of your laughter carries no joy:

the compass has lost its bearings in this high risk venture,

and the calculations of the dice no longer add up.

You don’t remember; another time holds

your memory in a daze: a thread is unraveling.

I still hold its end; but the house is moving off

and on its roof top the weather vane

I hold its end; but you remain alone

nor do you breathe in the darkness.

Oh, the horizon in flight, where the thin flame

of the petrol tanker is lighting up!

Is the way forward here? (The breaker surges

over the crag to fall steeply away…)

You don’t remember this evening’s house

of mine.  And I don’t know who goes and who stays.

Eugenio Montale, born in Genova 12 October 1896 and dead in Milano 12 September 1981, was an Italian poet, prose writer, editor and translator, and recipient of the 1975 Nobel Prize in Literature.