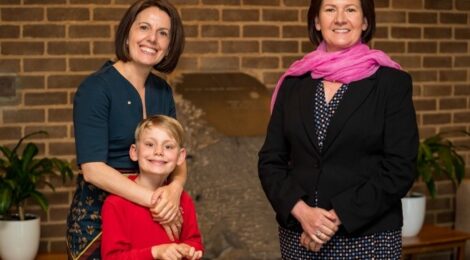 The Embassy of Italy in Australia, in collaboration with Australian Academy of Science, the A.R.I.A. (Associazione dei Ricercatori Italiani in Australasia) and the Italian Cultural Institute of Sydney organised an important conference Monday 15 November 2021 at the Shine Dome, Acton, ACT, entitled “The long journey of human mission to Mars and back to Earth”. 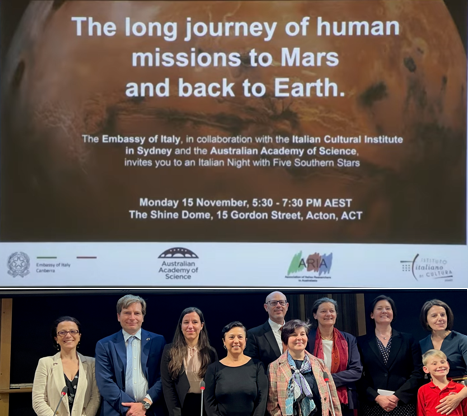 The event was the last organized by Anna Maria Fioretti, Scientific Attaché of the Embassy, before returning to Italy for the end of her mandate. She presented the conference together with Anna-Maria Arabia, Chief Executive at The Australian Academy of Science.

The Ambassador of Italy, Her Excellency Francesca Tardioli, extended cordial greetings to the speakers and all the people present.

The “Five Southern Stars”, indicated in the title of the conference, were all important Italian Researchers in leading fields working in Australia:

This is the link to see the complete event https://www.youtube.com/watch?v=dhNHXzfOFOE

At the end of the conference, Anna-Maria Arabia, Chief Executive of the Australian Academy of Science, has been awarded one of Italy’s highest civilian honours for strengthening the ties and friendship between Australia and Italy in the STEM sector and beyond.

Melbourne-born and now Canberra resident, Ms Arabia was presented the Knight of the Order of the Star of Italy (Cavaliere dell’Ordine della Stella d’Italia)[1]  by the Ambassador of Italy to Australia, Her Excellency Francesca Tardioli.

This is the citation: “Anna-Maria Arabia, born in Australia, has maintained a strong bond with Italian culture and has actively contributed in a concrete way to strengthening the ties and friendship between the two countries. Her excellent professional profile, the prestige she enjoys in the vast Australian and international scientific community, her constant commitment to promoting the role of science in society, her determination in encouraging the access of young people to scientific careers, while pursuing a gender balance, make her extremely worthy of receiving the recognition of the Italian Republic”.

Ms Arabia joins 14 others from around the world to receive the honour this year and is the only Australian among the group.

This is the link to listen to the complete acceptance speech of Ms Arabia https://www.youtube.com/watch?v=dhNHXzfOFOE, which follow the scientific reports.

Speaking about her family, she said: “If I may, I’d like to honour my parents and sister, while they are not physically with us anymore, I know they would be very proud to see my achievements recognised by the Italian Government as they were fundamental in my upbringing and in helping me gain a deep and rich understanding of my Italian cultural heritage. They supported me in every way possible and in all aspects of my life. My father left his family and trade in Aprigliano in the province of Cosenza (in the region of Calabria) in 1955 to travel to this faraway land to create a better future for himself and his family. And indeed, he did – this award is testament to that. Together with my mum they gave their everything so I could be educated.

There is nothing I have achieved today that could have been possible without their effort and determination and without their gift of education.

There have been many pioneers – women and men of Italian cultural heritage – who enabled the voices of Italians and other immigrants to Australia to be heard, at a time when they had no voice at all. They fought for many rights that Australians enjoy today”.

I undertook a short 2-month collaboration at CNR (Centro Nazionale di Ricerca). Professionally, this was akin to having a placement at CSIRO in Australia. […] Upon my return to Australia, I was inspired to work further with the Italian Australian community which led to the establishment of youth groups, more than a decade of voluntary work – first in the Melbourne community and then nationally. This led to representational roles with Comitato degli Italiani all’Estero (ComItEs) and the Consiglio Generale degli Italiani all’Estero (CGIE). […] I was fortunate enough to undertake a further 13-month research placement with the Mario Negri Institute for Pharmacological Research in Milan in 1999. I learnt skills there that I transferred to my research laboratory in Melbourne and that set in train important international collaborations”.

Ms Arabia concluded her speech with these words: “Finally, I’d like to recognise and thank my greatest achievement – my 7-year-old son Alessandro who keeps me balanced and reminds me every day why it is critical to reduce our footprint on this planet. I hope I am instilling in him the values of education, respect, courage, equity and kindness. I hope too he can continue to explore his cultural heritage and be as enriched by it as I have been”.

[1] Order of the Star of Italy. This distinction represents a particular honour on behalf of all those, Italians abroad or foreigners, who have acquired special merit in the promotion of friendly relations and cooperation between Italy and other countries and the promotion of ties with Italy.