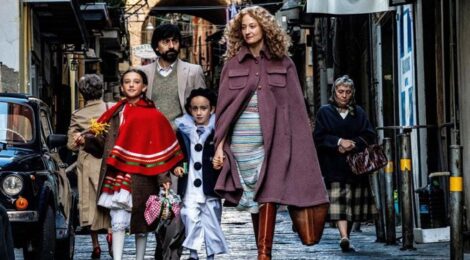 The film Lacci (The Ties), directed by Daniele Luchetti[1], was the first Italian film to open the Venice Film Biennale of 2020, and opened this year’s St. Ali Italian Film Festival.  With COVID restrictions, easing it was so pleasant to observe in the foyer-animated groups of people of all ages, smartly dressed, chatting and laughing, a Prosecco in one hand and a gift of a heavy bag of goodies in the other from Italian food companies, while making their way into the cinema.  The film festival had begun!

Lacci is set in Naples and Rome, in the early 1980s, its protagonists are a young, attractive, middle-class couple, Aldo (Luigi lo Cascio)  and his young wife Vanda (Alba Rohrwacher), whose opening scene sees them  returning home, Vanda superbly and expensively dressed, the children dressed  for a Befana party.   To an outsider they seem the perfect young family.

Then, the bombshell: Aldo confides to his wife Vanda that he doesn’t know why, but he feels compelled to tell her that he has slept with another woman. Vanda, quite shocked, reminds him of his wedding vows, that they promised to be tied together for life. She cannot accept this situation, and ‘the ties’ or ‘lacci ‘of the film’s title become strained, specially when Aldo leaves his wife and forms a passionate new relationship with his lover. The children are at first too young to be aware, but, naturally, as they grow older observe and absorb this tense situation, making for a further painful ‘laccio’ as the film unfolds.  The theme of tying knots even becomes a comic metaphor when the small son ties his shoe laces in a knot different to other children, (lacci also means laces).  Within this overwrought atmosphere, the film’s title, The Ties, begins to unwind like a string, or rope, or noose that pulls more tightly around the characters as the hatreds intensify. Interestingly, Aldo and Vanda are not particularly ‘nice’: his response is to be cold and uninvolved, hers is to fight hard to keep her marriage, and yet she reveals only bitterness.

Similarly, plots in books thicken and unfurl as they proceed over a long period.  As a young man Aldo enjoyed reading stories to his young children, he worked for a publishing company, and over time the couple’s inside apartment walls are lined with books.  A locked box, book shelves, a cat, fashionable clothes, the film continually creates its own rich evolving imagery as the drama unfurls over three decades. Take, for example, that  fashionable thick woollen cloak and high boots seen in the opening image of Vanda with her husband and children: here her clothes act as  a kind of  fortress while  in summer her choice of fashionable light flounces in summer dresses that end in a tie and  knot around her neck, also  typical of the fashion of the seventies, makes her alluring yet wrapped up in herself and unapproachable. Now, let’s swing back to Aldo’s new young love:  on the contrary, she enjoys being admired when she is in the nude. He has placed his photos of her in a secret box, then enjoys feeding on them over time when alone, even after this former love had broken with him.

Would I recommend Lacci?  Yes, the film pushes us to witness and recognise an intense psychological drama, with all its cruelty, in a Neapolitan family over two generations. This couple belongs, too, to our own society; to be a witness to such a dynamic is a rare privilege.

[1] Daniele Luchetti was born in 1960. He debuted as assistant director for Nanni Moretti in Bianca (1983); his subsequent work was the successful The Yes Man (1991), featuring Silvio Orlando as the host writer of a ruthless politician, played by Nanni Moretti.  It was seen as a forecast of the Mani Pulite corruption scandal that struck Italy the following year.  The film won four David di Donatello awards – Luchetti’s feature film of 1995, La scuola, was inspired by Domenico Starnone’s work, as was Lacci, based on his 2014 novel of the same name. To raise the bar somewhat, Starnone is the husband of Elena Ferrante, the famous Italian novelist who set her work in Naples at the same time as this film. The tortuous and unrelenting nature of the film Lacci has led some to think that the book on which the film is based is related to the popular novels by Elena Ferrante.